A WET Wednesday evening in early February found TOM in one of Greater Manchester's far eastern outskirts. Ashton-under-Lyne had, earlier in the day, been a bustling town centre but at 6pm people are scarce; traffic isn't.

Ashton’s dining ‘jewel in the crown’ of remains Lily’s, who having boldly sold Indian vegetarian food in the town since 1972, have very recently expanded into newly created larger premises.

Named after the now deceased matriarch, the family business has developed from a secret local takeaway with a few tables, to a renowned dining destination. Easy to overstretch, though. Hence our visit to check out the changes. 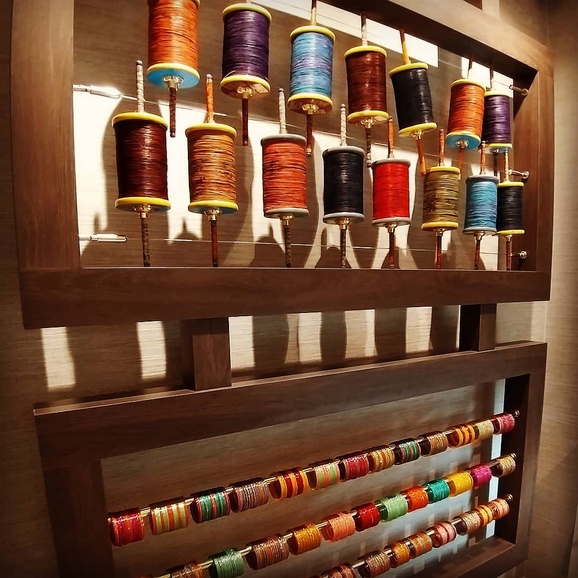 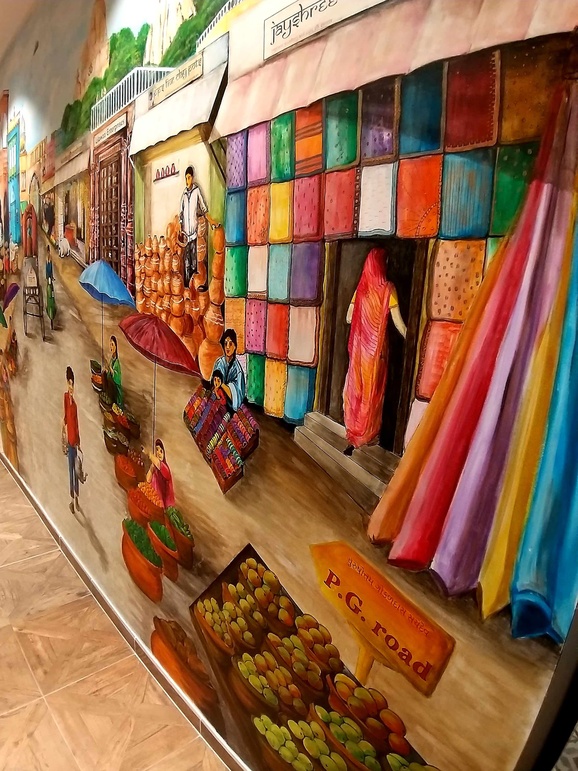 And the art doesn’t stop there. A stunning Indian street scene mural dominates one wall of the  dining room – all in all a step-up too on the original cafe down the road.

Waiters wearing smart Indian-inspired uniforms, buzz around in their mustard coloured jackets over pristine white shirts. It felt very busy, with a mixed crowd, including an 80th birthday party, all vying for their attention. 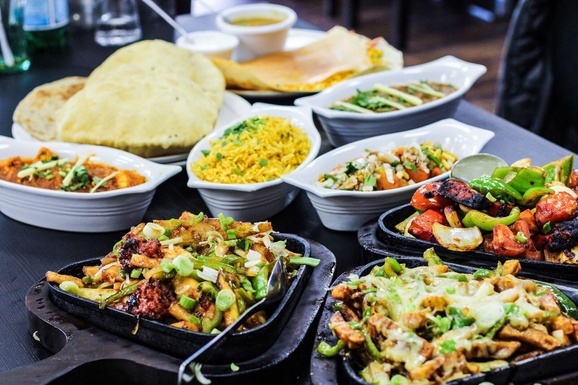 The equally expansive menu, features house specials such as masala dosa, sizzling plates of paneer, bhel puri, samosa, pakoras and kachori. The less adventurous can sample chip-stuffed naan bread and toasties. Sandwiches have their own menu page and radically, in a nod to other Asian cuisines Szechuan fried rice and other Chinese dishes are available.

Drinks include Asian lagers, green teas and plentiful soft options, including a wonderful Mango lassi, ideal companions to the spicy Indian flavours that are typical of the Gujarat region.  The wine list is basic but fulfils all needs – house reds, white, rose and proseccos, most available by the glass, as well as the bottle. 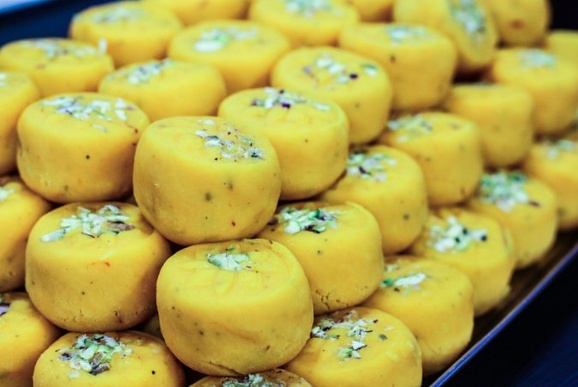 The recent Mancunian appetite for Indian street food has not escaped ToM’s radar. The queues for Bundobust in Piccadilly and The Tiffin Room near Home, pay tribute to this.

We wondered loudly if the old timer Lilys, would match up with these quirky newcomers?

Popadoms arrived quickly – delicious, crispy and accompanied by superb pickles and chutney, pricey at £4.50, but worth it for the extra flavour.

We resisted the temptation to say "bring it all on" and plumped for some house specials. The orders went straight through to the kitchen via i-pads – a sign of the new Lily’s intention to deliver. 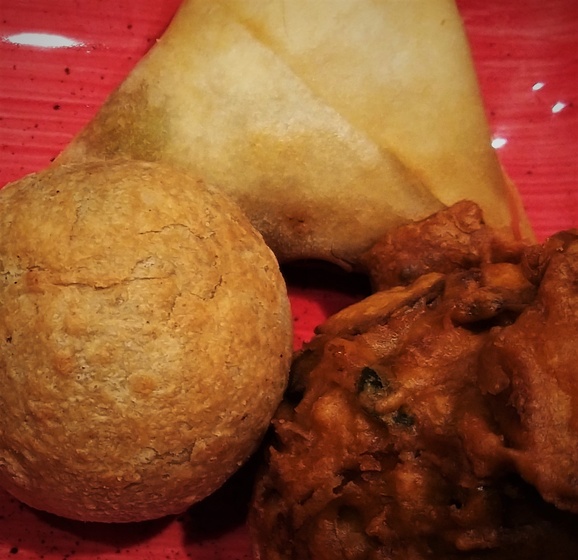 The mixed starter plate of Punjabi samosas, bhajiya and pea kachori was perhaps smaller than hoped. One piece of each for £3.75. I've had better onion bhajiya, but the samosa was spot on and the kachori an absolute delight. We added a separate order of very moorish deep fried crispy okra, with a delicious light batter.

For my main I went for the House Special Sizzling Plate of paneer with vegetable Manchurian and cassava (main image). This included Chinese flavoured cauliflower balls, reminding me of the flavours in a Cantonese sizzling steak, accompanied by fine cut peppers and onions. All delicious, spicy but not overpowering, while the paneer was crispy outside and soft in. Great value value at £10.50.

My partner, a veggie, chose a Baingan Bharta – a crushed aubergine curry. It  was stunning with a delightful spicy flavour, and at £6.99 a bowl big enough for sharing.

For our fill ups we went for a large, succulent peshwari nan, full of coconut paste (£3.25)

Our teenage daughter decided she couldn't face curry and plumped for the nan bread with chips and mayonnaise. It was massive and far too much for her to eat; at £5.25 we should have guessed. 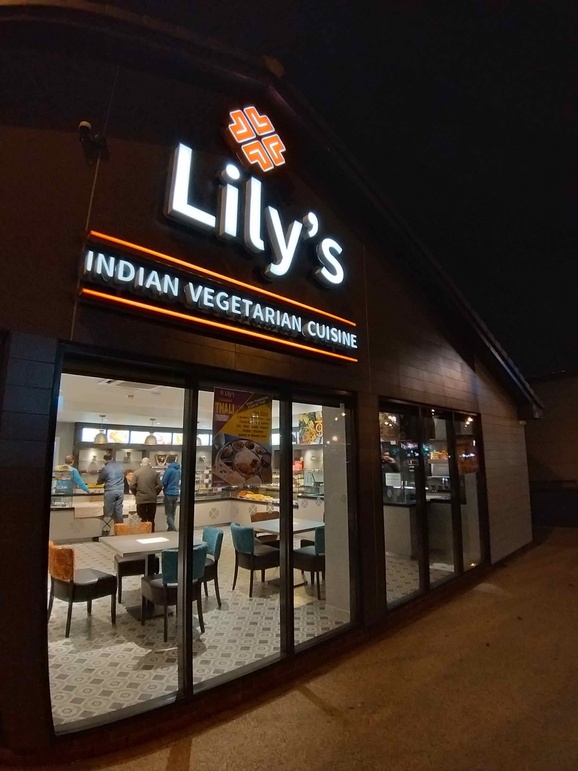 The whole enjoyable experience seemed over alltoo soon. Except it wasn’t.The sweet centre beckoned. Rasmalai had been spotted among the mountains of sweet displays.

A take-out portion at £ 2.90 proving a fine "at home "dessert for all three of us

Lily’s really is a splendid place to relax and eat. Great value too. The bill before a well deserved tip was £50.  It won Best Veggie Offering in the 2018 Manchester Food and Drink Awards and could easily win it again.

In answer to how does it compare with its new noisy neighbours serving Indian street food? Very favourably.  The tram goes to Ashton now so there’s no excuse.