OUR long overdue return to The Midland Hotel’s ‘other restaurant’ coincides with the announcement of a new Simon Rogan restaurant project up in The Lakes – Henrock at boutique hotel Linthwaite House.

A little under three years since he quit responsibility for the hotel’s major dining rooms  Rogan’s stock continues to rise, while The French maintains a high profile under successor Adam Reid.

So what of Mr Cooper’s across the foyer? The Rogan regime quickly banished nightmare flashbacks of its canary yellow decor as Nico Central in the Nineties. And if one end seemed more a homage to a garden centre than a celebration of the eponymous market garden that once occupied the neighbourhood, well, who cared if the food was that damn good. If occasionally maddeningly ‘fusion’. 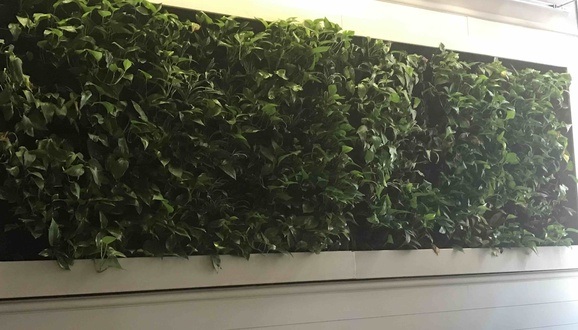 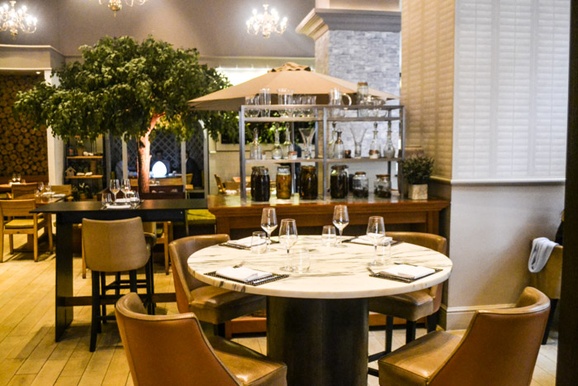 Since Rogan’s original Cooper’s chef Gareth Jones left it has seemed to drift, so a big task for new young head chef Rebecca Richardson. She was previously at the Marriott Hotel & Country Club in Worsley, whose menu, to put it kindly, does not kindle excitement.

But we liked the look of what she is proposing for her new billet, so here was are a dining room that seems more discreetly lit, more comfortable than of yore. And its benefiting healthily from the latest growth market – graduation meals. Initial service was beyond distracted, but we stayed calm and ordered a bottle of reliable Bolla Soave (£36) plus a couple of snacks. 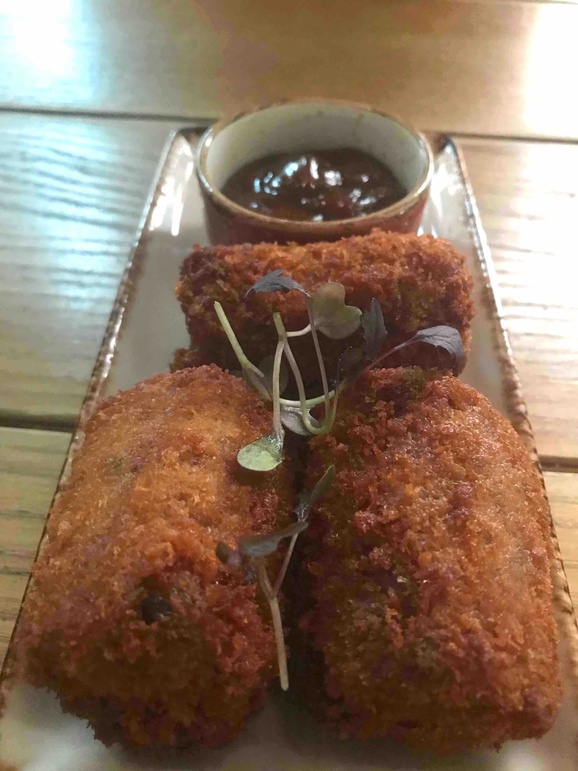 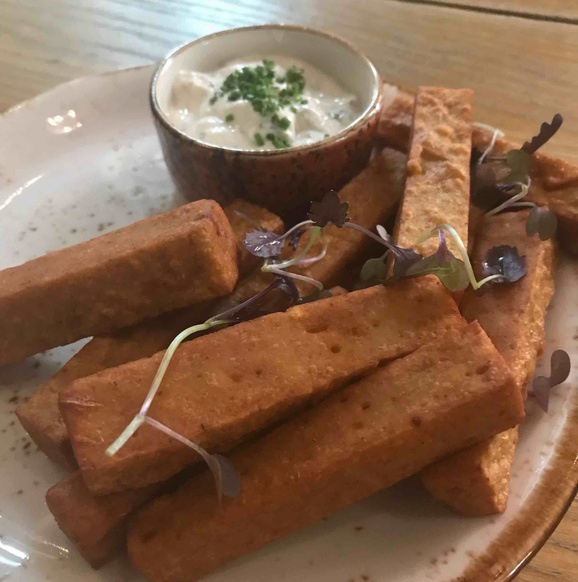 Pork and lovage croquettes with a smoked apple sauce (£4.50) is a neat idea, well executed. It’s hard to stop lovage dominating in its coarse celeryish way, but this was subtle. We asked what constituted fellow snack chickpea fries (£5.50) and were told think felafel. On arrival these were fat chips made with a chickpea flour mix. Even with a yoghurt dip the most tasteless mouthful of the year. 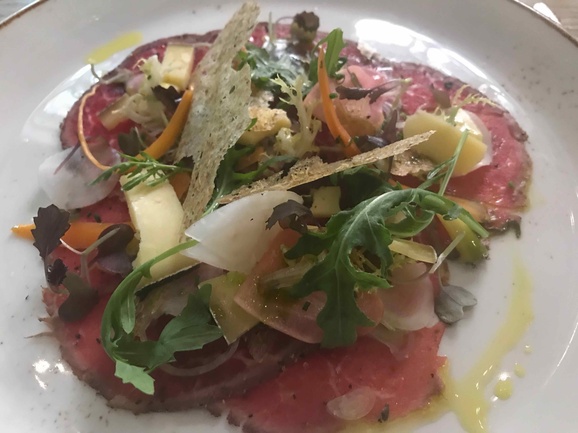 The starters put us back on safer ground. If the pickle baby veg on my beef carpaccio (£9.50) are on the sweet side and the cheese shavings hardly wispy, the beef is tender and tasty. The new regime has returned to using an in-house butcher and age their Yorkshire Back Angus/Limousin beef for a minimum of 28 days

Perhaps the pork belly (£8, main image) didn’t deserve quite as much creamy celeriac slaw but it comes crispy as advertised with a cute little beignet of black pudding and tangy apple puree. Our spirits rise. Even though we realise an expected lunch hour is likely to extend beyond the two hour mark, so stretched are the staff. 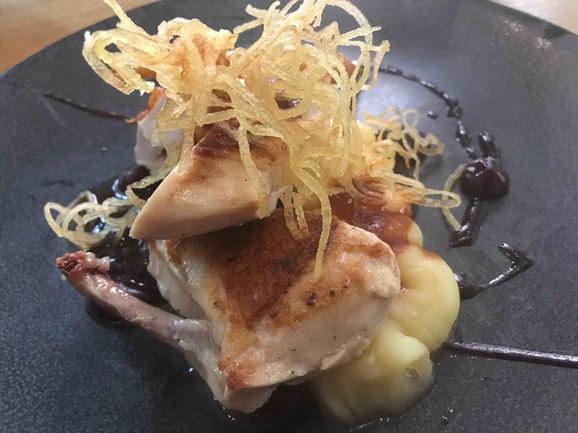 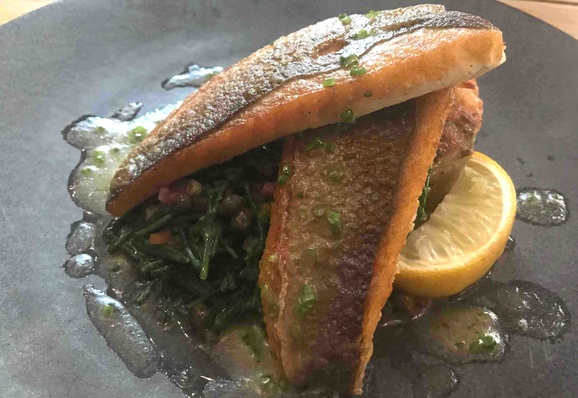 Critics to a man (or woman) never order chicken for review purposes, but this time I do. It’s Goosnargh, which is good, with potato puree (silken, also good) yet the lure is ‘with kirsch cherries’. OK, make that work. or mango with cod further down the menu. Not a great fruit in savouries man.

As it turn out the cherry presence is barely in evidence and the chicken (£18) itself is delicately intense in flavour. My partner’s sea bass fillet, at the same price, likewise, just the absence of a crisp skin letting it down. Samphire and bacon was a powerful accompaniment that Rebecca pulled off. 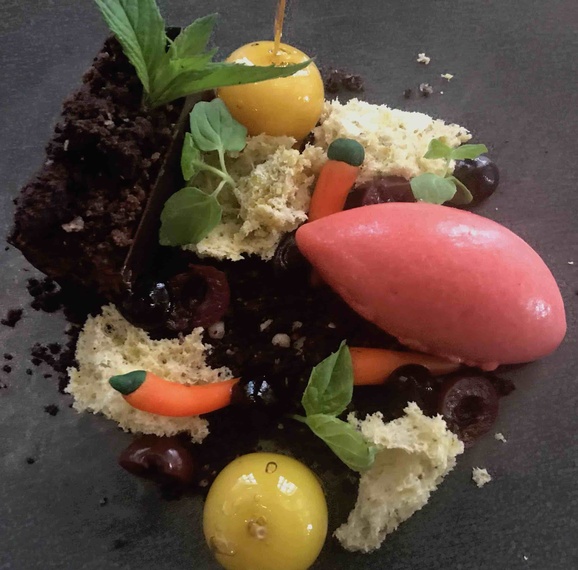 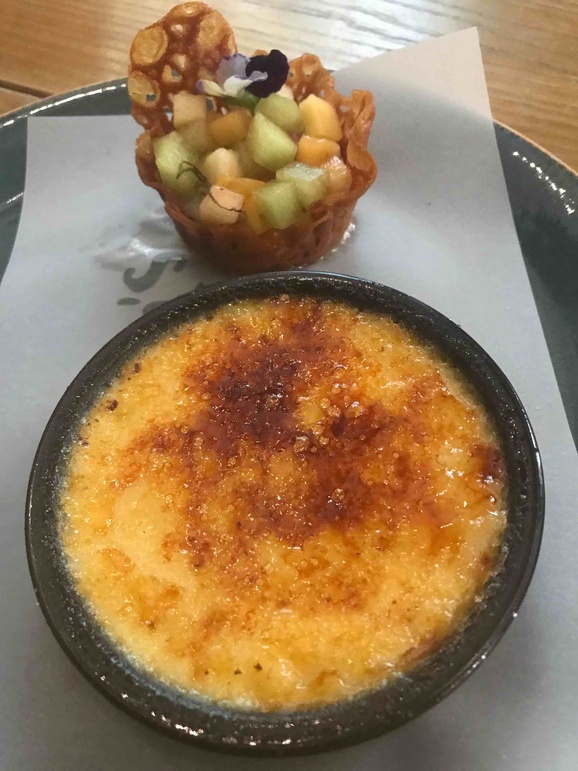 From the short dessert list The Allotment (£7.50) is an Instgrammable collection of mini-treats on a bed of chocolate ‘soil’ (forgiven). The combo of choc cherry kirsch mouse, marzipan carrots, strawberry sorbet, baby toffee apples and micro basil mint is a playful star.

A glazed vanilla brulee with Grand Marnier was spot on too, even if the tuile basket of diced fruit accompanying it didn’t seem essential.

Overall, it was good to see Mr Cooper’s buzzing, even with a cast of captive mortarboards to thank for it. Now, let’s see it roll back the years with a little more daring on the menu.