A big Arndale foodie welcome for Firebird Hope and Kiosk

WE knew Dan Hope, a while back, when he was one of the Mr Fixits in the Manchester Arndale Apple Store. Now he’s back in the Market there, hosting a new outlet for his acclaimed fried chicken project, Firebird Hope. It’s next to Pancho’s Burritos and is the latest in a series of street food heroes, who have found a congenial roost in the Arndale.

Another new indie arrival in the mall proper comes from the man behind Ancoats General Store. Not content with expanding horizons to launch Stretford Foodhall owner Mital Morar hs opened new venture Kiosk in what was FIZZ! by Frizzenti, a prosecco bar unveiled last year as part of the £11m redevelopment of Halle Place. That didn’t last long unlike neighbours Archie’s, Barburrito and Wolf Italian street food. Still the development of this food quarter has been a slow burner.

Kiosk will serve a menu of locally-made cakes and pastries, brownies, butterscotch flapjacks and millionaire shortbread alongside coffee from Ancoats Coffee Co (also spreading themselves city centrewards – read about it here). Keeping it local (and alcoholic), Manchester Union Lager is also promised.

Your’e more likely to find ToM at the Arndale Firebird Hope. We bumped into Dan at their IndyManBeerCon stall and reacquainted ourselves with how good their signature chicken – free rage ethically sourced – can be. The plant-based fraternity rave about their seitan version. Both sandwiches, vegan and meat, come with koji mayo, agave house slaw and ‘quickles’ (fast pickled cucumbers). Might even make us desert our true Arndale street food faves, Holy Crab. 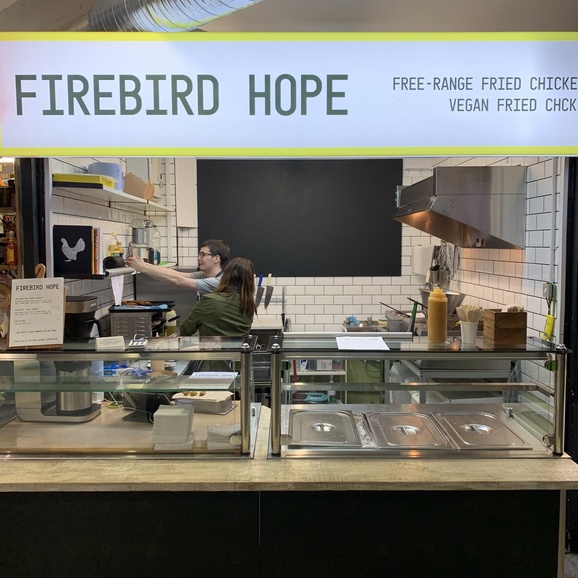