Celebrating Pad Thai – is Jūb’s the jewel in the fragrant crowd?

PLAEK Phibunsongkhram – now that’s a Scrabble score. It’s also the name of a 1930s Field Marshal whose main claim to fame (after ensuring his native Siam’s name was upgraded to Thailand) is his creation of that country’s national dish – Pad Thai. The cook-off he commanded was designed to wean the nation off the wheat noodles of perfidious Big Brother China.

Since when the winning salad’s universal popularity can’t be gainsaid. That it’s a kingpin in  the rise of the Wagamama Dynasty shouldn’t be held against it.

Rosa’s Thai Cafe will  be bringing its own version to Deansgate from the last week in February. It was one of several impressive dishes ToM enjoyed on our recent fact-finding mission to the brand’s original East London site. Siam Smiles or Try Thai loyalists in the office have since been insisting Rosa’s will never replace either in their affections. 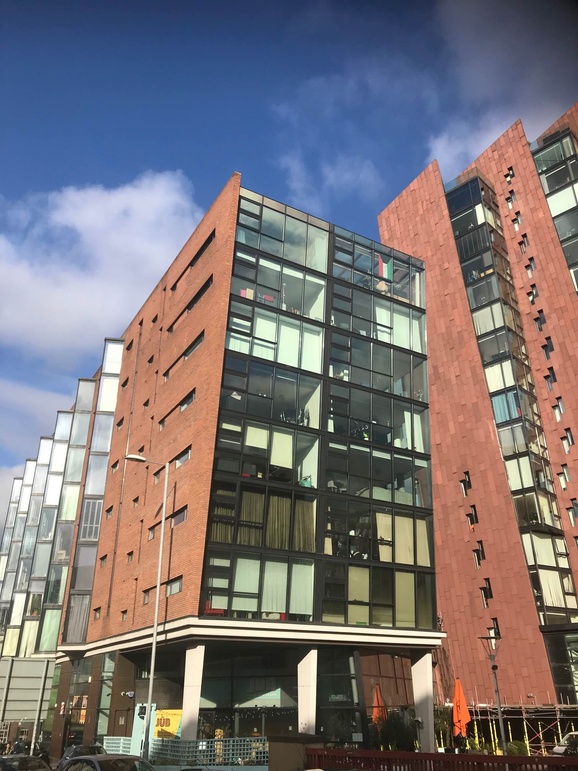 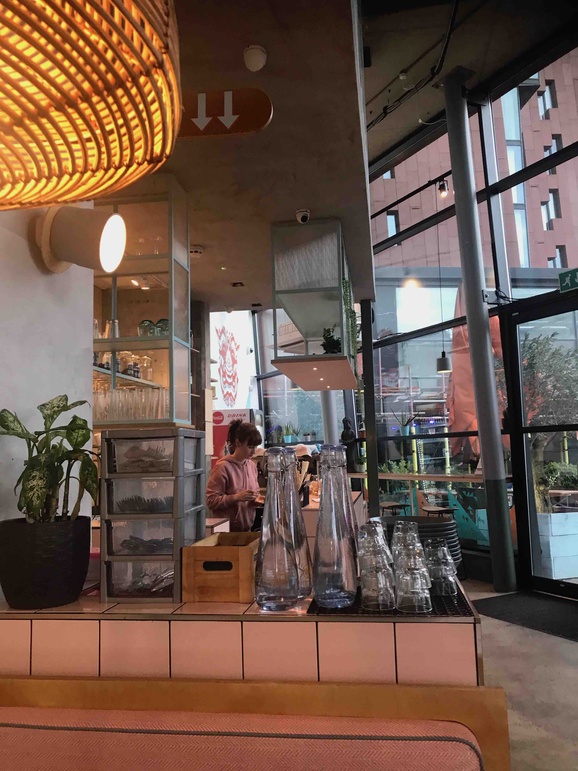 None of us, though, had visited a casual Thai establishment that has many social media adherents. Jūb Thai’s situation on Great Ancoats Street further along beyond the derelict Central Park doesn’t help. And wasn’t it previously all-day joint Vivid Lounge? Same owners still but vividly (sic) revamped with a central tree and only open from mid-pm at weekends, later the rest of the week, now concentrating on its Thai culinary repertoire 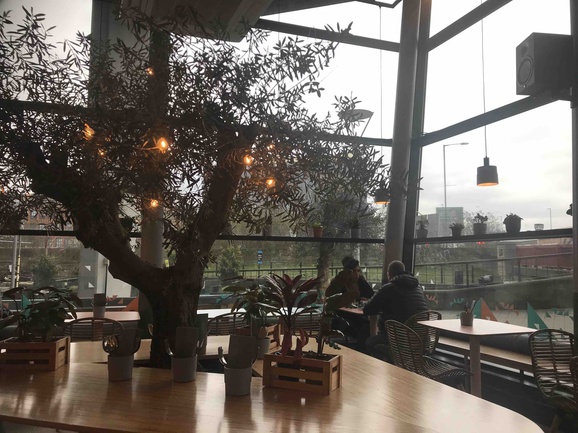 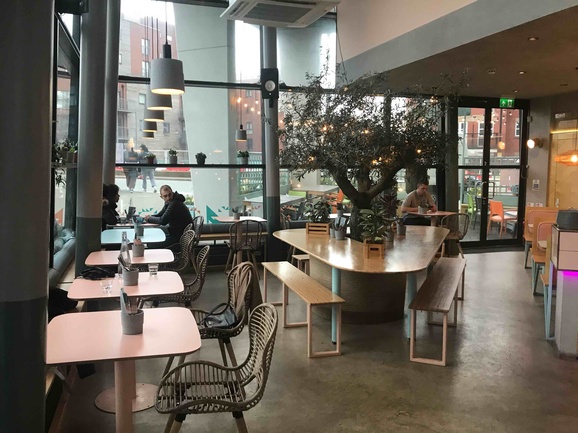 We approached it via a bread run to Pollen Bakery through the bright new urban pastures of Islington Wharf –  dappled waterway revelation in itself (well, mostly). The intention was to work our way through various small plates to get a balanced verdict. But we were smitten by Old Phib’s legacy – the best Pad Thai we’ve eaten in town. A little place in downtown Kanchanaburi was better, but that’s a trek. 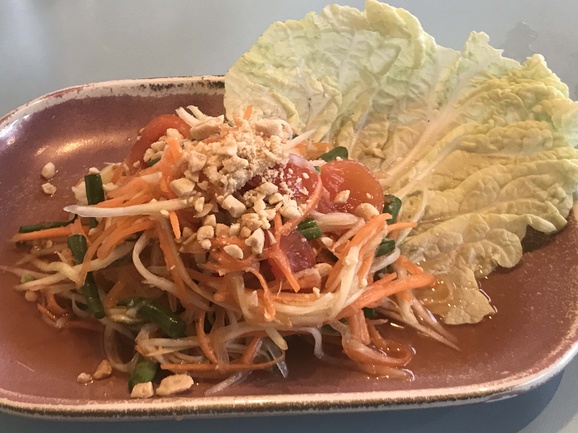 After sharing a refreshing but perhaps under-spiced papaya salad, we serendipitously settled on the £14.50 Pad Thai because the rest of menu was a bit regimented. Pick one dish from Group A, one from Group B and a final carb from C and it’s a tenner. Drinks were extra but since it was far from cocktail hour and most of the beers, including the house Jub Jub lager, were scribbled out we drank tap water. The wine list has a biodynamic presence – this is Ancoats, however far-flung! 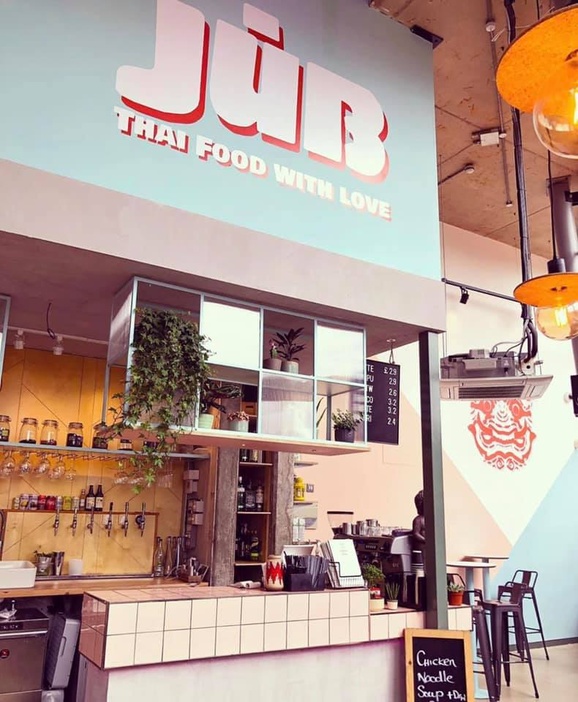 Jūb means ‘kiss’ and they’ve planted a large smacker on their own cheeks by proclaiming on their website they’re ‘the best Thai eatery in Greater Manchester’. As part of their sustainability approach they list the legendary JW Mettricks of Glossop as their meat supplier;  mainly pork, it appears. 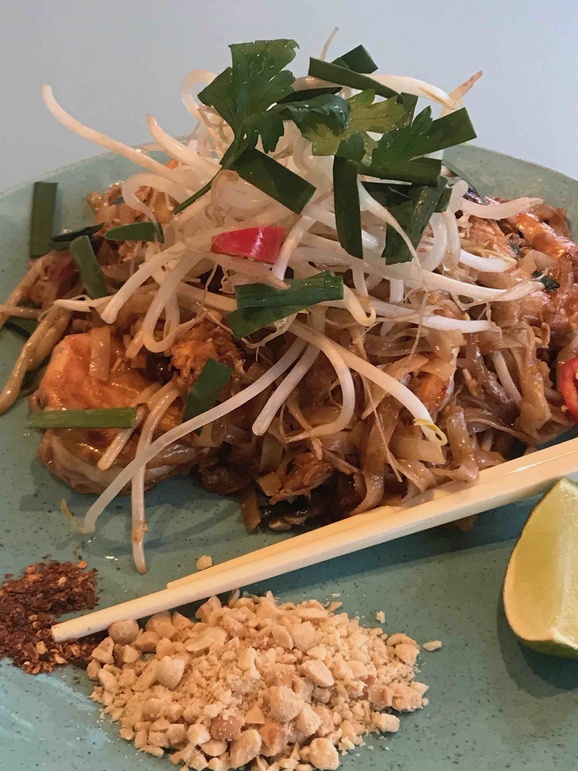 Congratulations to their seafood supplier, though. The abundant king prawns on the shell dotting the Pad Thai were firm and intense. The noodles had benefited from cooking in a tamarind broth; palm sugar, fish sauce, red chillies, chives building up the complexity, crushed peanuts on the side, a tangle of beansprout. Perfection.