Champagne, cigars and Chester the hound – welcome to Dakota Manchester

OUR sneak preview of the Dakota Hotel, officially opening on Saturday, May 18, was built on their premise of “bringing a touch of Mayfair to Manchester”. With our focus on food and drink ToM was on our own mission to hunt down the menu still absent from the latest Dakota’s website.

We’d sampled the food at The Dakota Grill on a trip up to sample their Glasgow operation and it was far superior to most hotel chain fare. Founder Ken McCulloch’s favourite champagne is Taittinger and the staff in the opulent dark bar were lavish with our welcome pours after we posted selfies with reception’s quirky wicker pooch, Chester. Expectation soared. 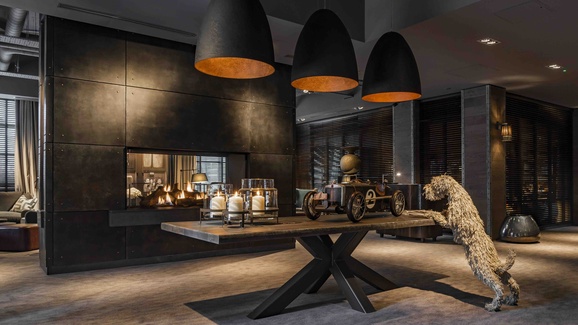 We can’t say hopes were dashed because the lunch that followed from a limited a la carte offered enough substance (steak and pea/ham soup the stars) to suggest The Grill here might well become a destination restaurant in its own right (there is a separate entrance off Ducie Street). But they’d still not finalised that menu. 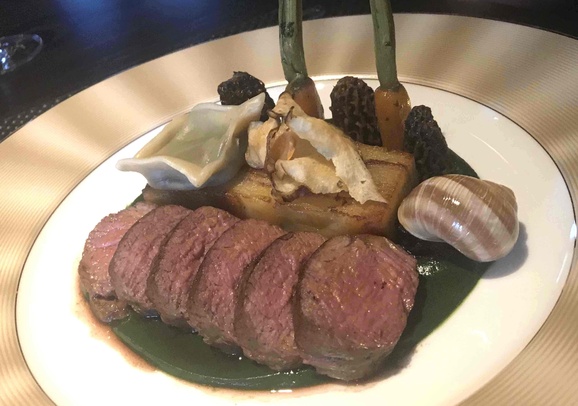 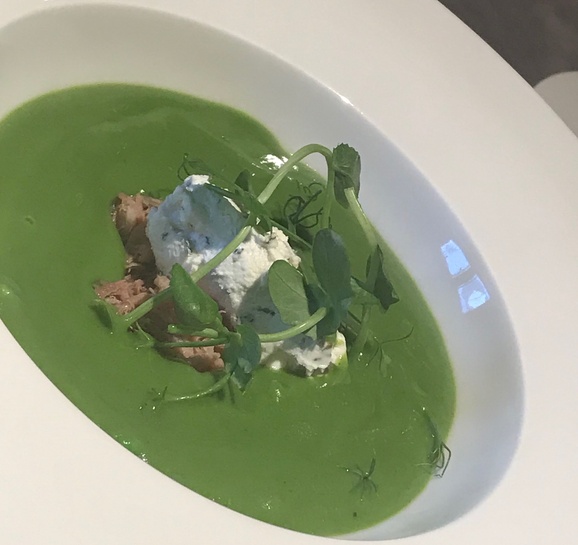 Still the Havanas for the outdoor Cigar Garden were in the lacquered humidor and Clark Gable and Jimmy Stewart were adding monochrome glamour to the intimate Champagne Bar. 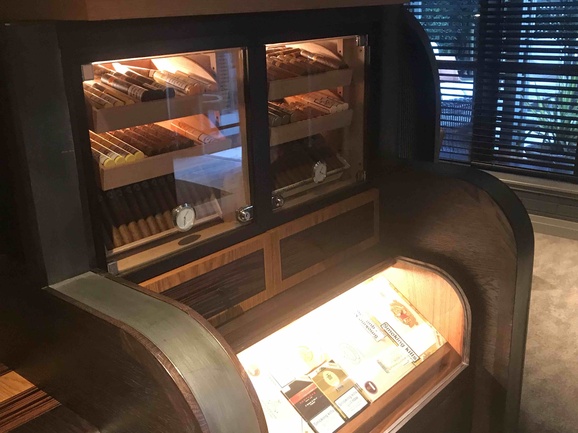 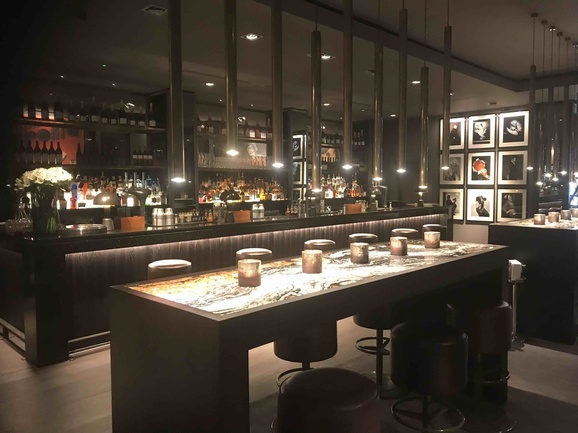 The whole visit was alive with a tense sense of purpose. With just days to the opening of this £30 million hip but affordable hotel there was lots of ‘work in progress’ going on. We couldn’t ascend to the top floor where final touches were still being applied to the Deluxe Suites and strictly out of bounds was the panoramic penthouse Grand Deluxe Suite, set to be the largest and grandest suite in the city. (We wanted to bounce on the Emperor Size bed and languish frivolously in the sunken bath.

This Dakota is twice the size of the Glasgow one – 137 luxury bedrooms with 20 luxury suites and there is a real sense of craftsmanship meets luxury created by interior designer Amanda Rosa. Though I just wonder whether vegans might get a mite uppity about the leather-panelled lifts. 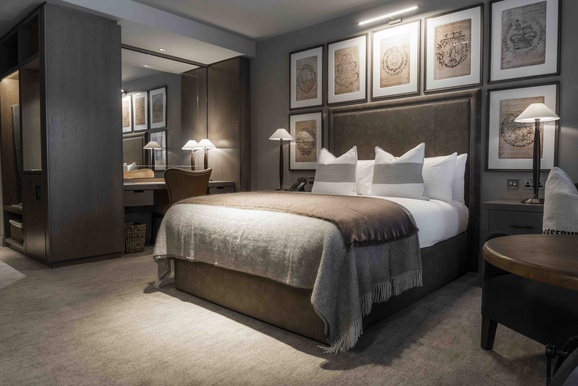 Classic Rooms, with double or king-sized beds, see plush furnishings and powerful rainfall showers. The Garden King rooms, on the first floor, offer a private garden terrace, chic furnishings and ensuite bath with separate rainfall shower. There are two Junior Suites, boasting an eighth floor balcony, king size bed and ensuite bath with separate shower.  One step up are Signature Suites and then the Executive Suites, which we admired for their dual-aspect, waterside views. 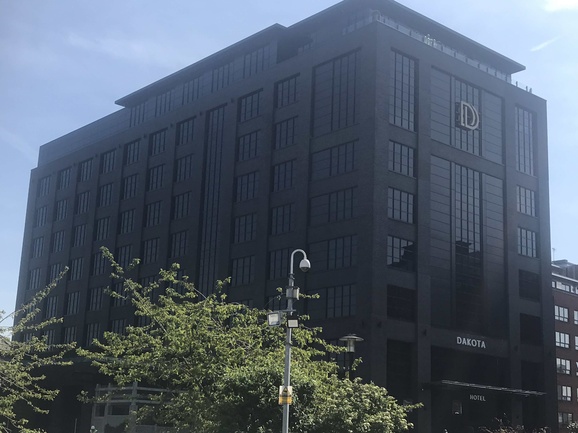 Those top floor Deluxe Suites provide an open living space, dedicated seating area, plush bedroom with Emperor size bed, walk-in-wardrobe, ensuite bathroom featuring secrecy glass, roll top bath and separate rainfall shower. And that Grand Deluxe Suite? You’ll have to book it to find out – unless we get to report back first! 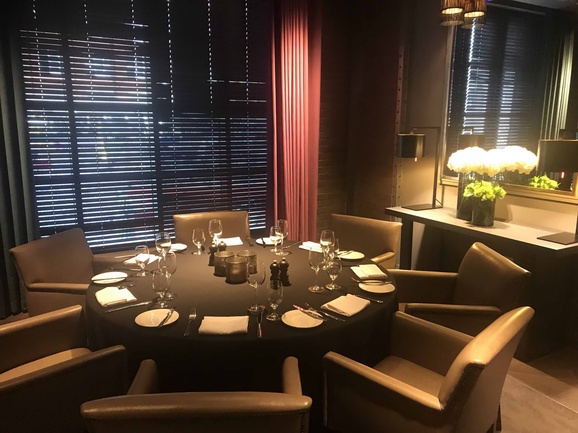 You’d probably never want to leave that top floor but, if your inner hermit fancies, you could book one of The Dakota Grill’s private dining areas, available for exclusive use for parties of up to 24 or party in the pre-bookable Champagne Room before hitting the cognac and cigars in that exclusive garden. 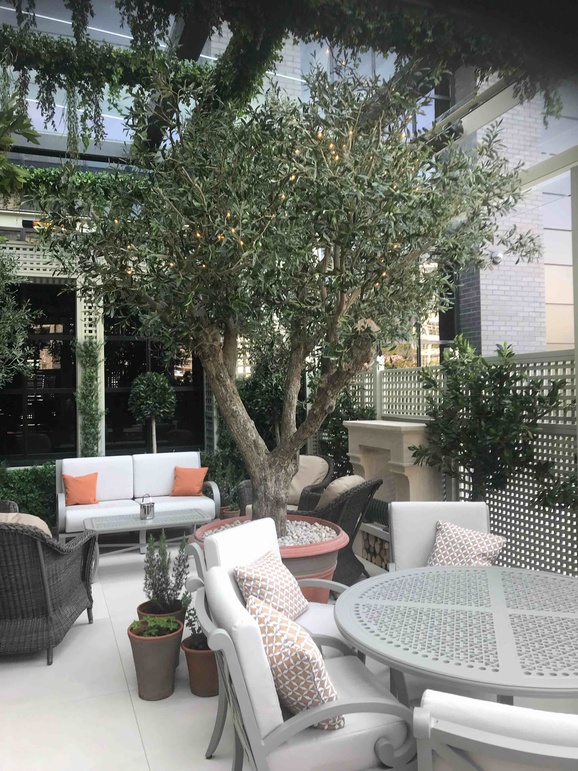 Is this really what they get up to in Mayfair?