First look at Stockport Produce Hall – does it deliver?

IN its opening week Stockport Produce Hall has had a stormier ride than Brexit. Veteran restaurateur/entrepreneur Steve Pilling delivered the food and drink deal he’d won the contract for in the Grade II listed building opposite the town’s market. Then it was a case of light the blue touch paper as the Manchester Evening News pointed out what had been apparent from the start of the development – the former fish and meat market transformed into a 150 cover food hall isn’t hosting an array of independent traders. 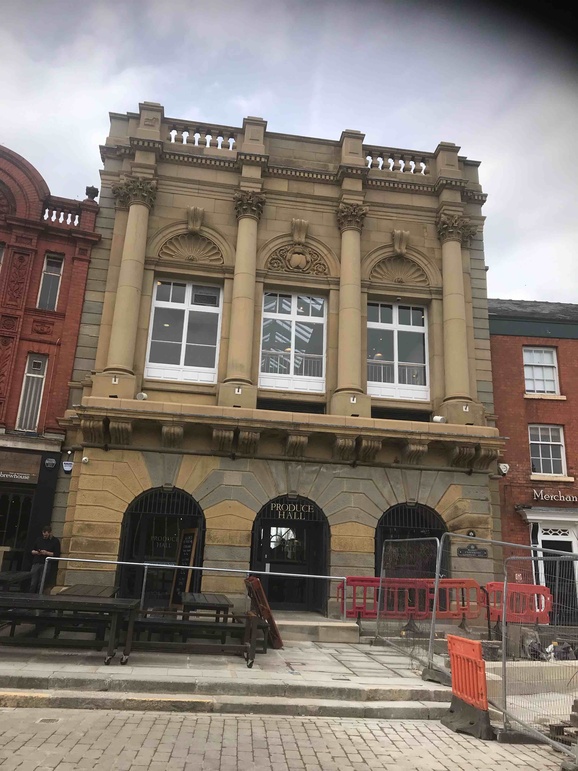 At the launch all the counters, bar one, Black Market Espresso Co, is linked to Steve’s other operations, most obviously Roost and La Cantina in Heaton Moor. Cue a social media sh** storm about monopolies, appropriation of rival street brand names and the still simmering resentment that the town’s Foodie Friday team didn’t win the project.

The public didn’t seem to care, cramming in for the novelty and drinking the venue out of beer on the first day. It was busy when we took our first peek three days later on a Friday afternoon. Teething troubles were still happening. A broken lift meant it was proving difficult to clear away glasses and plates on the mezzanine floor with its views across Stockport Old Town. I suspect too that the fragile wooden garden chairs might struggle to cope with the ampler backside.

First impressions? Smartly done, incorporating some original architectural features (we love the black and brass spiral staircase up to that mezzanine) but without the wow factor attached to Mackie Mayor in the Northern Quarter, upon which the general look, individual outlets and their menu signage, has obviously been based.

As with all his projects Steve Pilling has obviously done extensive research, He’d been round a similar project in London, the Victoria Market Hall outside the rail terminus. Despite the corporate backing this has a ramshackle bustle with a strong ethnic cuisine presence.

That’s all to come in The Produce Hall, says Steve, who has plans for  a Tel Aviv style hummus bar and a South East Asian counter. “I’m looking at  four year plan as the whole area around the Market Place develops. You can see the start of it with our immediate neighbours, Project 53, the restored Angel pub and, of course, The Bakers Vaults. For the moment it has been case of getting an offering that works for the public. ” 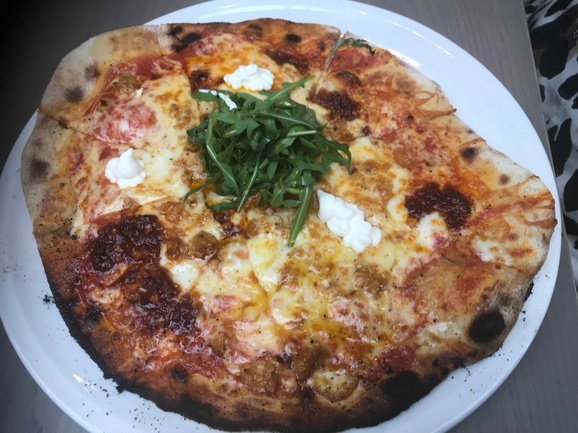 As well as the coffee counter that offering also features fish and chips from Oh My Cod, tapas from Poco Mas, Brood and its roast chickens, Pie-Curious with an array of pies and pizzas from Dough Boys’ mosaic oven. The traders’ roster is completed by Fat Louis (burgers), Flat Iron Steak and pasta bar Foccaine. 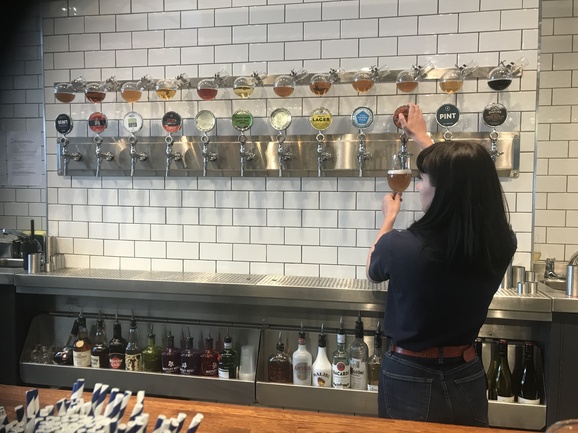 The wine offering is concise but crowd pleasing and the beer bar offers a mixed bag of local craft ales, but with 18 keg lines you’re sure to find a favourite. Come the warmer weather you’ll be able to sip these on outside tables on the Market Place.

So the Produce Hall is in its infancy and has to be given the chance to grow. It’s good to see community initiatives attached such as the collaboration with Stockport Homes, offering training and employment in the Hall to ex-military workers and those who have struggled with homelessness. 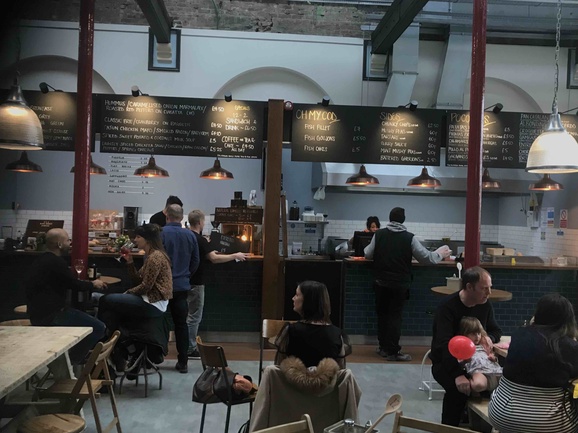 Our initial verdict is it’s good to see another family (and dog) friendly venue. If the food and drink lags behind Altrincham Market House and Mackie Mayor, it is more affordable and accessible. Let’s not forget, too, that the pioneering indie traders at Nick Johnson’s first  venture spawned most of the ‘new’ food operators at the latter and that tight formula may well continue at his next project, transforming Macclesfield’s Picturedrome cinema and bingo hall. European-style food halls – the crock of gold at the end of the rainbow.