IT seemed simple enough as the biggest ever British Game Week loomed. Compile a list of the best restaurants to sample dishes showcasing these most sustainable and healthy of meats. We didn’t have much luck in Manchester. Partridge on the menu at restaurantMCR, venison at Adam Reid at The French, a breast of pigeon as part of the Gamekeeper’s Breakfast at the Albert Square Chop House, but that was about it.

Fortunately, before the Week ended on December 1, we receive an out-of-town invitation to Holbeck Ghyll in The Lakes, where young chef Luke Newton (below) is a strong supporter of the its organisers, the British Game Alliance and has been given his head to run a one-off celebration of fur and feather. 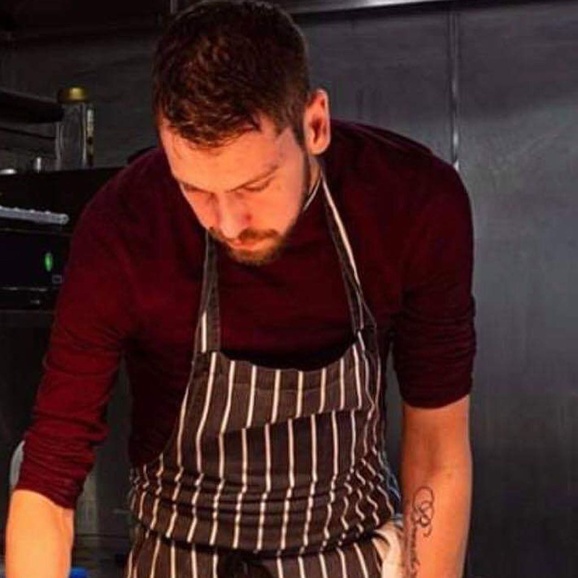 So luxury lodgings with a spectacular view of Windermere as well as a ‘Taste of Game Dinner’ featuring pigeon, partridge, venison and mallard? We couldn’t resist and were rewarded with eight courses that convincingly made a case for greater consumption of affordable, tasty produce far removed from factory-farmed chicken and the like.

The setting for all this was quite ravishing – as was the welcome for us and our companion chihuahua, who shared one of the Lodge suites with us. The Miss Tiggy-Winkle Suite offered him treats and a seriously comfortable pooch bed. He was also treated to  doggie bag of wild mallard (but more of that later) 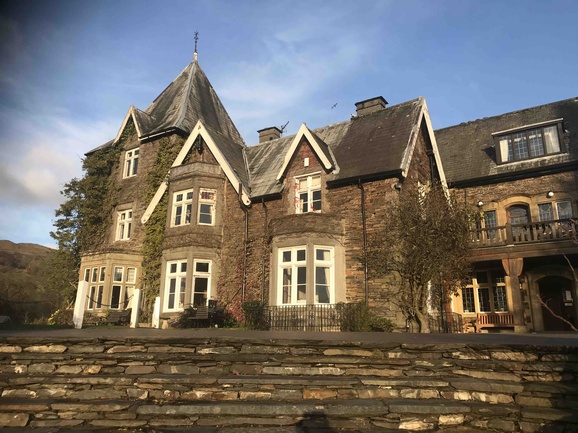 You may remember Holbeck Ghyll as one of the six northern hotel/restaurants visited by Steve Coogan and Rob Brydon in the first series of The Trip.

That was 2010, around the time this archetypal country house hotel was bought by Manchester businessman Stephen Leahy. It held a Michelin star between 1998 and 2014 but since the departure of veteran head chef David McLaughlin there has been a lack of continuity in the kitchen. Hopefully the arrival of Luke Newton is remedying that. His procession of game dishes certainly demonstrate a strong bond with local provenance. 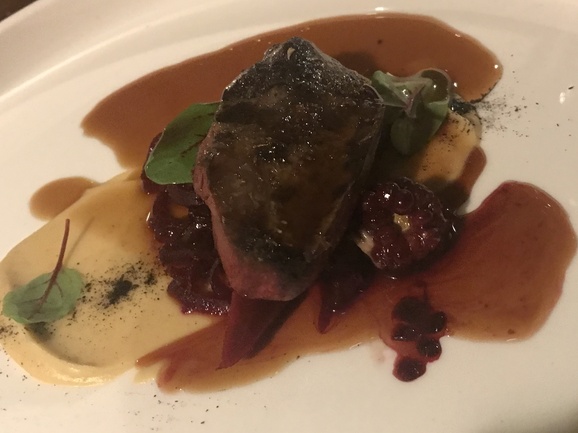 So our first course partridge hailed from the Underley Estate in the Lune Valley. Luke’s truffle gnocchi and local Crook Blue cheese with Pommery  mustard in the sauce were a powerful accompaniment to the bird’s quite delicate breast. What happened to the gamier legs? “I’ve confited them for a future partridge dish,” Luke told us. The one from this dinner might go onto the a la carte.” 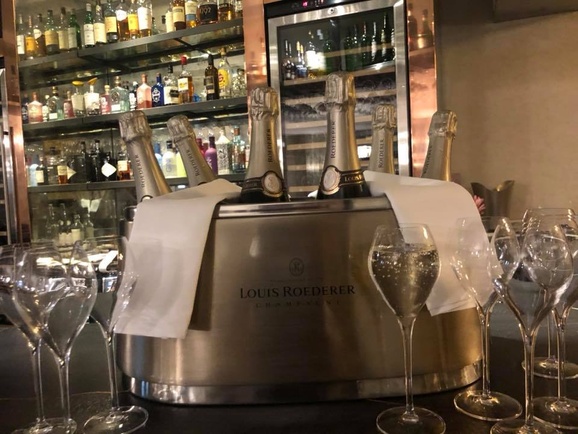 On the Game Menu canapes had been delicate pigeon leg bon-bons and mallard leg samosas, to accompany our Louis Roederer Brut Champagne, particular favourite of the hotel’s wine supplier and dinner host, Frank Stainton of the eponymous merchants in Keswick. 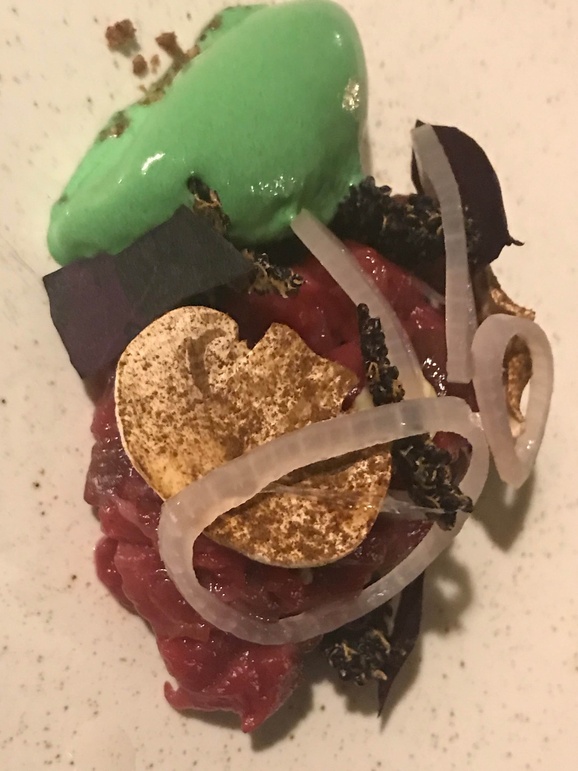 The venison for our tartare (above) was sourced from the Dalmaine Estate, pickled shallot and a hint of smoked mayonnaise giving it piquancy, quinoa crisps a delicate crunch, only a surprisingly over-sweet sorrel mayonnaise hampering the overall harmony. A minor quibble; a pattern of seriously interesting food was developing.

Pigeon breast came, classically with blackberry on a lick of salt-baked celeriac, while the sar of the show was a hunk of tender Himalayan salt-aged wild mallard with smoked salsify, cubes of purple potto and a pool of parsley emulsion that was all the sorrel ice cream wasn’t. 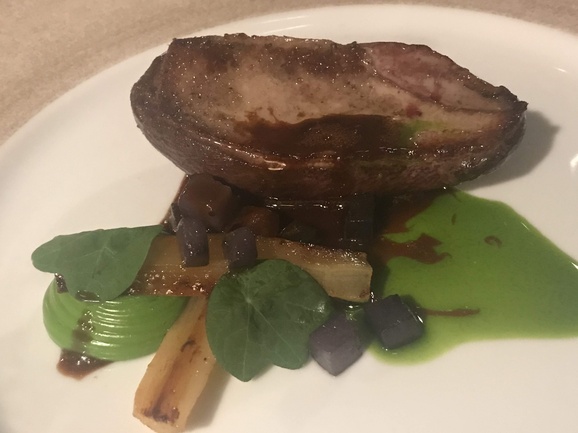 A superb glazed fig tart with almonds and apple sorbet followed. Holbeck boasts three AA rosettes; on this form a fourth is not out of the question. 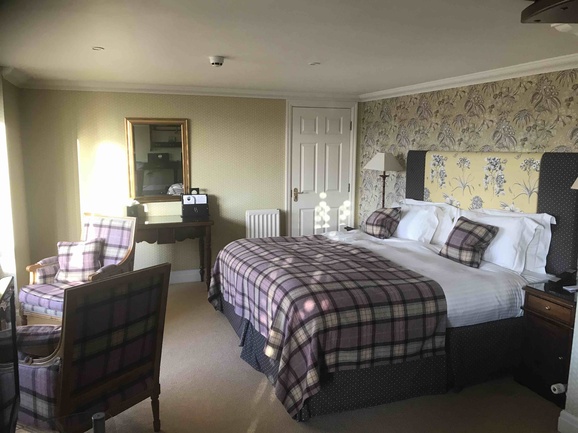 As for the hotel, which spreads out into various luxurious lodges and boltholes (our room , above) across the 18 acre estate, there can be few friendlier at this level. It was appropriate that the turreted main house, once major landowner Lord Lonsdale’s hunting lodge should host this Game Dinner.

With the panelled public rooms decked with Christmas decorations the whole hotel had  dreamlike quality. As did our chihuahua after wolfing his mallard doggie bag. 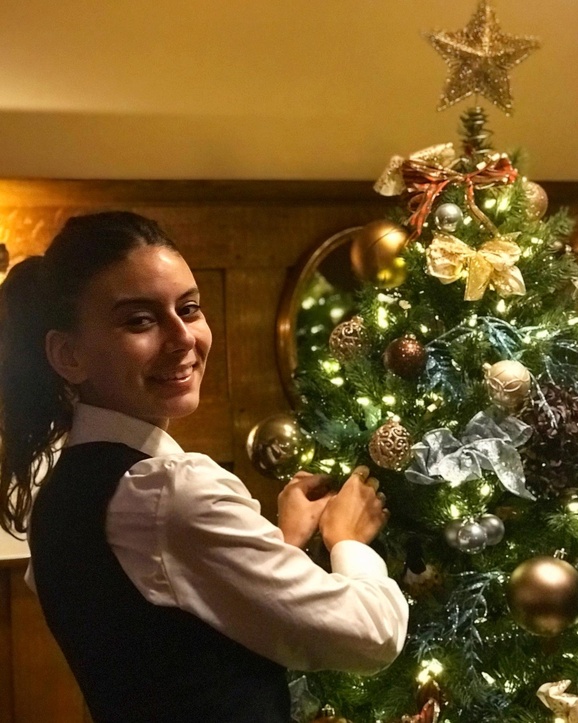 Holbeck Ghyll, Holbeck Lane, Windermere, LA23 1LU. Prices start from £150 per room per night based on two people sharing on a B&B basis  Join thei  their mailing list for news of special offers and regular seasonal dinners, like the Game Dinner with optional matching wine flights (on this evidence, highly recommended).

WHY YOU SHOULD EAT GAME

Tastewise it’s magnificent and versatile, as evidenced by Luke’s tasting menu. Plus, for the health conscious it’s also lean, high in protein and low in fat. Compared with chicken, game is far higher in protein and selenium and lower in calories.

To encourage you to tackle it at home, the BGA website offers a wealth of Eat Wild recipes – ranging from slow roasted pheasant ramen to southern fried partridge,

Wild game has a lower carbon footprint than most mass-produced supermarket meats, and the industry is essential to the management and maintenance of countryside environments.

British Game Alliance is a not-for-profit organisation working to promote feathered game as a healthier, more sustainable and ethical alternative to chicken and turkey. All BGA-assured game agrees to strict regulations covering aspects such as land management, the number of birds reared and released, and the use of medication.This means it’s guaranteed to be traceable, sustainable, ethical, and among the best on the market.