TWO dishes sum up the refreshed restaurant regime at the River Restaurant (if you’ll pardon the alliteration). The first a Cornish crab starter dreamed up one dawn in new head chef Dave Ashton’s home kitchen, the second ‘The Lowry Gin’, an intricate dessert bombe that deconstructs and reassembles a G and T to explosive flavour effect. Oh and talk about sustainability, the Cuckoo Gin involved features honey from the hotel’s rooftop hives. 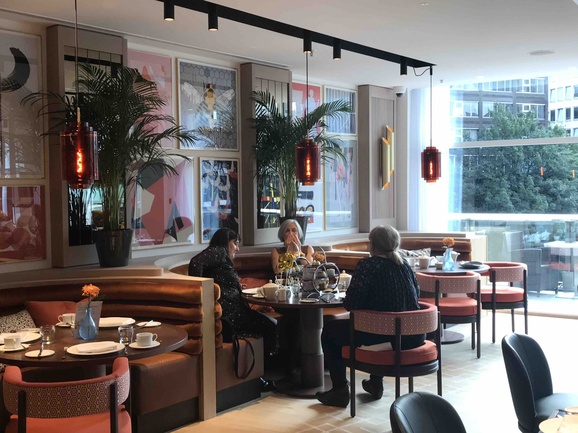 Already you are sensing that the food offering is refocusing. To match the expensive  revamp of an equally underperforming dining room and bar. About time. New arrivals in the city, Dakota and Native have brought a vigorous hotel food project with them and the Stock Exchange Hotel, hosting Tom Kerridge’s Bull & Bear is just a month away.

In the challenging circumstances of an MFDF hub pop-up Kerridge recently served up a potted Cornish crab dish with cucumber chutney and smoked paprika butter that was hugely impressive. 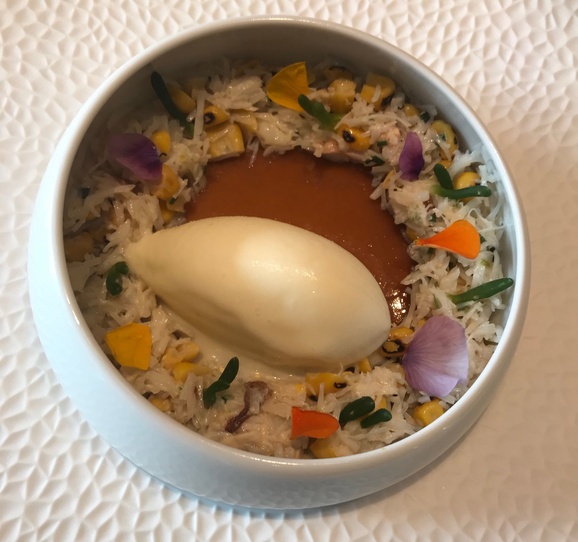 Dave Ashton’s personal piece of crustacean finesse tops even that. “I was half-awake mulling over some recipe ideas and it struck me that a horseradish sorbet and brown crab meat would match beautifully,” Dave told us at the end of a recent preview lunch.

“And it did, just a few sea herbs and sweetcorn completing the dish. Of course, it’s only as good as the quality of the fresh crab and I’m lucky here at The Lowry that I can source from wherever I want – I’m not tied down to existing suppliers. If I find, say crab from Margate that’s better than these couriered up from Cornwall, then I can go for it.”

There’s not the same road or air miles involved with the essential component of the Lowry House Gin commissioned from Cuckoo Gin, whose indie distillery is in the Lancashire village of Brindle. Trust us, based on a canny quiver of sustainable botanicals, it makes a sharp G&T. 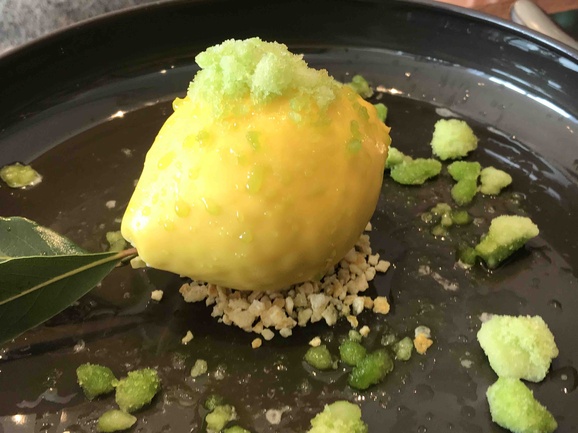 Chef Ashton’s colourful dessert homage is something else. On the plate it resembles a whole lemon. It is in fact various layerings of lemon and Lowry Gin mousse, tonic gel and candied lemon peel, the whole encased in white chocolate sprayed with gold powder (for just £9 a shot). Cucumber ice made with liquid nitrogen completes th ensemble.

The bees also get in on the action more obviously in a rival pud combining heather honey cake, honeycomb panna cotta, fennel and honey iced parfait and bee pollen (£8). Dave and his team have to prise their tithe of honey from the ethical bee keepers they deal with, whose concern is more the little fellers’ survival rather than the end product. “They feed some of the honey made back to the bees,” he tells us. 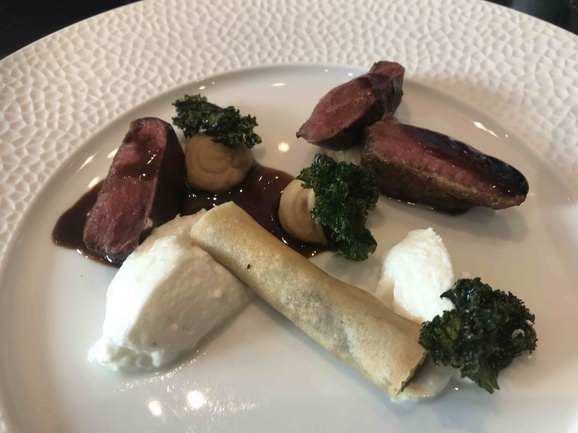 Our other starter at £12 is squab pigeon, with a crispy pastilla (leg meat in the crisp pastry?) with celeriac, kale plus a goat’s curd I can’t quite see the point of. Does the Lowry now boast its own resident Anglo-Nubians? 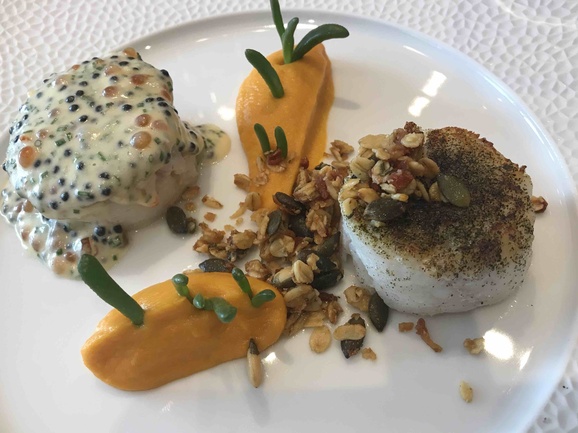 Seaweed cured cod (£20) is a slighty fussy, slightly sweet dish with creme fraiche and caviar sauce squash puree and sea vegetables, that eventually convinces (well maybe not the creme fraiche). Good to see some leftfield thinking going  on menuwise. Whether the employment of the hydrolised starch maltodextrin to add savouriness to a rump of Cheshire Farm Lamb (£25) is merely modishness or really enhances a lovely raw material I’m not quite sure. Ditto lamb fat carrot – they’re everywhere at the moment. Still mint sauce upholds the traditional virtues. 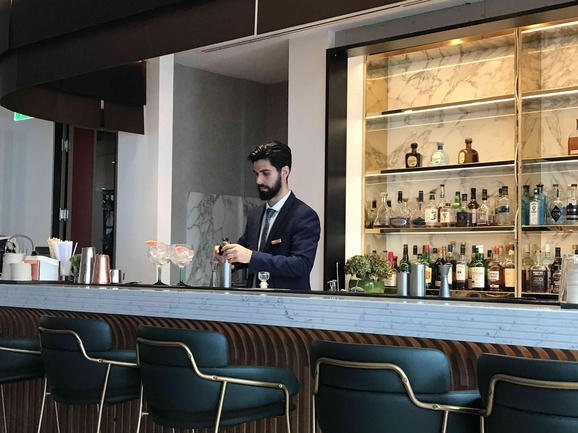 There are serious changes to the decor in both the dining room and the bar lounge and the marble bar itself is in a different, more logical position, making it much more attractive to perch at. The entire floor is much more welcoming. We can forgive the publicity guff that proclaims “The inspiration… was taken from the multifaceted city itself. Geometric influences come from the very recognisable bridge over the River Irwell, while the playful, soft-hued colour pallet (or even palette?) comes from the vibrant musical heritage elements.”

Apparently they've also introduced metal elements in a homage to the industrial past. Missed those but liked the cluttered artworks. In what was a soft launch service was somewhat distracted; we hope someone pays attention to the newly introduced plants that were already withering. Small quibbles. It’s good to see The Lowry fighting its corner – to the tune of £5m – and there’s certainly some excitement in the kitchens again. 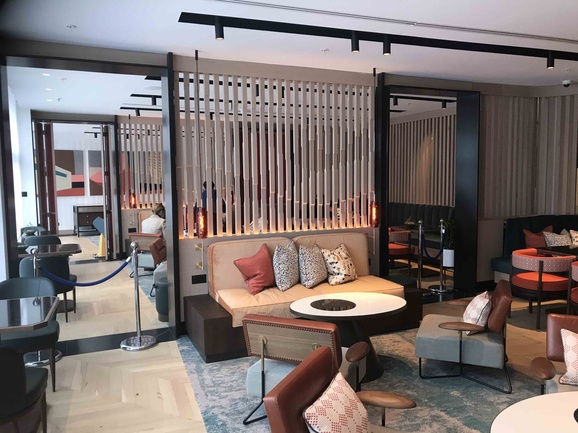 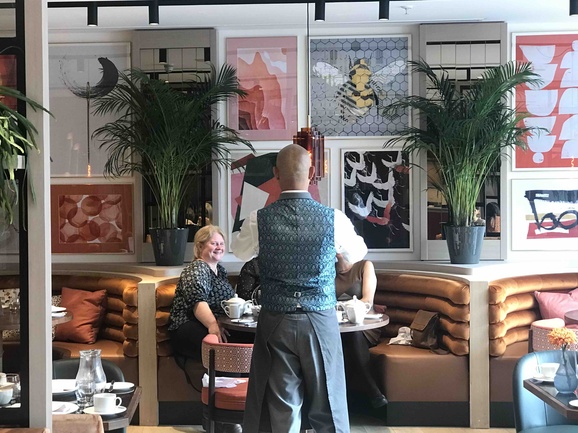 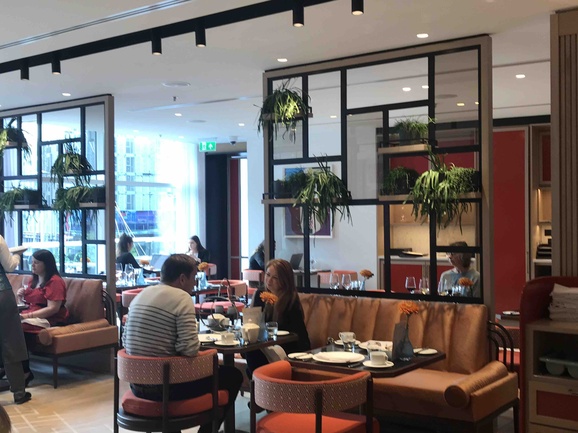