Runyon’s at the new Hotel Brooklyn – worth making a song and dance about?

HOW odd to discover Hotel Brooklyn’s digital assistant combines my name with the Guys and Dolls character Nicely Nicely Johnson. The one who who rattled out: ‘Sit down you’re rocking the boat’, the one who wasn’t played by Frank Sinatra or Marlon Brando.

Clicking into the new Portland Street hotel’s website, I was greeted by one ‘Nicely Nicely Neil’ (below) offering his assistance. Thanks, bud, but just checking out how different the all-day menu we encountered at lunchtime is from the a la carte. 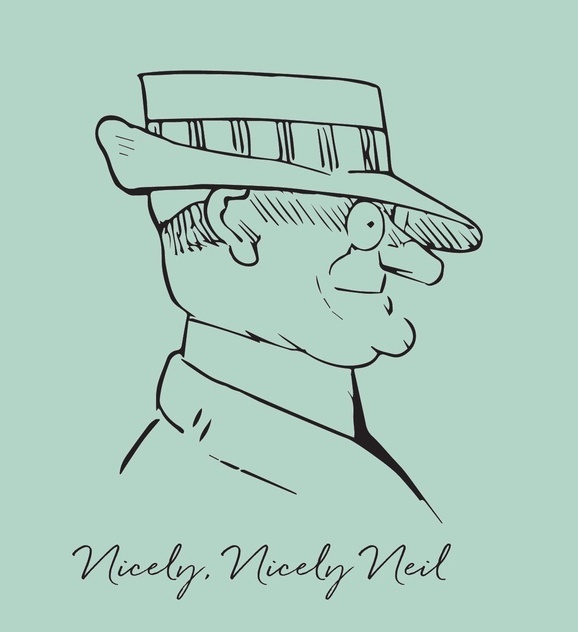 Not much, as it happens, but the food and service three days after HB’s launch dispelled any fears of being mugged by yet another Big Apple-aping hospitality concept. 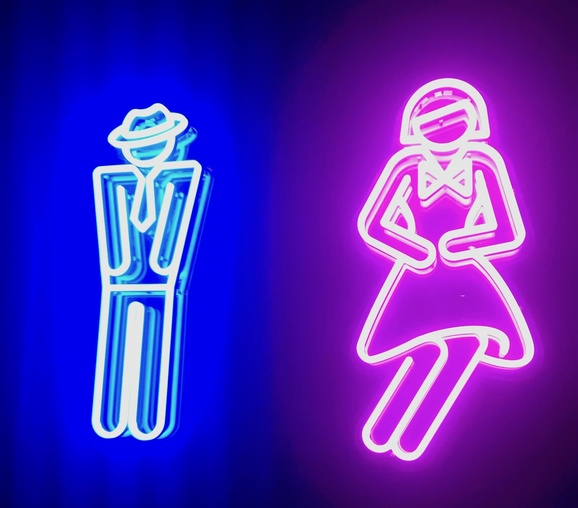 I’m not sure if that was Guys and Dolls dialogue they were pumping into the loos at Runyon’s, their restaurant named after Damon Runyon, creator of the ‘New Yoik’ tales that inspired that benchmark musical. Still from stagey staff costumes to signature dishes there was definitely a transatlantic homage going on.

That extended to the mural of Brooklyn Bridge spanning the casual dining room. Great for Intsagramming our chihuahua Captain Smidge. Brooklyn Smidge anyone? Sounds like a Runyon character. 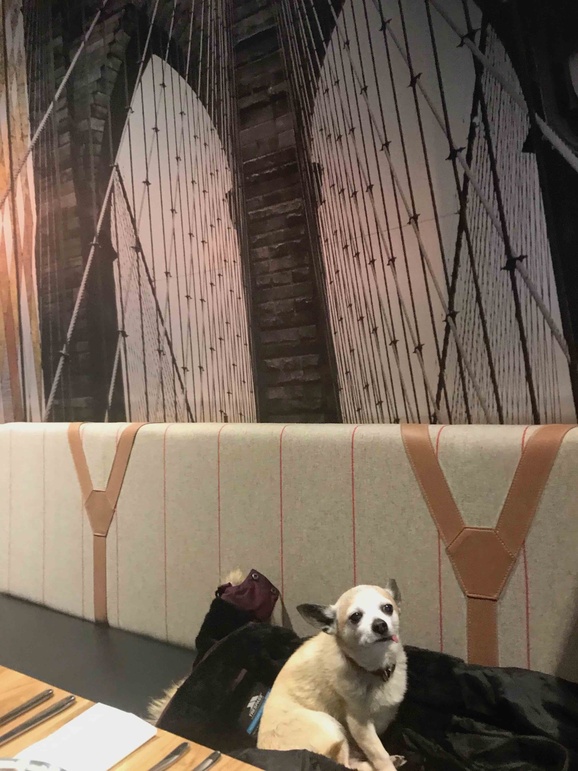 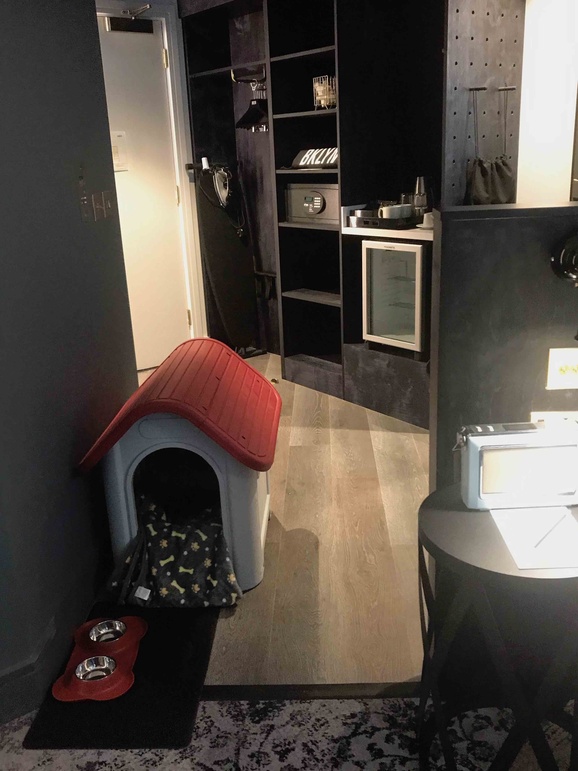 The 189-room hotel is indeed dog-friendly from ‘furry kennel’ beds in selected rooms to the foyer’s fake pooches Olly and Woody scrapping over a hot dog (the edible variety in a bun). Check, though, if it is continuing policy to accept small, well-behaved dogs into Runyon’s. 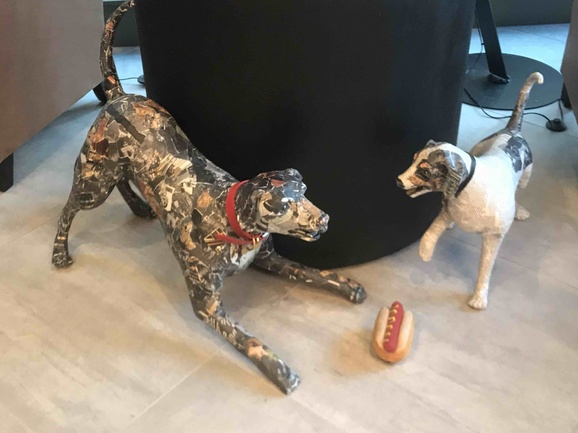 A new build on the site of a former car park, this boutique sibling of Hotel Gotham offers a very different. more democratic vibe. Not just mega smiles but an attention to detail.

It may be the presence of experienced manager Paul Bayliss – MBE and UK Independent Hotelier of the Year 2018 – whose hawk eye doesn’t miss a trick as he shows us round. He is nattily suited, too, as if in character. It’s infectious. 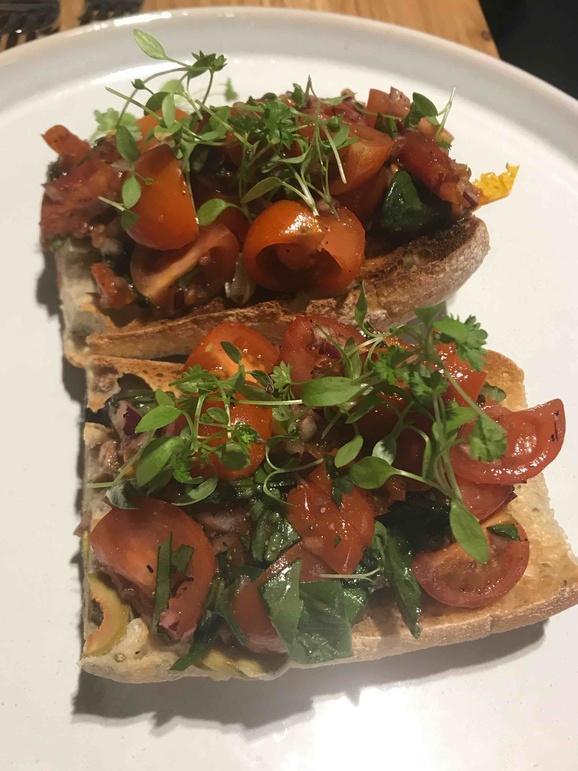 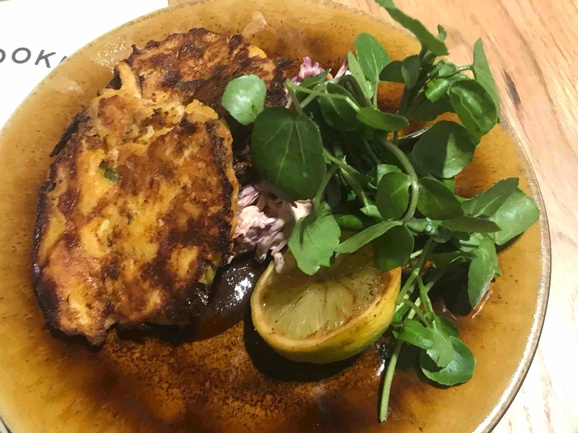 But what of the food, ToM’s prime focus? A quirky American meets Manc mix from chicken and waffle starters or huevos rancheros to a trifle made with Vimto jelly and shortcake crumble. We couldn’t visit  New York without tackling steaks, but first the flatbread special of the day with an intense topping of fresh and sun-dried tomatoes, perhaps with too many green olives in there. Then cauliflower and corn bread fritters with ranch slaw and real BBQ sauce (£7). The delicate slaw was made in-house as were the exquisite pickles that later accompanied our steaks. 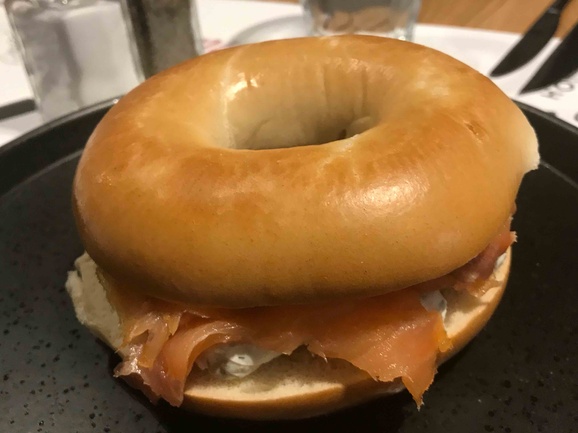 The oak-smoked salmon for our essential bagel interlude (£9) had been cut thickly from a whole side giving real substance, with piquancy from capers, scallions and dill among the cream cheese.

For mains we compare two 8oz cuts – the filet mignon (£29) and the New York strip (£27). The latter’s association with the US city can be traced back to its high profile at Delmonico’s, which opened as Manhattan’s first fine dining restaurant back in 1837. Hotel Brooklyn’s steaks are sourced from our own West Country – branded Casterbridge for the Thomas Hardy associations. Jason Atherton is apparently a fan of this grain-fed, dry-aged stuff. 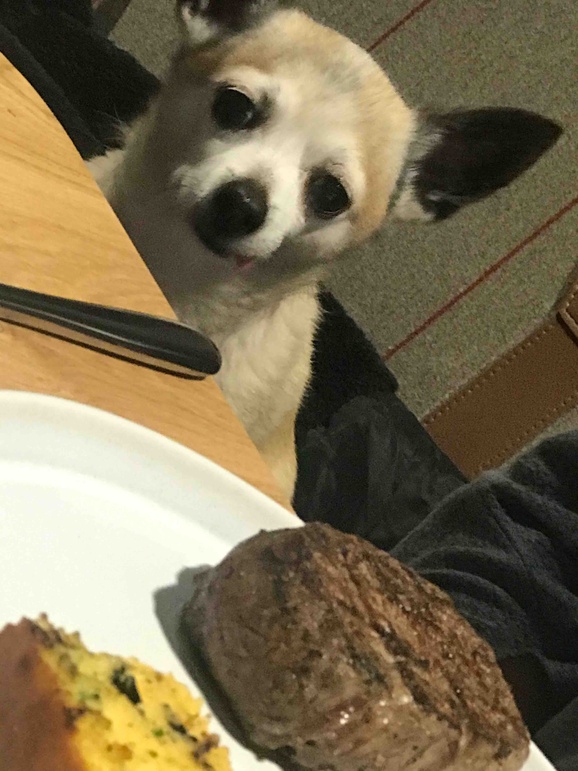 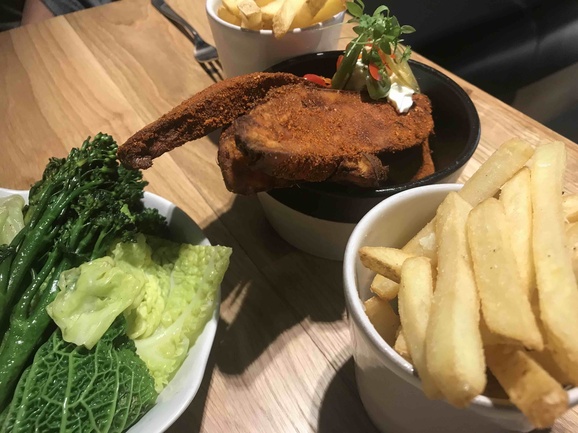 We order both rare and on their arrival Brooklyn Smidge reveals a connoisseur’s interest. The meat is sweet and tender; perhaps with chimichurri, pickles, grilled polenta and a punnet of fries each we needn’t have ordered sides of collard spring greens in spiced butter and sweet potato wedges, the latter given a cajun spice coating the equivalent of a Deontay Wilder knock-out blow. 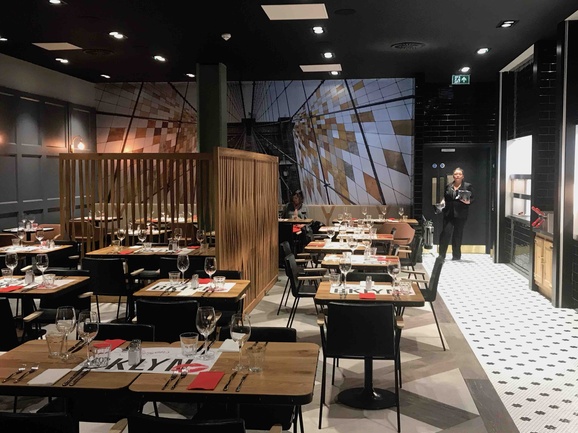 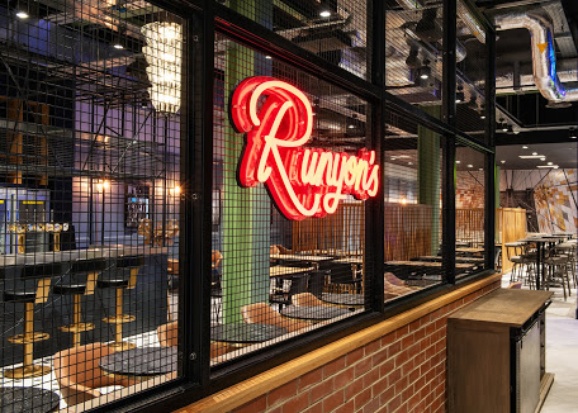 The draught beer in the adjoining bar is corporate and dull but alongside Brooklyn among the cans you’ll find Flying Dog craft from Maryland. Alas, none had been stocked in the chiller yet, so we settled for wine from a compact but well chosen list.

In a quirky nod, not to the 1920s when Runyon bestrode the brownstones of Brooklyn but to currently cutting edge Williamsburg, they stock a (Bordeaux) Merlot called Les Hipster Barbe with an appropriately full-bearded label.

As a wine list nod to New York state’s own vigorous vigneron culture Hotel Brooklyn stocks a Riesling  and a Cabernet Franc from Finger Lakes pioneer Dr Konstantin Frank. The red (£17.95 a 250cl glass, £50 a bottle) went beautifully with those succulent steaks. Some toasty oak spice and soft earthiness with vivid cherryish fruit. 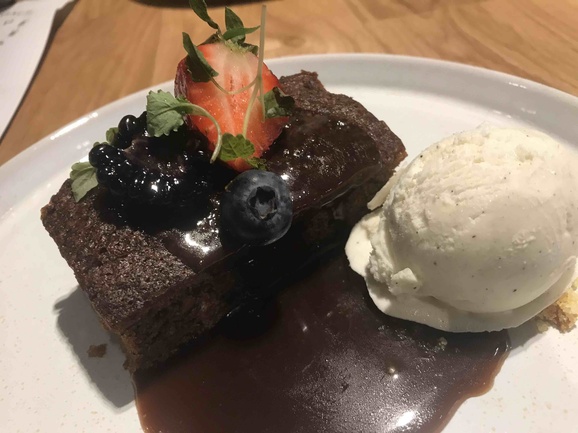 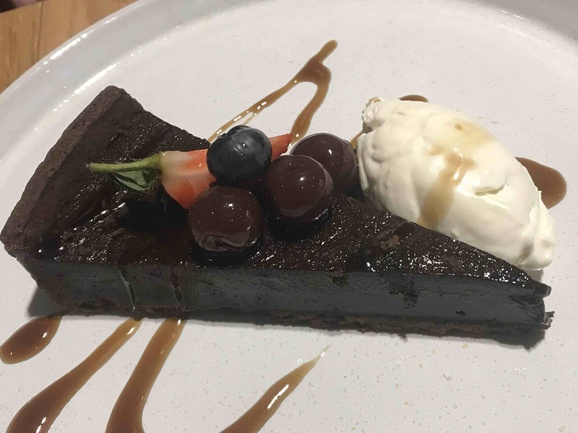 Somehow we also managed a sticky toffee pudding and chocolate tart. After which we could happily have had an afternoon nap in one of the hotel’s 189 bedrooms inspired by Brooklyn’s loft spaces. 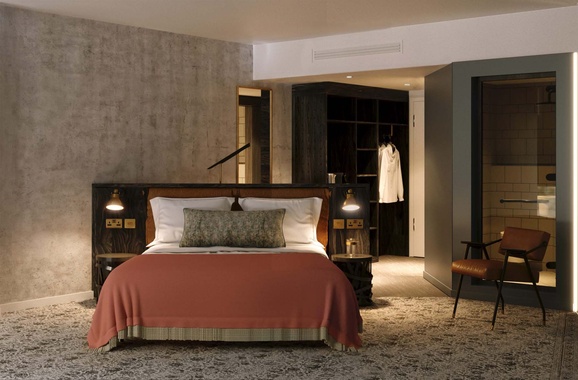 These come in a variety of fit-outs with 18 fully accessible, probably a record for Manchester. Charm and sustainability rub shoulders; amenities include organic bamboo toothbrushes and ethically sourced toothpaste, green soap and lotion dispensers with minimum waste. Nightly rates start from £130 for a Club Room on a B&B basis.