ME, meat and Tom Kerridge. It’s a marriage made in Marlow and consummated in Manchester. If the highlight of a trip to that boating town on the Thames was lunch at his flagship 2 Michelin star pub, The Hand and Flowers, I was smitten too with a less high profile outpost of his culinary empire there – The Butcher’s Tap.

I came away from this unique pub/butcher’s shop combo with a kilo of veal sweetbreads and memories of a stacked cabinet, a carnivore’s wet dream). Sunday lunching at Kerridge’s Manchester restaurant, The Bull and Bear, it was a sudden flashback as I tucked into top rump of Dovecote beef. 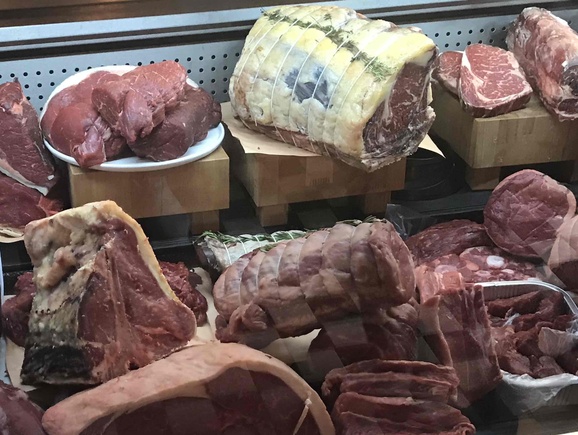 Confession here: the Sunday Roast, like the Full English, isn’t high on my culinary bucket list, while soul music has rarely been the soundtrack to my life. So accepting an invitation to live music-meets-roast Soul Sunday at the B&B, inside the Stock Exchange Hotel, all hinged on the Kerridge Factor.

Blot out all his telly diet evangelising of late and recall the makeshift feast with which the man signed off MFDF 2019, in the Cathedral Gardens Dining Dome marquee. The centrepiece was fillet of Stokes Farm beef with brisket-stuffed Yorkshire pud with horseradish cream, followed by beef suet sticky toffee pudding. 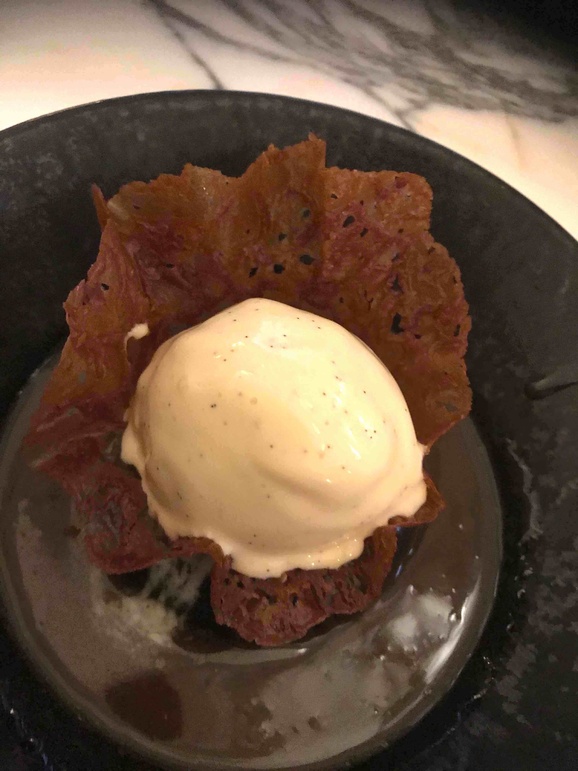 Sticky toffee (yes!) was on the dessert list of the Bull and Bear Sunday Lunch menu (two courses for £34.50, three for £39 accessible via a QR code). The beef this time was sourced from Yorkshire’s Dovecote Farm and rotisserie seared – three medium rare slices, accompanied by a thankfully manageable Yorkshire pudding, a slick of swede mash, greens, roasties, rich gravy and a further dose of gloriously nasal-clearing horseradish cream. A delicate, balanced ensemble, it banished all those carvery bad dreams of yore. 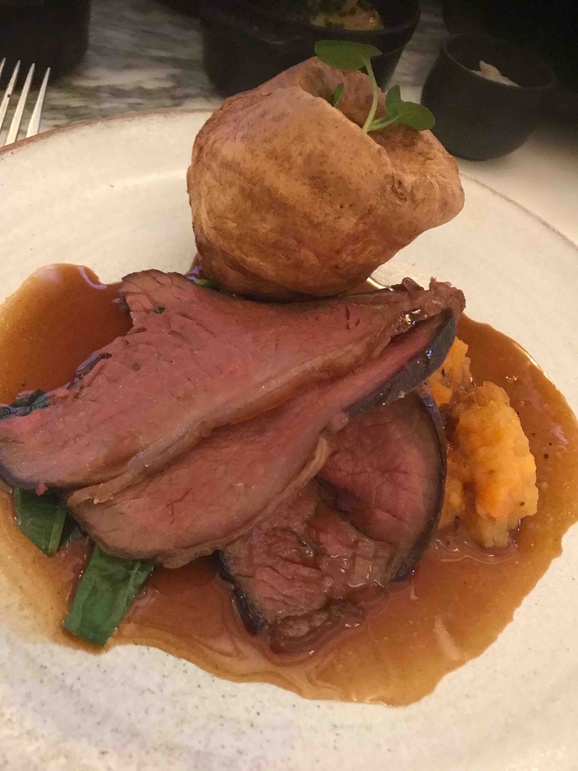 And the mellow sounds of ‘Superstition’ and ‘Dock of the Bay’ from a very discreet trio was a world away from Wigan Casino’s pimply Northern Soul. Indeed such was the quality of food and service (thanks for pressing those glasses of bubbly in our hands as we took our socially distanced seats) we hardly took in the musical backdrop.

Fish Scotch eggs are a Kerridge fave. At The Coach – his pubbier Marlow gastro haunt whose menu is the model for Manchester – he makes one out of Cornish pollock, rather than sausage meat, and serves it in a shellfish bisque. Here it’s a more powerful, almost Iberian take, with a salt cod casing for the egg, in a pool of sweet red pepper purée and topped with a disc of piquant chorizo. Different but equally good.. 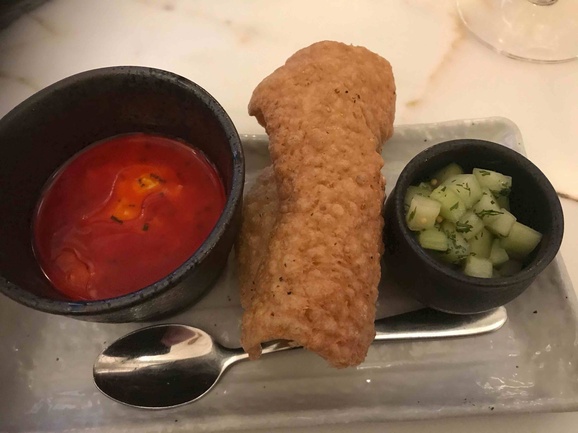 That was across a table, now supplied with two glasses of a Domaine Jean Baptiste Ponsot Rully, nutty, toasty white Burgundy. That was a sumptuous match for my starter of potted Cornish crab with smoked paprika butter and cucumber chutney with a ruffle of tuile to mop it up.

The beef comes at a £4.50 supplement, which is a mite cheeky at these already premium prices. Alternatives are roast pork belly, monkfish, braised lamb… and for veggies, a magical TK signature dish, named after a chef hero of his, Mushroom Risotto Claude Bosi. 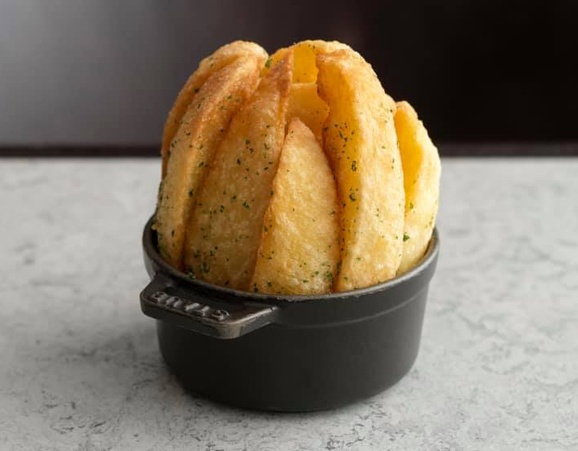 The Hand and Flowers boasts a deliriously moreish wine list and some of that joie de boire rubs off here. At £11 a glass the Greek red ‘Hedgehog Vineyard Xinomavro’ is a bargain, with seven years’ bottle age tempering the grape’s often harsh tannins. With a roast its slinky black pepper-tinged blackberry fruit is preferable to many a one-dimensional Malbec.

We over-did it on sides for the mains. Truffle mash and cauliflower cheese were as oozily spot as they were irresistible. Fat chips should have been redundant but they allowed me to introduce to my lunch companion a key Kerridge tracklement – his gherkin ketchup.

Soon after she succumbed to pud envy. Much to delight her in the buttermilk panna cotta with blackcurrant compote and crispy meringue straws (all that vitamin C) but it paled beside my sticky, suety toffee pudding with a blob of proper vanilla ice cream. 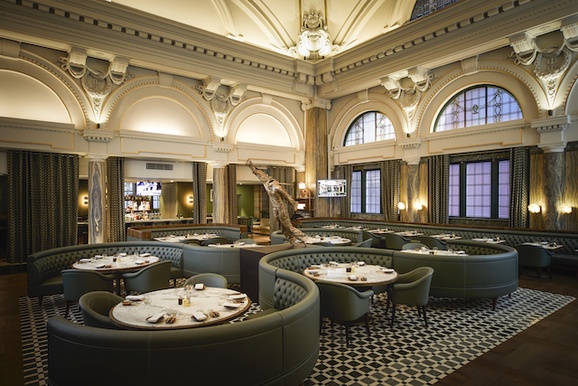 The domed surroundings, previously the trading floor of the old Stock Exchange, were equally gob-smacking in these difficult times. Celebrity chef Tom talked the talk when he took the plunge up north, invited by hotel owner Gary Neville. He promised us ‘refined British classic comfort food’. An eventful year on, The Bull and Bear is still delivering that. With added soul on Sundays.