SOME figures stick in your head. Last year Jus-Rol, creators of British Pie Week – the latest edition of which takes place between March 2 and 8 – released research asserting that the average Brit consumes a whopping 2,160 pies over their adult lifetime. Which seems bizarrely in synch with World Obesity Day, which falls on March 4.

The poll also identified the nation’s favourite pie as the classic beef and ale. That was my choice at the first birthday party of Manchester Union Lager. Neil Broomfield and his Great North Pie team were doing the catering. We could have had cheese or vegan pie but the gravy aroma seeping through a suet shell settled the issue. 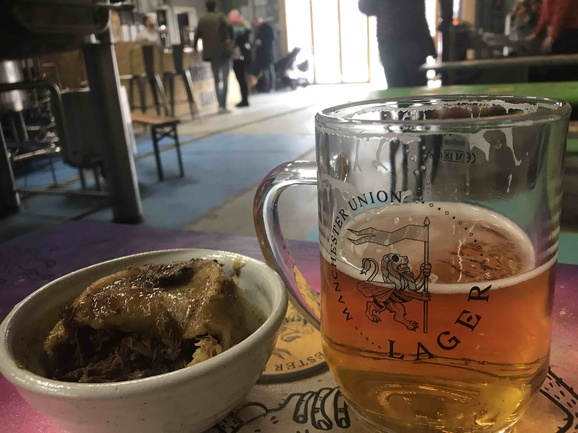 This was a relatively modest pie fix, but Great North, in their role as suppliers to Mamucium next to Victoria Station, are fuelling the ultimate Pie Week fest with a pie board to share that lasts all March. For £50 you get all four pies on the current roster plus all the sides and unlimited gravy. Or if you don’t pie hunt in packs chef Andrew Green’s excellent restaurant inside Hotel Indigo will do you one pie, a side and gravy for £12.50 or for £15 with an extra side. 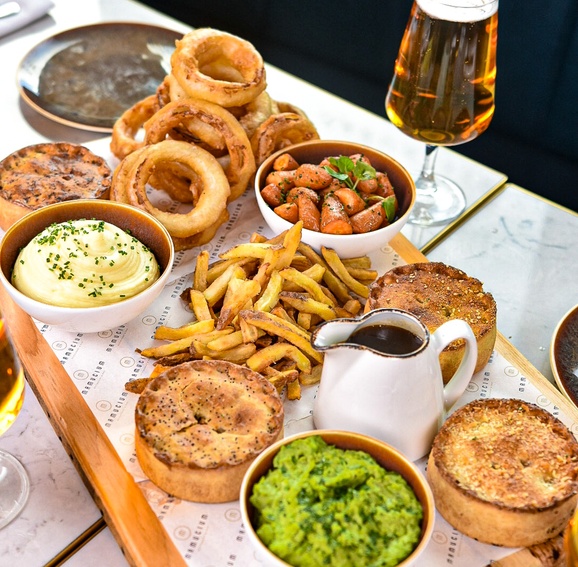 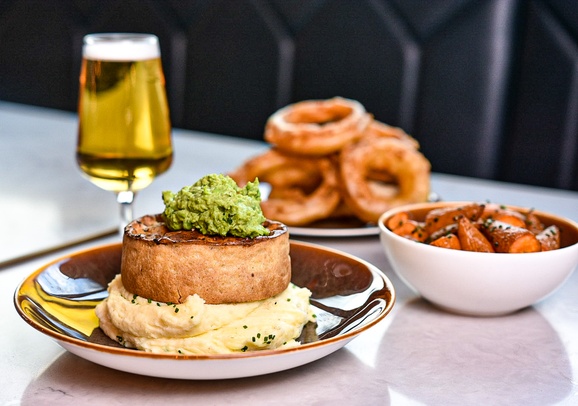 You’ll invariably find a Great North pie on the menu at Store Street Exchange’s craft bar menu. For the full range and specials check out their Altrincham Market outlet and stalls on various Cheshire markets, while come spring their cafe in faraway Ambleside will reopen.

Former policeman Neil made an arresting start to his change of career by winning five categories of the British Pie Awards as well as the title of North West Fine Food Producer of the Year. 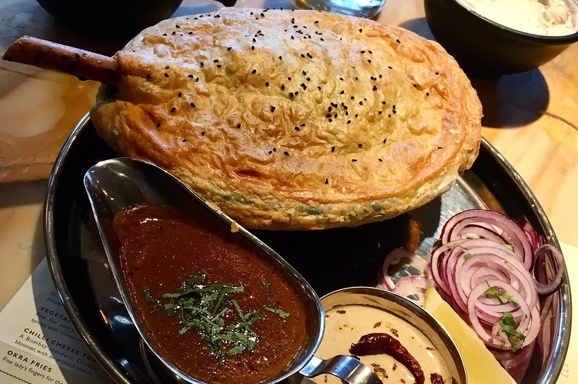 A key question as we prepare to celebrate British Pie Week is what constitutes a pie? Does The Lowry Hotel’s (or Mamucium’s Beef Wellington) count, say? Pastry is involved, thought it encases what is essentially a roast. Or, more leftfield, Dishoom’s Nalli Nihari Biryani. It is a classic Indian rice dish, where a tender lamb shank is layered with rice and caramelised onions, then enriched further with chicken liver gravy. Does the pastry blanket it is eventually baked under make it a pie? 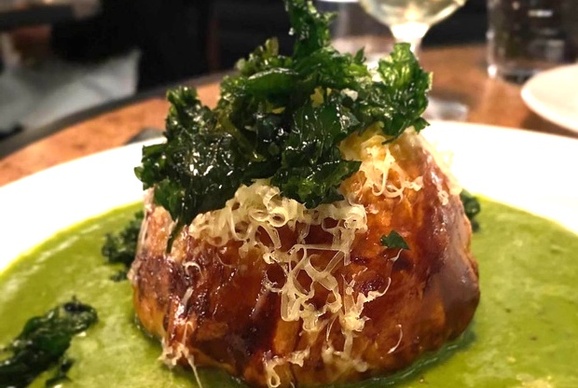 Cow pie was the chosen victual of one comic book hero. Guardian food critic Grace Dent, in her review of Bistrotheque at CULTUREPLEX’s sturdy potato and Comté cheese pithivier in green sauce (£17), wrote: “Desperate Dan could not have finished this”, referencing The Dandy legend. It is comfort food par excellence and don’t we need such in these desperate diluvian times? 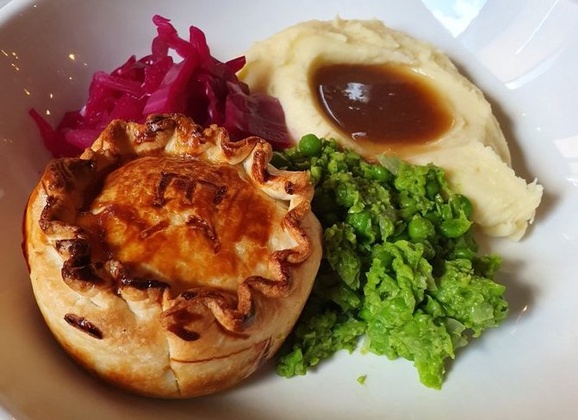 Pithivier features on the bar menu of exciting new Ancoats pub arrival, The Edinburgh Castle. Their version of this classic French tart showcases ewe's cheddar, spinach, smoked potato and onion. More our idea of a pie sits alongside it on the menu – beef, ale and Cheddar (above) for eleven quid, accompanied by pickled cabbage, peas and mash.

Finally, two local pie stalwarts plus a branch of an estimable national chain… 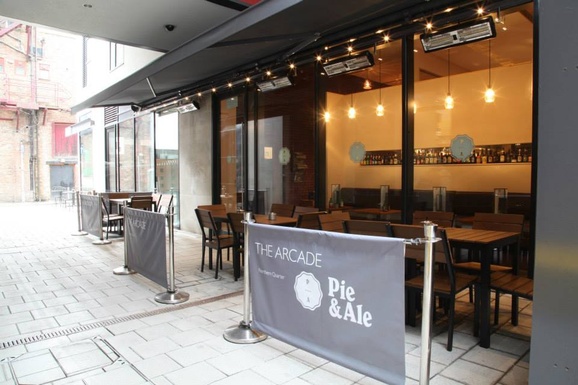 Pie and Ale in The Hive off Lever Street does what it says on the label, pairing some terrific beers with some innovative pie fillings. Our current recommendation? Wild Venison and Guinness, with black pudding in the filling and an accompanying Guinness, thyme and mustard sauce. 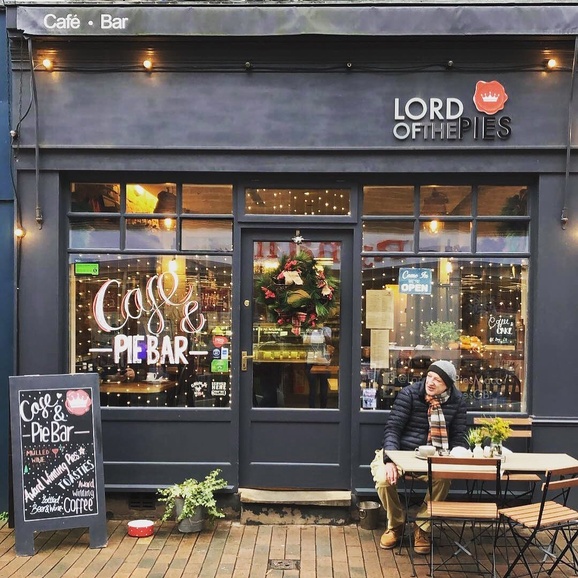 Lord of The Pies now has just the two outlets – the Stockport original and Macclesfield, whose signature dish is the Macc Pie, featuring ground beef stew, lyonnaise potatoes and Red Willow Smokeless Ale. 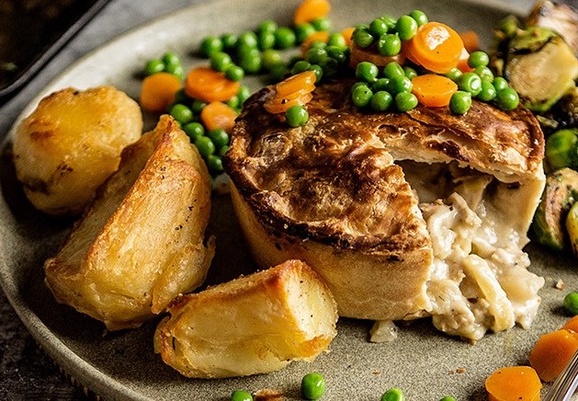 Pieminster, Northern QuarterYou can source this nationwide brand, HQ in Bristol, from branches of Pi Bar and elsewhere but Pieminster central is certainly their Northern Quarter outlet at 53 Church Street, where there’s a range of specials. Choose between two contrasting ‘chicken’  pies, each a fiver. Either ‘Chicken of Aragon’, featuring free range British chicken, dried cured bacon and tarragon.or ‘Chooks Away’ (above), a creamy vegan alternative with celeriac, smoked garlic and sherry. Each just a fiver, with gravy.