Who ate nearly all the pies? We did at Mamucium on your behalf

HOW many pies is it acceptable to scoff at one go before you start being labelled Desperate Dan (or desperate Danielle)? That was the debate before our ToM duo tackled the sharing board of posh pies at Mamucium as part of our celebration of British Pie Week.

We’re huge admirers of Andrew Green, head chef of the restaurant inside Hotel Indigo next to Victoria Station, but for our ‘Posh Pies’ lunch he played second fiddle. Thanks, Andrew, for some excellent beer-battered onion rings, carrots, triple-fried chips, mash, Lancashire caviar, aka mushy peas, and unlimited gravy (not that we tested its limits(, but the stars of the show were delivered by The Great North Pie Co.

We shared three of these upper crust beauties, just scorning reluctantly their 14 hour braised Swaledale grass-fed beef pie. Only because the same filling only under a suet topping had turned up at the recent first birthday party for Manchester Union Lager. It was divine. 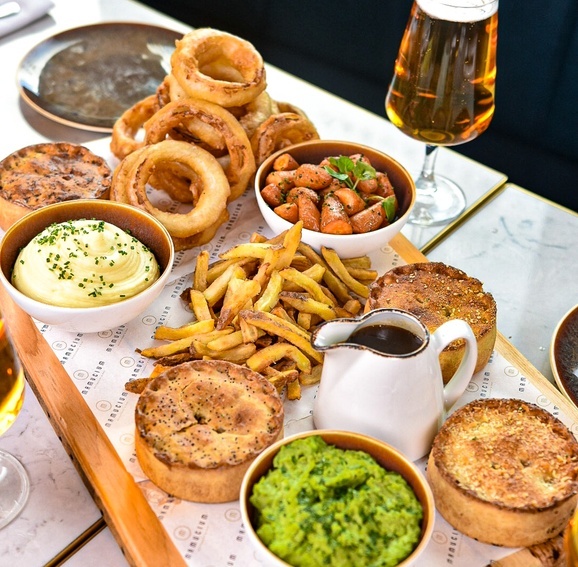 Mamucium are offering all four pies (above) on Great North Pie’s current roster until the end of March. You can purchase individually for £12.50 (or £15 with an extra side or as part of a £50 blow-out platter with all the trimmings.

Our verdict? ‘Dan’ went for the chicken and ‘Danielle’ for the cheese. Not that the sweet potato was in any way inferior. Great North founder Neil Broomfield produces consistently great pies from his Handforth base.

Former policeman Neil made an arresting start to his change of career by winning five categories of the British Pie Awards as well as the title of North West Fine Food Producer of the Year. For the full range and specials check out their Altrincham Market outlet and stalls on various Cheshire markets, while their cafe in Ambleside will reopen for the season.