Wilderness – a breath of fresh Scandi air in the Northern Quarter

WE devoured some glorious Scandi-influenced small plates in a preview of Wilderness Bar + Kitchen, the Northern Quarter’s newest arrival (droolable over pictures below), but it was the folk running the place that fascinated us. 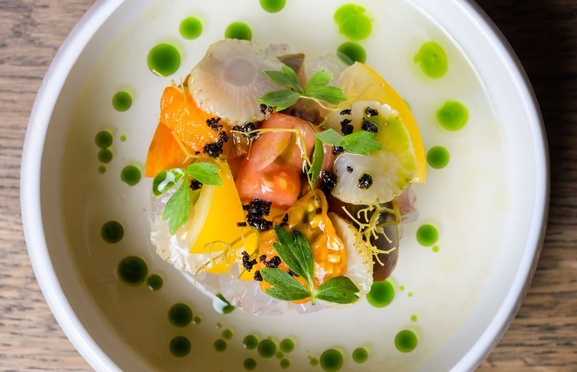 Take Bart Murphy, above, in the ‘interactive’ first floor cocktail bar, barriers down between bartender and customer,  that’s obviously his pride and joy. While we were pondering the health and safety issues of the decorative rowing boat dropping off the ceiling on a customer in mid-Negroni he was waxing lyrical about his rum punch recipe – we ordered a second – and the natural wine list he had created to  accompany chef James Lord’s food. 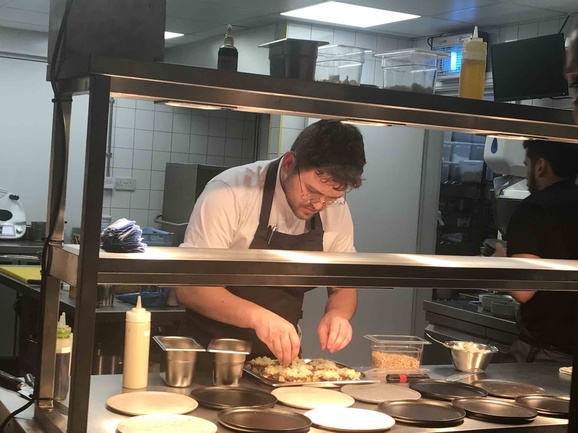 James served his time in the Manchester House kitchens, now he’s forging ahead with a menu obviously inspired by the Wilderness team’s recce around Copenhagen (how we wished it had been Reykjavik for the alliteration). 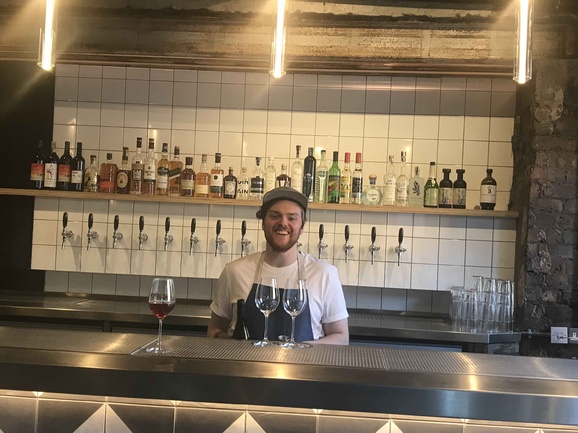 The cocktails themselves are in the immensely creative hands of Adam Day, formerly of El Gato Negro, Peggy’s and Wood & Co. His seasonally changing, ‘living, breathing, cocktail collections are called Aperture. Expect a ‘natural’ approach here with a roster of home-made ingredients and infusions.

That rum punch was made with a base of rooibos tea and infused with hibiscus, while our first taste of Wilderness was a ‘Kir’ using an in-house creme de cassis, of blackcurrant with violets. 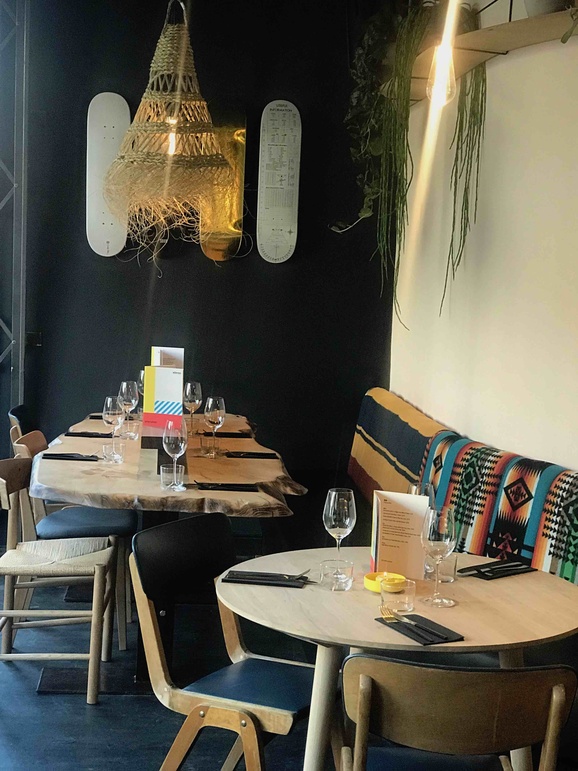 The punch came from one of 10 taps behind the downstairs bar – four for cocktail pours, the rest for beer, a couple of mainstream examples (Guinness and a lager) the rest offering the likes of Lervig, Omnipollo and a Cloudwater sour. 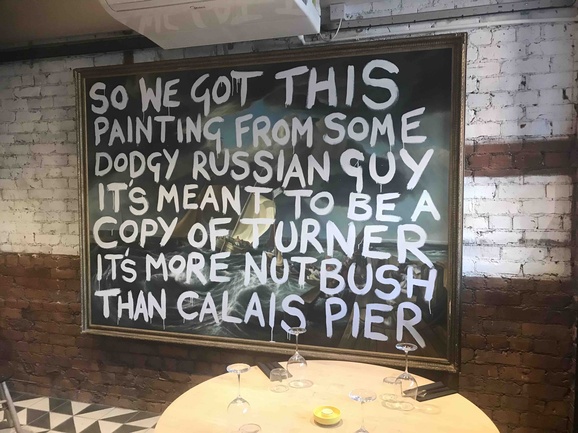 Here in the as upstairs the quirky artwork curated by Lyndon Higginson is very much in evidence. For 12 years this was NQ pioneer Odd bar then latterly the vegan experiment that was Folk & Soul. It’s unrecognisable from those – a charming mixture of in-your-face and sophisticated. 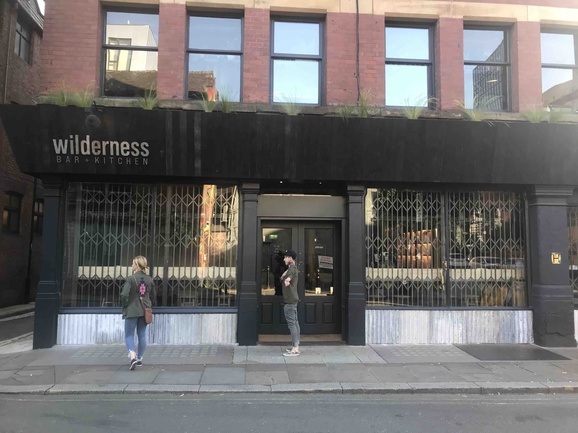 That might apply to the entire experienced team behind the project – Lyndon (Liars Group, Junkyard Gold Club and Bunny Jacksons) Mat Lake and Bart Murphy (Junkyard and Bunny) and Dan Morris (ex Trof Group and Cottonopolis), Add in musical direction from Mof Gimmers, resident record buyer at stablemate Wilderness Record Store, Withington and it’s quite a package for the Thursday, August 15 opening date. 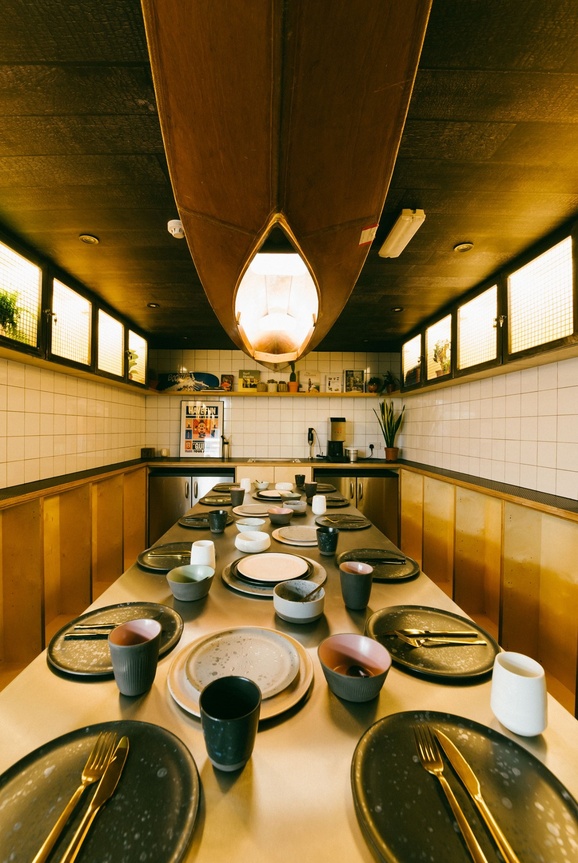 But back to that food, which we sampled in the basement Innovation Room. This is planned as will be a creative space for both the chefs and the bartenders to explore new flavours. The table is set within the working kitchen (with its emphasis on cooking over hot coals) and can also be booked out for private dining and tasting menus.

We sampled a selection small plates with appropriate wines, the bets of which was an orange wine, a rare Austrian Roter Veltliner. Particularly captivating were presed potato, smoked egg, brown crab and dill pollen that wouldn’t have seemed out of place on the Mana menu, and roast cauliflower, pumpkin seed butter and puffed buckwheat that was as tasty as it was playful. 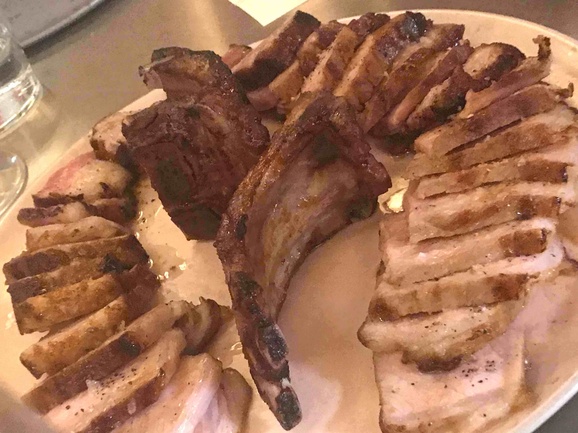 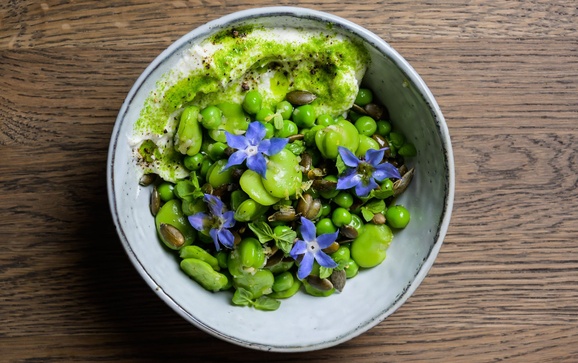 It’s named after St. Dunstan, a cleric, famed for defeating the Devil with a pair of tongs, later exiled to Belgium for upsetting the king. Foraged botanicals in the ale include lavender and juniper. Which fits the template of a bar/restaurant the like of which the Northern Quarter has never seen.

Who thought a trip into the Wilderness could turn out so devilishly thought-provoking? 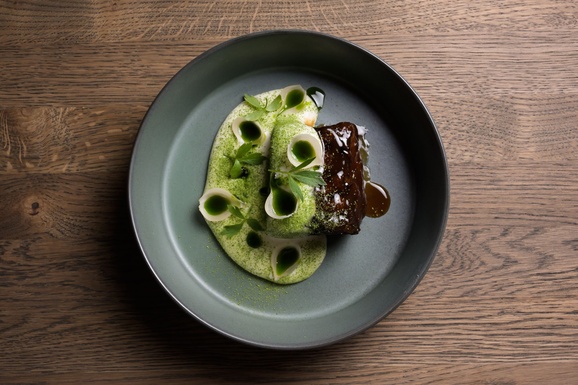 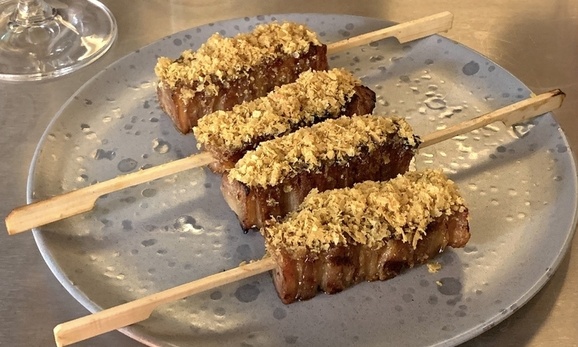