TO paraphrase Oscar Wilde: ‘to lose one bar may be regarded as a misfortune; to lose two looks like carelessness.’ Happily that’s not the case with the establishment formerly known as Wilderness Bar + Kitchen (two months), latterly as Wolf at The Door (three months).

It all looked a bit wobbly for a while when it shut up shop this week but then came reassurance from co-owner Lyndon Higginson that the Wolf is very much alive and kicking: “We are simply closing for two weeks to move a few things around inside and give the staff a post-December holiday. And we are changing the food concept.”

Later he posted on Facebook about the change of direction:

“We had a simple plan, to open a really cool neighbourhood bar with amazing drinks and brilliant food.amazing drinks and brilliant food. We somehow ended up with Michelin Star worthy food and spectacular award winning cocktails. We got a little too excited about the food, the drinks and the design and we just went with it. I really do believe we were knocking out some of the best food in our city and I’m eternally grateful to all of our staff who made this happen.

"The issue has always been that we never planned to open so much of a restaurant. So... We’re taking a couple of weeks to change our offer slightly and we’ll be back open before the end of the month with a new food offering and some more amazing drinks. We’re gonna have a big party and you’re all invited.” 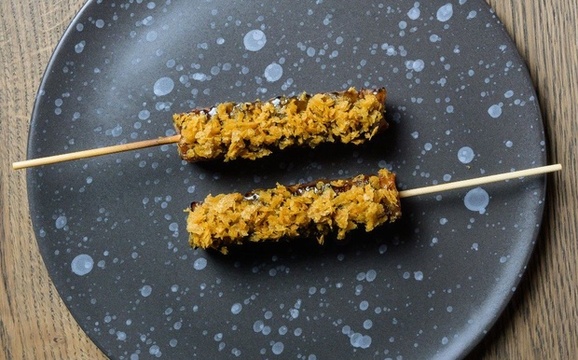 To what is the big question? Aiming at the hot wings challenge crowd like Bunny Jackson’s in First Street, which shares owners? Or maybe tacos? There's a gap in the NQ market after neighbours El Taquero went under this week. We hope not. We loved the Scandi-influenced small plates James Lord (ex Manchester House) has been putting out, but maybe that wasn’t commercially right for the Northern Quarter.

The October name change was in reaction to a Birmingham bar called Wilderness taking umbrage. Lyndon’s business partner Dan Morris pledged then: “The offering, design and ethos of our space will all remain the same and we will continue to look forward and do our best to make Wolf At The Door a really special place that we can be proud of”.

Before the paint had even dried it had already been shortlisted for ‘Avant Garde Cocktail Menu’ prize in the national Imbibe Drinks List of the Year awards. Much of that down to bar manager Adam Day. He left in December.

The first floor cocktail space had ambitiously been ‘designed to remove barriers between those making the drinks and those enjoying them’. Maybe that didn’t come across either.

When we called in recently that upstairs bar wasn't open. Possiby it would be better off as a standalone dining room, as is the case at The Edinburgh Castle in Ancoats. Let’s see what February brings. We pray they don’t ditch the natural wines and the decorative upturned canoes. On a personal note could they run to some draught excluders for the front doors?