Out of town review: Yakumama

WITH every street food operator there comes a time to settle down – blessedly under a roof and still trading. For Holy Crab, Wholesome Junkies and Blue Caribou Canteen that has recently meant neighbouring units in Manchester Arndale. Yakumama have gone down a different route, leasing the atmospheric old Co-op building in the Pennine border town of Todmorden courtesy of a crowdfunding campaign that raised nearly £18,000.

For a quarter of a century it was home to the Bear Wholefood Co-operative and latterly its upstairs veggie cafe (now gone). One remnant of those sandals and lentils day is a tenant’s obligation for Yak co-owners Marcelo Sandeval and Hannah Lovett to put a vegetarian spin on their South American small plate offering with an emphasis on plant-based. Which is a shame for this writer, a devotee of Marcie’s beef empanadas.

Ample compensation on a recent visit was some of the finest veggie food around, matched by a presentation that was never achieved in the pair’s peripatetic days, doling out their dishes in trays with wooden forks.

Not that this permanent version of Yakumama is remotely formal dining. Marcelo and Hannah (above) made the correct decision that a South American-influenced destination restaurant was unlikely to pay off even in a rapidly gentrifying Tod. Bar and Cantina is the label. They’re happy for you to bring in your dog, your children, sip a Pisco sour, organic Rioja, Steep Soda or draught beer from the likes of Pomona Island and Runaway and chill in a canteen-like space that has vestiges of its shop past with a raft of shelves still a decorative work in progress. The exterior with its blue and gold lettering is beyond improvement. 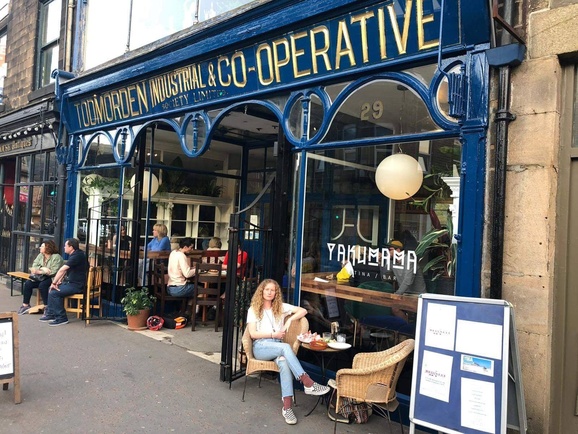 You’d be mad though to resist sampling the weekly changing menu of five small plates, all priced around £6 or £7, and a duo of dessert choices with padron peppers and olives as nibbles. 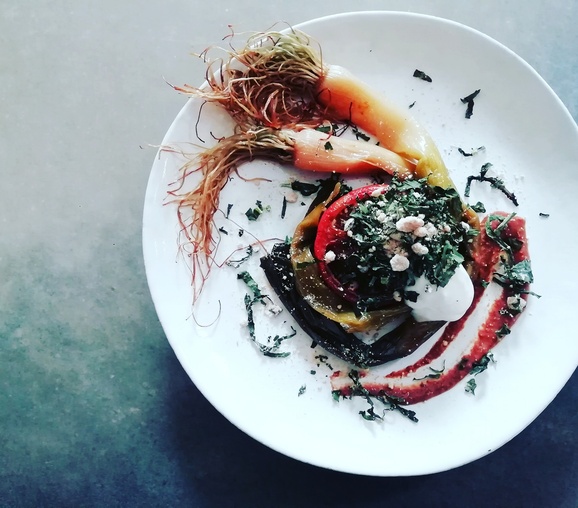 Earlier eating experiences here had been encouraging. We were sad this time not find on the menu the patacones (plantain fritters) or braised local stick garlic (above). Ample compensation came from the latest batch of dishes again rooted in fresh local veg and herbs, much sourced from the Incredible Farm project on the moors above town.

Result is nothing as grandiose as South American/Tyke fusion, just an instinctive interpretation of what works together from either context in a melting pot of global influences. Marcelo may be the son of Chilean emigres but he was raised less exotically in Leeds. This is food not locked in one tradition.

Our first dish, Miang Kham Mouli (£7), is actually rather exotic. A Thai snack. Four wafer-thin discs of mouli white radish are topped with mint, coconut and peanut. Fresh, crunchy and delicate. Guacomole too had been promised on the weekly Twitter Feed but maybe the avocados weren’t up to scratch. That’s definitely one raw material Tod doesn’t grow.

Plantain gnocchi (£7) up next, glorious sweet, starchy globules doused in brown butter and strewn with pecorino wisps. Too good to share really. 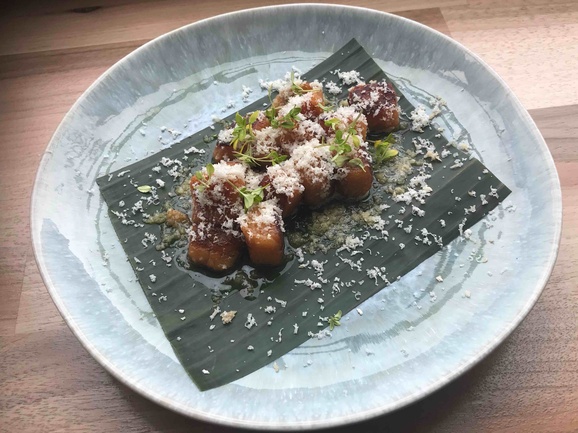 I’m quite addicted to Yakumama’s own proprietary mango and aji amarillo house sauce. They used to bottle it – the original Pollen bakery behind Piccadilly Station stocked it. In dish number three a spicy pool of it hosts a clutch of wontons, crisp packets of black beans and cheese.

By this time it is becoming quite a liberal approach to what constitutes South American food, but with a dish so packed with harmonious flavours as a charred courgette salad (£7.50 and definitely vegan) who cares? Dukkah, local pea shoots, asparagus tips and preserved lemons co-habiting on a pretty plate. 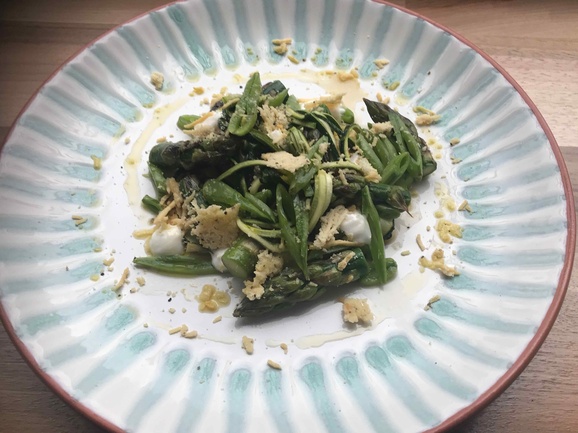 Yes it would have been our main image but that has to be colourful Yak stalwart Andean Potatoes, a world away from often dreary patatas bravas. A generous helping of fried potatoes is mixed with charred red peppers, coriander, soft-boiled egg and, of course, farofa.

Farofa? Just checked it out. A toasted cassava or corn flour mixture eaten mainly in Brazil. Well Yakumama, named after a monstrous, man-eating snake mother that lurks in the Peruvian Amazon, is a South American restaurant after all.