SO meat has taken back control after January 31 when Veganuary officially ended. Well, like that great political watershed things are never quite going to be the same again. Would that in the political climate more of us could be flexitarian. That doesn’t look imminent but in eating habits a majority of us are cooking plant-based more often. Or rather are locking into the supermarket chain’s convenience food take on it, which amounts to swapping one corrupted unhealthy diet for another, the cynic in us believes. 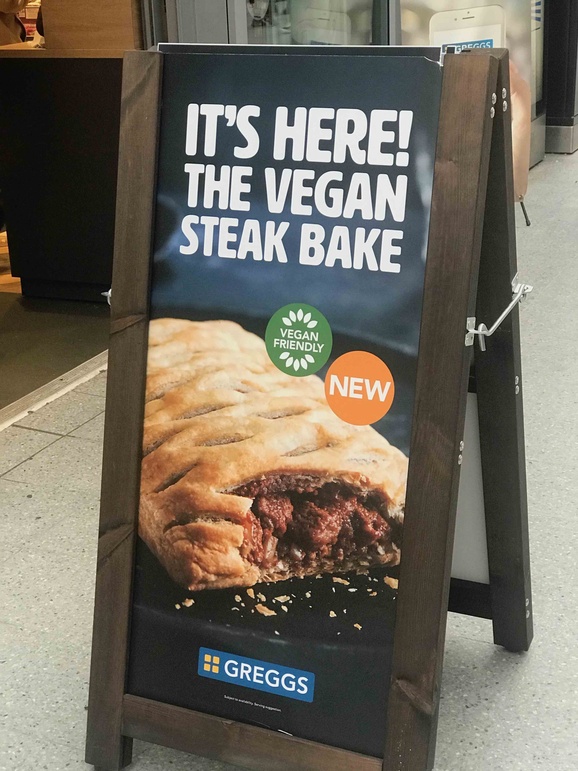 Which makes it all the more important that we cook from fresh ourselves or, when we eat out, we seek quality operations. En route to reassess Allotment I decided to go the populit route and picked up a Gregg Vegan Steak Bake – or meatlike stalwart Quorn cooked with onions and gravy encased in pallid pastry for £1.55. It’s been a long time since a high street steak and onion pie has made us pant with longing and this impostor replicated it passibly. Still it felt more like quick filler than treat. 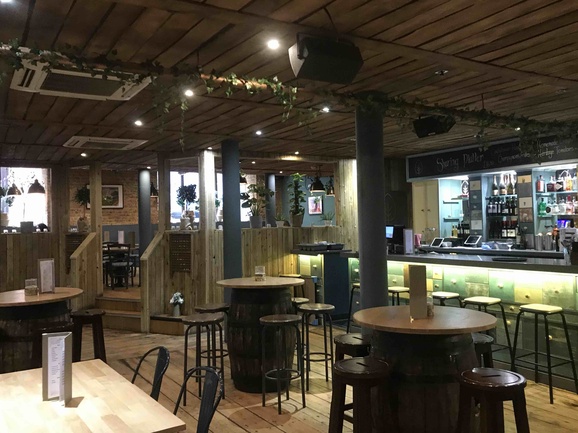 Treat was what Allotment felt like when we reviewed when it opened in Stockport back in 2017 when, hard to credit, veganism was still pretty niche. All this was down to it chef/patron Matthew Nutter, who might have been cooking without meat, dairy and eggs on ethical, wellness grounds but brought to it skills honed in quality orthodox kitchens plu a spontaneous creativity that earned him Chef of the Year at the 2017 Manchester Food and Drink Awards. Soon The Times newspaper lauded it as the UK’s best vegan restaurant and the less reliable Food Awards England voted it Best Vegetarian Restaurant 2019. 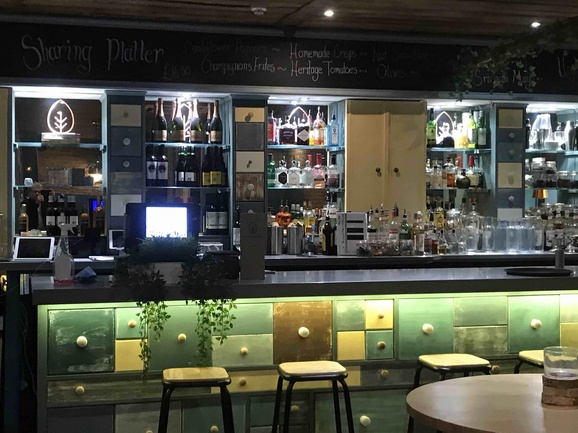 Hyperactive Matthew had made the leap into vegan tasting menus from a low-key start running his PlantFoodPowerChef pop-up in Wigan. In September 2018, with a backer, he swapped Stockport for the old Buca Di Pizza site and last year the

All this is charted on the current website. Matthew has long departed though his signature cauliflower wings remain on the menu (none of his vegan cheeses, which is a relief). His  talented successor Adam Leavy, a Masterchef: The Professionals semi-finalist, jumped ship last September to take the reins at NQ bar Alvarium and a few days ago Allotment’s Facebook page was again advertising for a new head chef. An odd time then to launch a new menu, albeit on that is decidedly more casual with takeaway options.

Still the ambition of the operation are obvious. At the end of March the team is guesting at Harvey Nichols for a special one-off dinner – the kind of crossover that shows plant has come of age. Which makes it such a shame to report that our lunch at Allotment was a bit of a curate’s egg (substitute). There were no culinary fireworks a la Nutter or Leavy; it felt like an exercise in playing safe. Roasted butternut squash (£6.50) felt most like a remnant of the old regime. There was a slight smokiness to the squash slices that married well with a swirl of garlic mayo dressing and spinach, coriander and pomegranate completing the Ottolenghi-ish assembly. There was a teasing amount of the Ts around – tofu and tamarind. Pan-fried tofu (£5.80), marinated in the souring paste and served sprinkled with sesame seed, was over-chewy and surprisingly salty. 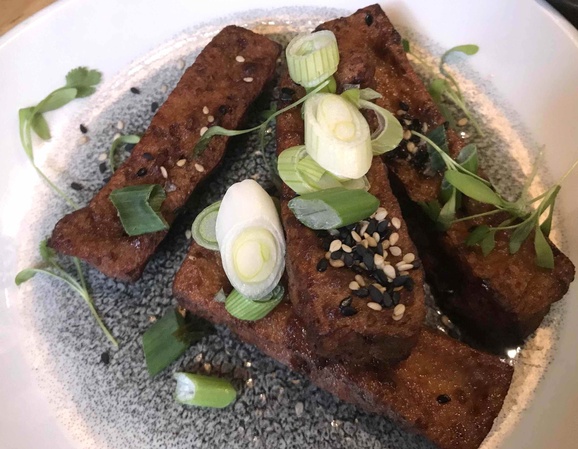 The tamarind worked better in a dressing with ginger and soy in a salad bowl of edamame, kale and spring onions (£6). Just missing was a proper chilli kick. If you’re determined to pursue an oriental path go the whole way. ‘Secret recipe’ cauliflower wings (£6) were a shadow of the original, the accompanying sriracha mayo bland but then deep-fried or roasted cauli is now a cliche, appearing even on pub (v) menus. 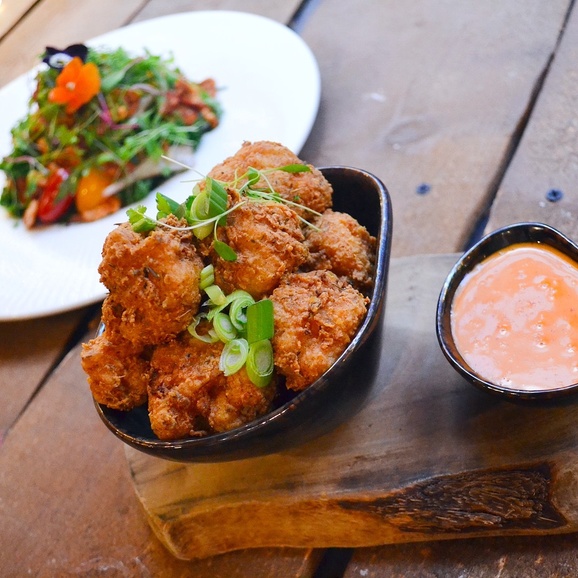 The large plates menu offered tofu ramen, a Buddha Bowl, sliders, tacos (jackfruit prominent in both of these) and a lentil bolognese, exhibiting a certain lack of imagination. More interesting was the presence of ‘fake’ fish and chips. Two weeks ago we had never encountered battered banana blossom. Now like the proverbial buses it hove into sight again. Basically these are the rusty purple buds that contain the sterile flowers of the banana plant. To get down to the usable bit requires a lot of work, like preparing artichokes. Result is akin to a jackfruit – texture of meat or, fancifully in this case fish. 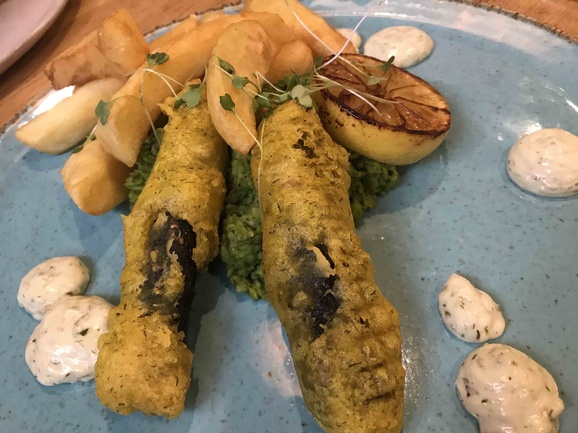 At Rosa’s Thai Cafe in London’s Spitalfields there was a crisp tempura tracery to their version. Inn Alltoment’s battered fish replica (£15), the blossom interior tasted as if they hadn’t rid it of the brine it came canned in (we presume). Our server said it had been wrapped in seaweed (nori, we suspect) before deep-frying, to give a certain fishy aspect. Highly unrecommended and the chunky chips were dull and powdery too. The crushed garden peas with mint were a redeeming factor on the plate but there was too much. 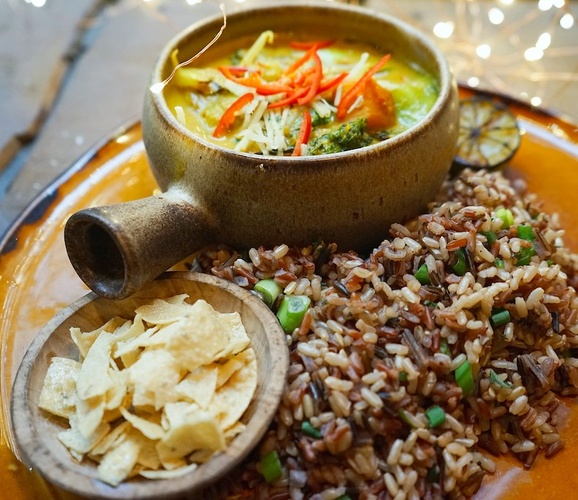 In contrast salt and pepper tofu laksa felt authentic and tasted splendid. OK, it would have been more exciting with seafood stock and large prawns instead of tofu. Otherwise, lemongrass, coconut, the usual suspects, beansprouts and spiralised courgette standing in for egg noodles made for the best dish we tried. 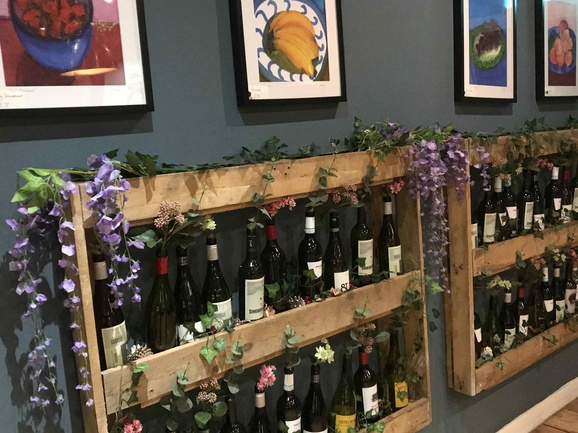 Still, it does feel a but like it’s a pioneer treading water as veganism goes mainstream. In its 18 months on Lloyd Street the dining space has evolved charmingly. Certainly with a sharing platter and a glass of their minerally Godello, it’s a lovely afternoon hideaway, but not quite the champion it was.