WE were a mite apprehensive approaching Hawksmoor along a Deansgate blocked off by Extinction Rebellion. Might a posse of plant-based apostles confront us at the door over our quest for steak and seafood? Bovine emissions (cow farts to you) destroying the ozone layer, the perils of further depleting marine fish stocks. Serious issues to be confronted but might they wait until after lunch? A responsible, sustainable lunch from one of the UK’s most ethical restaurants, but that might not cut any ice. 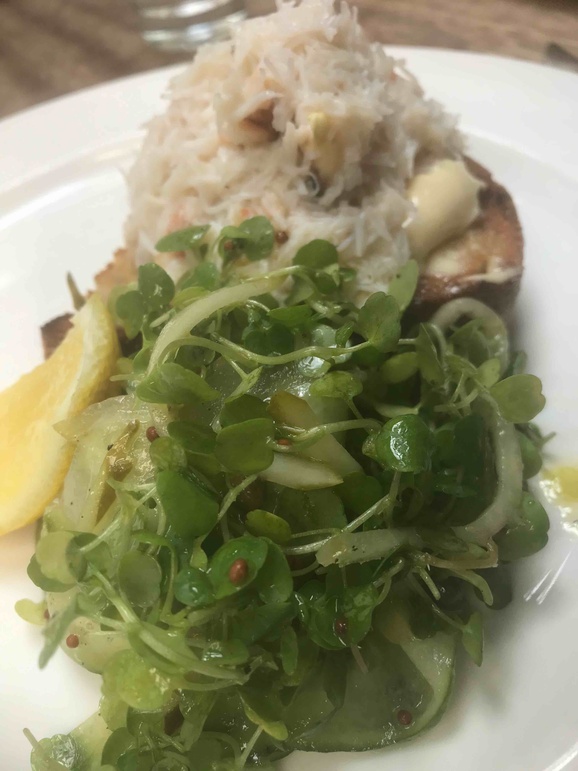 As with no deal B*****t, so with ‘the future is totally vegan’ – for the true believer all is black and white. The three hand-dived scallops (pictured above as one of our starters), in-season from prolific stocks, roasted and finished with white port and garlic were utterly delicious and substituted jackfruit wouldn’t have been. My Salcombe crab on sourdough toast was ultra fresh and untinkered with unlike so many commercial products are (plant-based included). 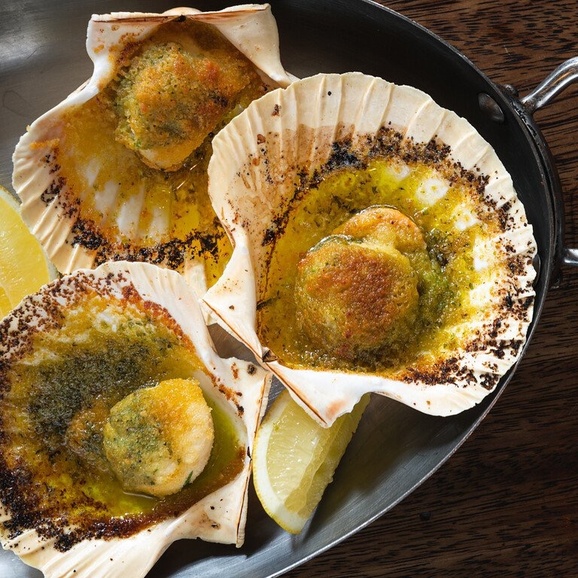 Of course, such immaculate sourcing comes at a cost. The scallops were £15.50, the crab £14. An irresistible trio of oysters, dressed Vietnamese style, added a further £9 to the bill. A pudding we shared after our meat fest, panna cotta & raspberries with a lemon & elderflower granita also weighed in at £9. 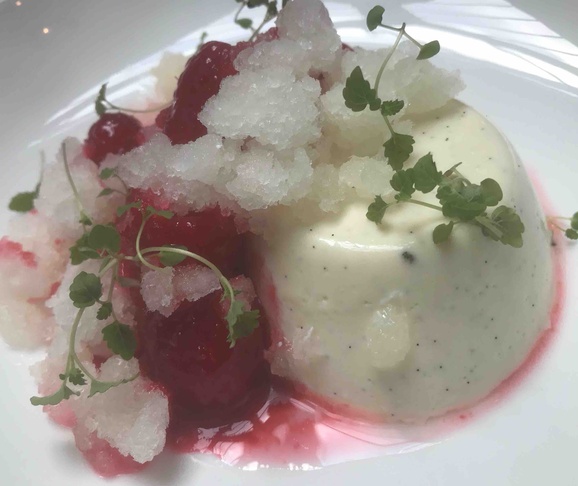 Heavy on the wallet, too, inevitably, are the steaks, which are the raison d'être of the upmarket London steakhouse group. Are they worth it? We hadn’t been back for a while, so went for broke, not quite chateaubriand broke (£13.50 per 100g), but porterhouse (£9.50 per 100g). Allow around 300g per person our server recommended – “oh and medium rare is best, the steaks are thick and really rare might leave the flesh cold in the middle.”

Porterhouse steaks are cut from the rear end of the short loin and so include more tenderloin steak, along with (on the other side of the bone) a large strip steak. Ours, all 700g of it, arrived in a cast iron skillet to share. We took the tenderer side first, the other was slightly chewier but tasted even more gorgeous. As was an accompanying red from North West Spain, Descendientes de J. Palacios, 'Petalos' Mencia 2016. 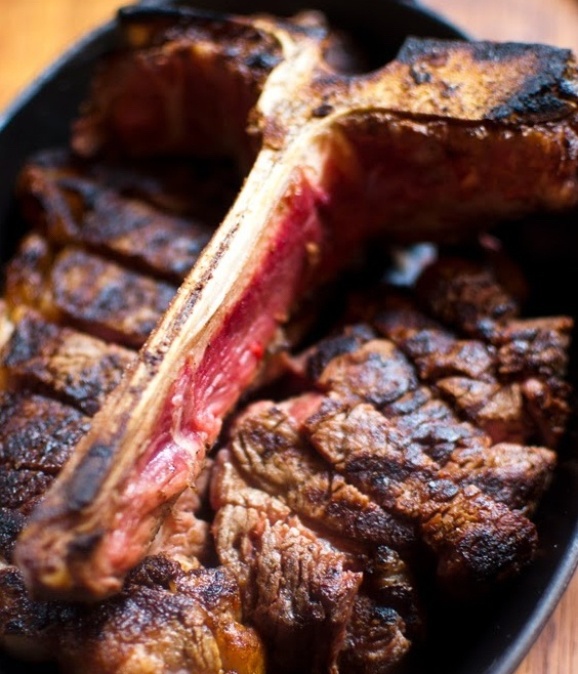 The beef was sourced from the UK. The reason, according to Hawksmoor's mission statement: “It’s a crying shame, but most international beef now comes from cattle rapidly fattened on grain instead of grass. They’re often kept in close confinement and fed additives and growth-promoters so they can be slaughtered at a young age. All to make the process as quick and cheap as possible.

“When we first opened our doors at Spitalfields in 2006, we made a commitment to serve only the very best beef that this country has to offer. Animal welfare and quality have been our focus and are things that we won’t compromise on.

“We support traditional British farming methods and work with small farms around the country who raise cattle to our specific set of guidelines around the quality of the animal’s life, which is as high a standard as you’ll find anywhere in the world. All our beef comes from cattle who have led a stress-free life and are fed on a natural diet of grass and hay. They are grown slowly in order to reach maturity and the best meat is selected, butchered by hand and dry-aged for 35 days, losing on weight but improving in flavour and tenderness.” 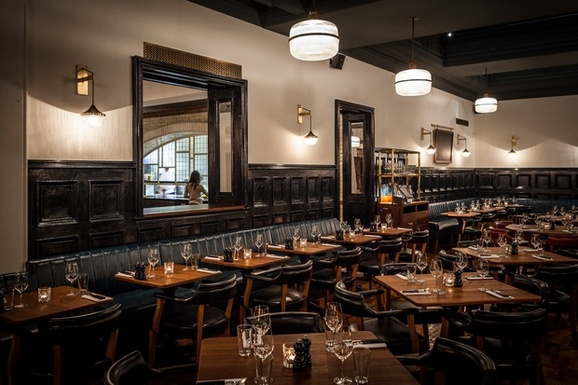 The same ethos applies to their seafood sourcing: “As with beef though, it can be really difficult to get hold of the good stuff. Before it reaches most London’s restaurants, a fish will go on an impressive journey (almost on a par with a salmon’s up-stream migration). But with more lorries, depots, warehouses and markets delays along the way are almost inevitable.

We wanted to do things differently, so we teamed up with Mitch Tonks, to our mind the best seafood chef in the country and owner of The Seahorse, a great restaurant in Dartmouth (ToM has been and loves the place). He’s helped us negotiate the complex world of seafood sustainability and fishing methods, and has shown us that (like beef) cooking fish this fresh is all about simplicity.

"He’s also hooked us up with all his fishermen contacts and his pal Nigel who has become our dedicated buyer at Brixham market. Every morning at the dawn auction he selects the best seafood, before sending it directly to us. No middlemen. No warehouses. As with our beef, the seafood we buy isn’t cheap – the best ingredients rarely are – but we think it’s definitely worth it.” 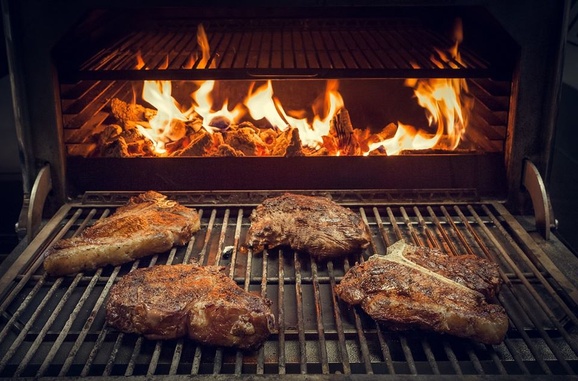 Add in an adherence to the tenets of the Sustainable Restaurant Association and Hawksmoor is doing it right. Most of us are cutting down our carnivorous consumption significantly as we confront the effect upon our planet. Quite right. Our advice is to eat less but eat better. Now if only we could stop those cattle farting.