A few feathers have been ruffled since New Wave Thai Kitchen & Bar District opened on Oldham Street in May. Its self-styled offering of ‘progressive barbecue cookery and liquid intelligence inspired by a future Bangkok’ has been marked as uncompromising by some who feel put out by its no-choice tasting menu. 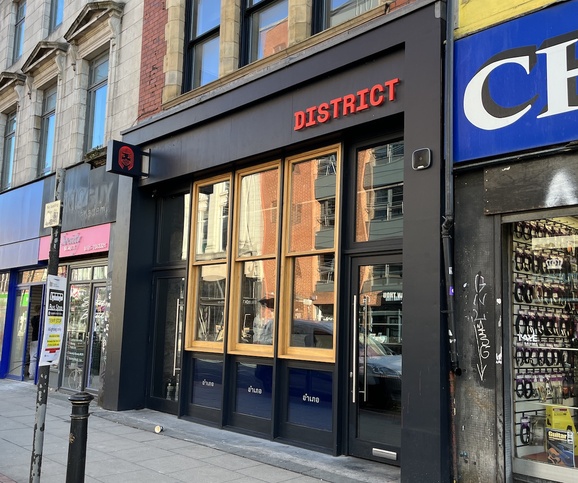 To replicate and even elevate dishes from Thailand and Laos (where chef owner Ben Humphreys’ wife hails from) District doesn’t cater for vegetarians, vegans, or those with special dietary requirements or allergies. This has got them into hot water on social media. Not in national media though. 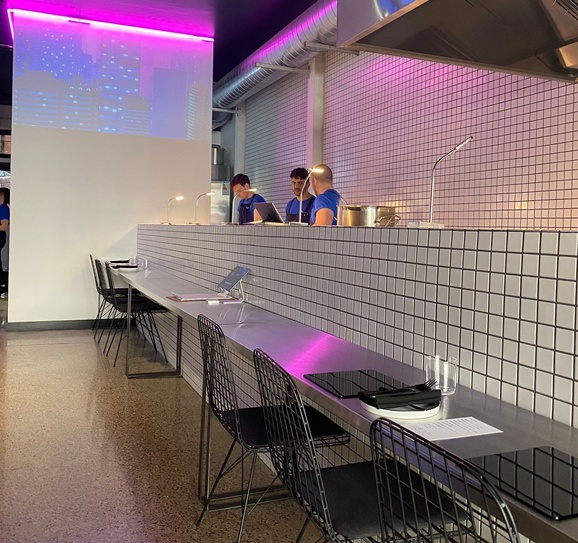 Sunday Times critic Marina O’Loughlin peppered her recent review with rarely bestowed compliments describing her ‘remarkable meal’ as ‘jaw-dropping’ with ‘not a single missed step, not an off-note or moment of tedium.’ Bookings shot up with people wanting to try one of District’s two evening tasting menus: ‘Episode II’ at £100 pp and the shorter ‘Endless Summer’ at £50 pp. Now guests are also welcome to pop downstairs to the neon-lit basement bar to try some forward-thinking cocktails, and a set lunch menu is available Thursday-Saturday. 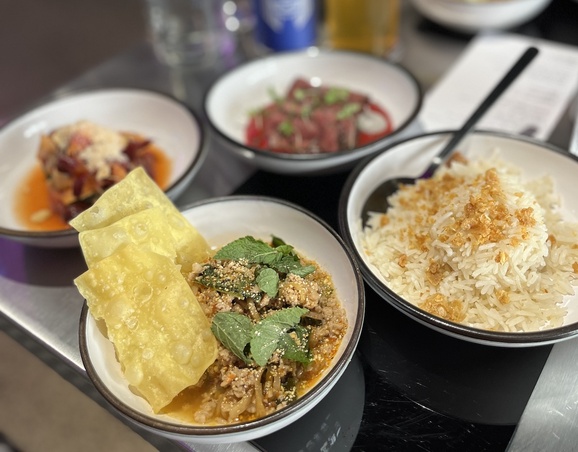 District’s ‘development lunch’ comprises of three dishes with rice for £20 per person. The dishes are all served at the same time which means you can be in and out within an average lunch hour. There’s the option to add District’s signature dessert ‘It Was Only A Dream’ a palate cleansing take on mango with sticky rice. 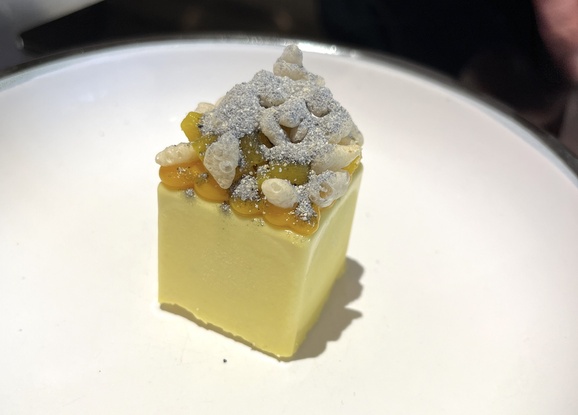 “We serve lunch Thai family style, centred around rice as the main dish. It’s all about the rice really,” says chef Ben. “We make a corn fed chicken stock with coriander root, garlic and ginger paste. Then we cook the rice, almost like a risotto, inspired by kao tom gai which is Thai steamed chicken over rice, and we crumble crispy chicken skin on top.” It’s the same rice they serve with the tasting menus. 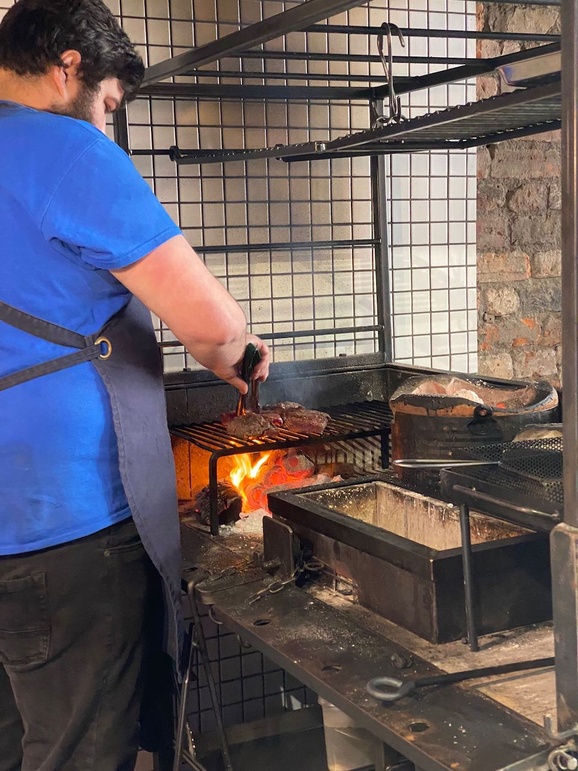 Lunchtime dishes change regularly, but the general pattern is the same. There’ll always be something off the barbecue, a central part of the kitchen, whether that’s fish, meat or vegetables. Then for contrast, usually a curry and a salad. Flavours are punchy, colours are bold and they don’t hold back on the chilli. I went through a couple of tissues during our lunch, but left on a high – I can see why chilli heat is physically addictive. 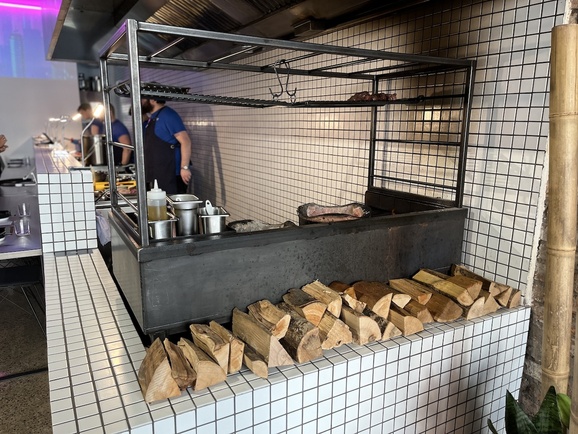 “Doing this lunch is more fun for us,” says Ben. “It gives us a chance to play around and be more creative developing dishes for the tasting menu.”

Ben, who has previously worked at Australasia, Tattu and Rabbit In The Moon, acknowledges that the pricier evening tasting menu is seen as more of an occasion thing. “You could come and eat this lunch once a week and it’ll always be different,” he says “and it’s never really going to hurt you in the wallet. I just wanted this to be more accessible. I don’t want people to ever think that we’re flash or trying to be anything we’re not. We’re such a chilled service and we just want as many people as possible to come and try the food.” 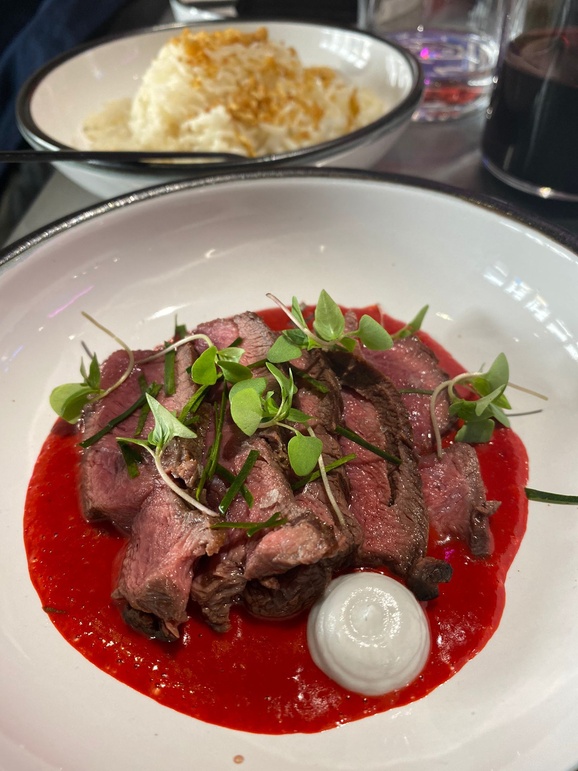 Currently lunch includes BBQ Cumbrian flat iron steak with Panang curry sauce, shredded lime leaves and Thai basil. The colour is so vibrant it almost hurts to look at it. “Ha, yeah, it’s mad isn’t it?” laughs Ben. “It’s annatto from a seed of a tree native to Mexico. It’s proper gaudy but I love it. It kind of suits what we’re doing with the neon and things.”

I spot a blob of grey smoked coconut cream. Ben says it has been infused with hot coals from the barbecue. “The flavour of coal in things is definitely a signature for the restaurant,” he says. “We’ve even got it in the drinks.” 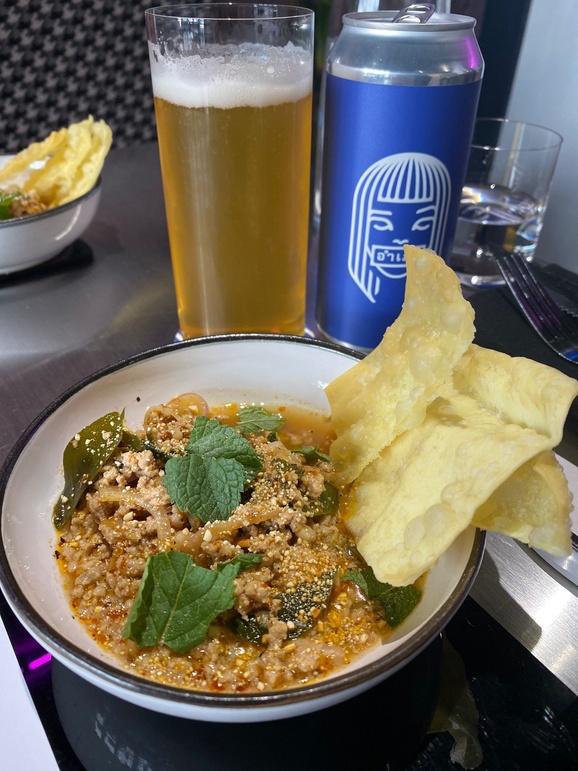 He tells me about the pork laab with toasted rice and mint. “It’s a salad from Laos,” explains Ben. “It’s their national dish but the Laotians travelled down to Isan in the northeast of Thailand and brought all these dishes that Thailand is now famous for.

“It’s usually a warm and quite wet salad of chopped meat or fish and it’s got loads of fresh mint, lime and fish sauce in it as well as flavours from dry toasted rice which is used to season at the end. We serve it with crispy wontons so you can scoop it up.” 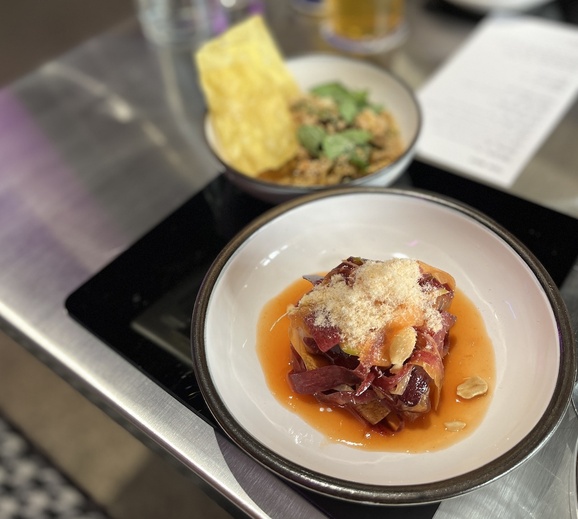 Finally, Som Tam, a fiery salad made with heritage carrots grown by Cinderwood Market Garden in Cheshire. “We make a dressing from tomatoes, tamarind, fish sauce, palm sugar, loads of chilli and a little bit of shrimp paste,” explains Ben. “That’s topped with toasted peanuts and a floss made with dehydrated shrimps.”

After lunch I had to ask Ben how he felt when he read that Sunday Times review.

“I was pretty emotional,” he admits. “More when I was telling my mum really. She knows that I’ve spent a lot of years working in jobs I’ve not been happy in and that I’ve always wanted to open my own restaurant but obviously being a chef, I’ve never really had the money. These things haven’t come easy, it’s hard work.” 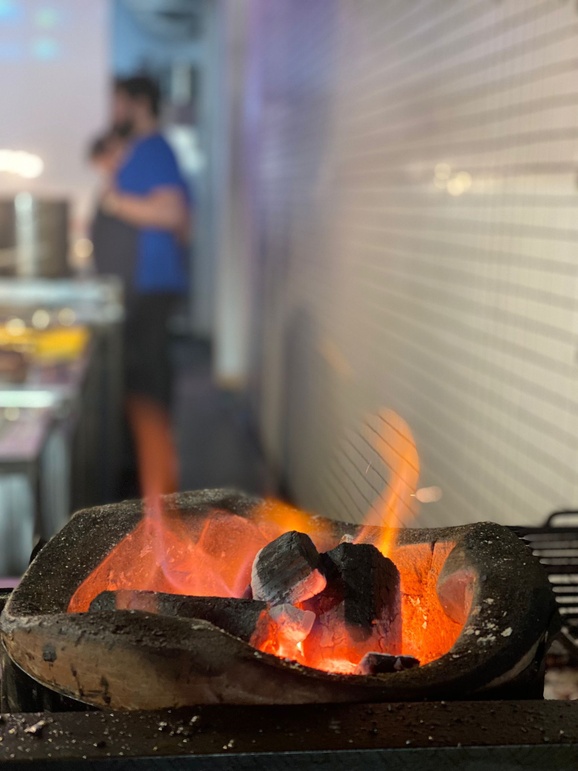 Was it a total surprise? “Yeah. It’s been nice to have someone who you respect in the industry say that you’re doing the right thing, because you do question it. I look out for everywhere else she writes about even more so now because I’m really chuffed for them getting a little boost too.” 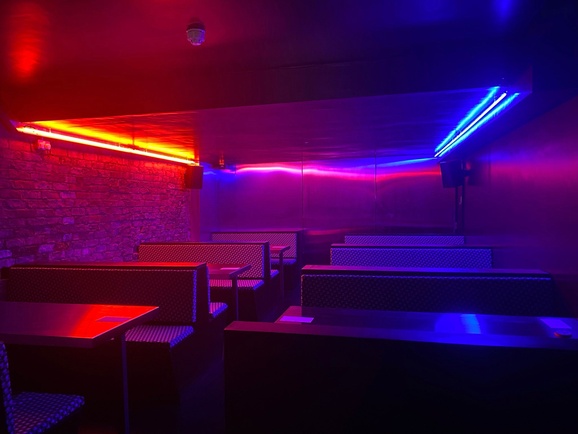 And what does he say about the criticism District has received for its no choice menu?

“People are very quick to be negative about things. It’s fair enough if you come in and you genuinely don’t like it and I’d take that on the chin. We’re not really, I suppose, a crowd-pleasing restaurant, but we’re trying to do something in particular.” 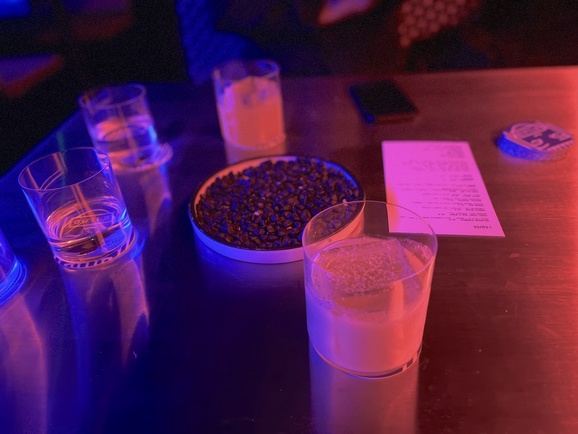 Some of District’s new ‘tech noir’ cocktails have caused passionate responses too. Ben developed the drinks menu with District’s co-owner Danny Collins. “I was coming at it from never having been a bartender,” confesses Ben. “So, I was basing it on flavours that go well together with the kind of ingredients you’d find in Thailand and then just turning that into a drink. They’re like liquid dishes basically.” 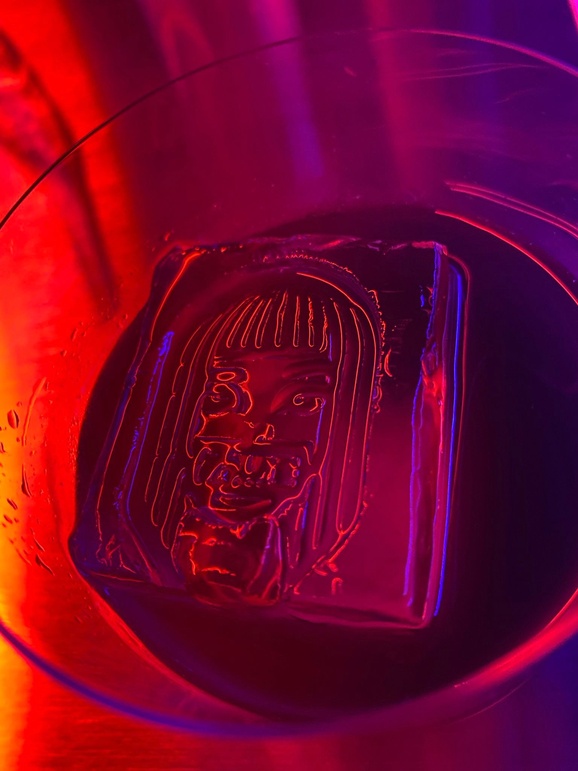 ‘Dark All Day’ includes coconut washed vodka with spring onion cordial and ‘Formax’ is a challenging mixture of smoked beef fat rum with fish sauce caramel, tomato and Thai parsley. “That’s just a Thai beef salad really,” laughs Ben. “Some people love it; some people actually hate it. Someone was proper kicking off about it the other day.” 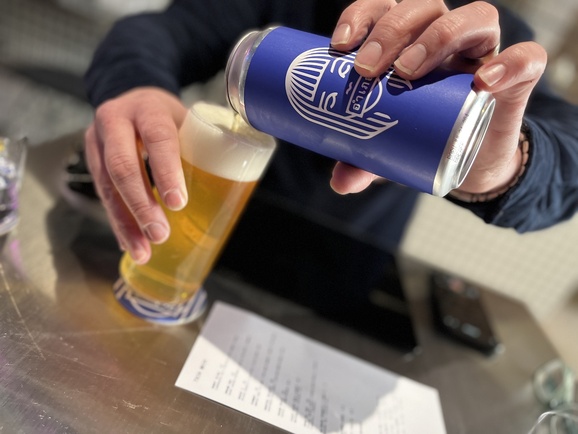 Stirring up the passions must feel great though. At least District’s food and drink is getting a strong reaction one way or the other. “Well yes,” admits Ben, “as long as you get the other extreme, which is really nice.”