SOMETIMES a new bar takes you by surprise. You’re blasé about yet another railway arch conversion and yawning at the prospect of a temple to gin and then… And then you step into Three Little Words and they might stand for OMG.

The meteoric rise of Manchester Gin has stake a further quantum leap with the transfer of their Spirit of Manchester distillery from a more workaday arch home on Temperance Street to a sophisticated six arch conversion just up from Manchester 235 Casino on Watson Street.

From outside through large floor to ceiling windows you see the copper mini-stills used for the Gin School, where you can sign up to create your own blend using botanicals from the vast selection of jars along the wall. 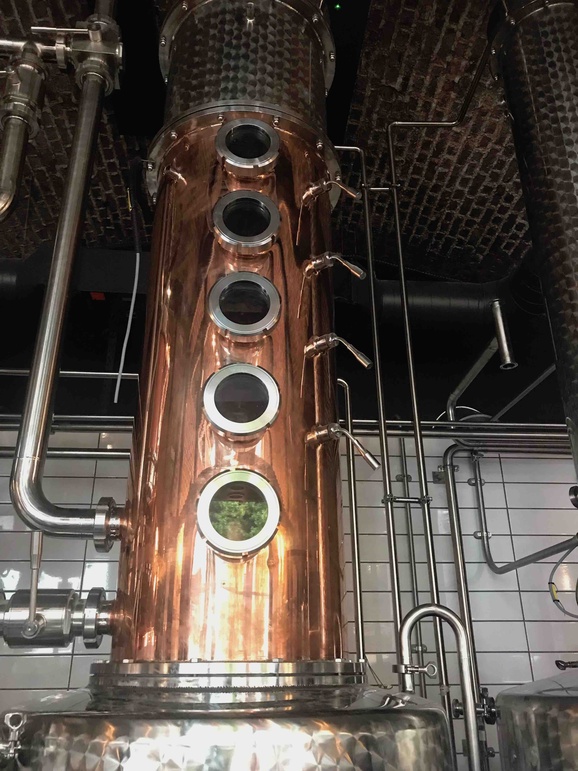 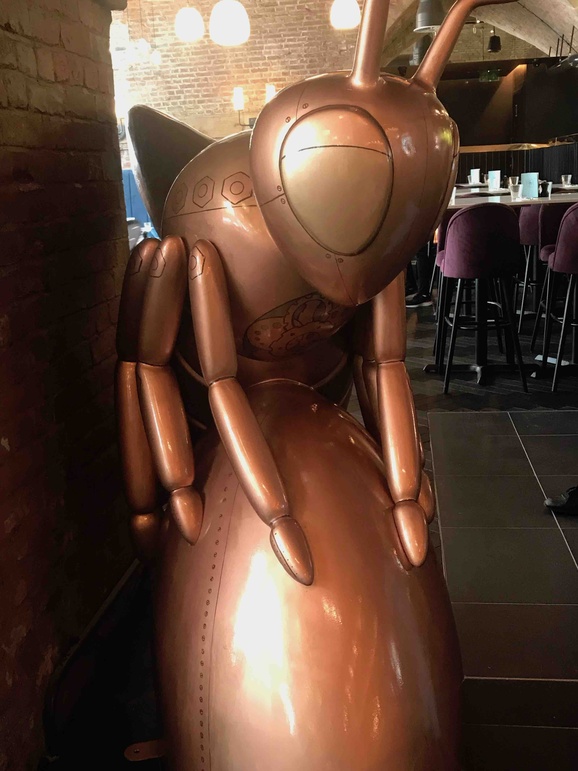 Just behind is the real deal – three gleaming copper stills including 4.2 metre high newcomer ‘Wonder Wend’ (oddly mirrored y a large bronze bee nearby) which can produce up to one million bottles of gin per year – quadrupling the current capacity of Manchester Gin production. A fourth still, the original Wendy – named after the mother of co-owner Jen Wiggins – should be in situ by the time the soft launch is over on September 14. 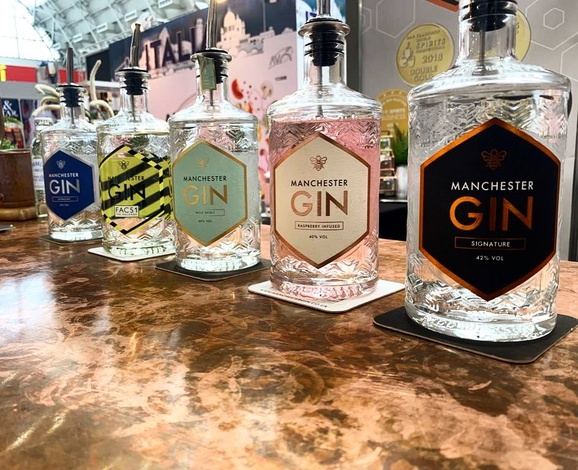 ‘Soft launch’ because this is not just a distillery and gin school. Three Little Words is a 70-cover bar/restaurant on site, for which Jen’s partner Seb Heeley has huge ambitions. Only three years after the couple starting making gin in their Chorlton house Seb sits down with us at this glorious venue and tells me: “We have appointed talented people to run both the cocktail/drinks operation and the kitchen. In two years I’d like our food to have recognition from Michelin. Similarly we are aiming to be in the world’s Top 10 Bars.”

No pressure there then, but there is definitely something driven about likeable Seb. Having created a distinctive gin brand that’s sold in the likes of Harvey Nichols and Selfridges (the latest of their five-strong range, the small batch ‘Hacienda’ has just been released) he’s researching premium rum as the next project. “As with the gin it will take a lot of trial and error to get it right.” 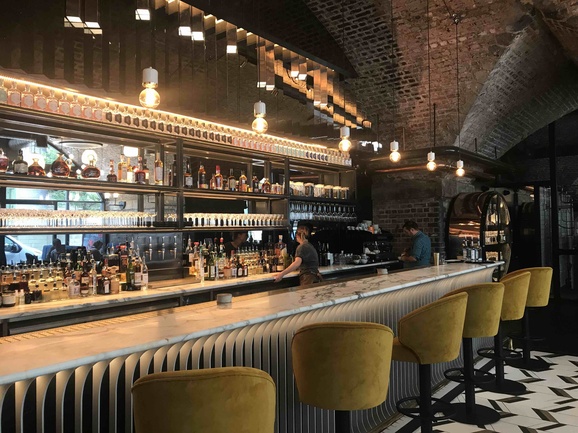 Everything about Three Little Words reflects this attention to detail. Not just the decor, which includes a living plant wall, mixed height plush seating and a burnished brass and marble bar that beams welcome. The food is in the hands of Jimmy Carr, once of Evelyn’s in the Northern Quarter. His remit here is to create a menu majoring on locally sourced produce and inspired by the botanicals used in the gins. Taking food and drink matching to the next level. 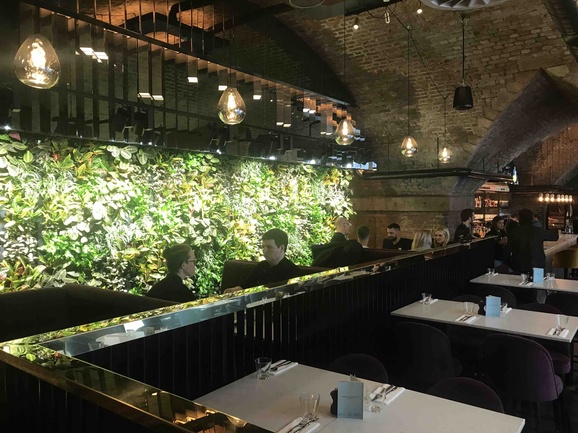 If that sounds a touch intense check the all-day menu and it has a laidback ease about it. Breakfast features the likes of forest mushrooms on toast with thyme and garlic or

a smoked haddock bowl with egg, cream, lemon, dill and sourdough. In the afternoon brunch runs until 4pm offering savouries such as pumpkin hash and yummy sounding drop scone pancakes with caramel. 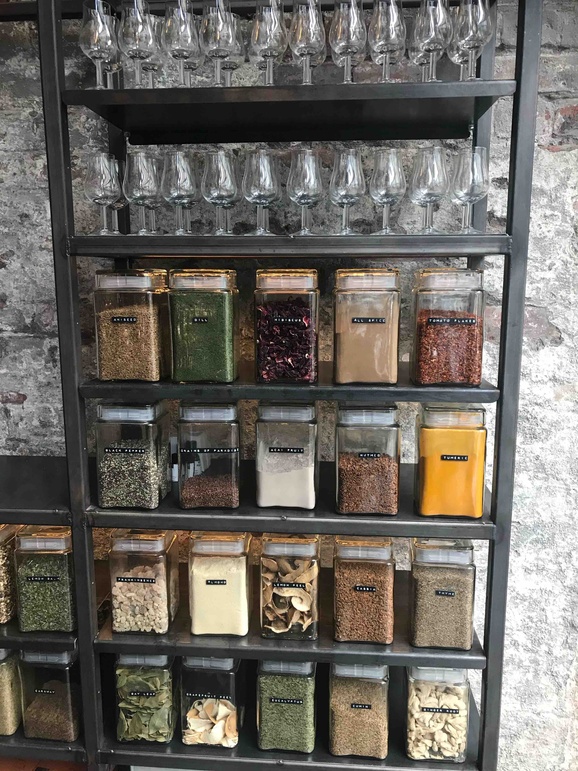 Gin and rum are not Seb’s only drinks passions. There are three beer taps, one serving a regular Beatnikz Republic beer, the second, another proud brand made in the city, Manchester Union Lager, the third rotating guest beers that have to be local.

It gets more complicated with the cocktails. Mixologists do like having a strong theme these days. Here it is ‘A Love Story’, tracing a path from lust (short, fruity drinks, mostly red and pink, like ‘swipe right’ made with raspberry infused gin) to ‘ultimatum’ where you’ll tackle the likes of ‘ground for divorce’ made with Mr Black Cold Coffee Liqueur. 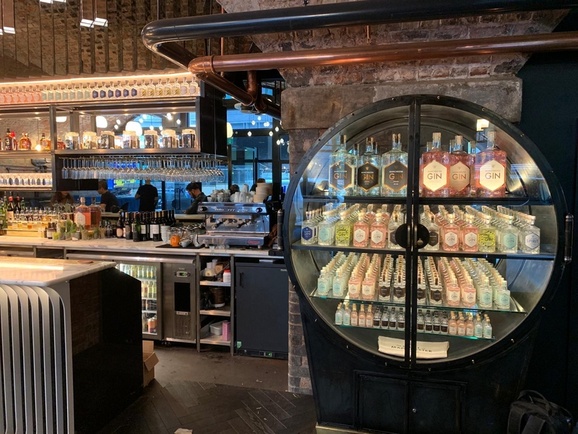 We stuck to a straight-up G&T, made with their Wild Spirit gin. The inspiration for this came from taking their new rescue dog pet for walkies in Chorlton Water Park and realising how many forageable plants are out there to act as botanicals. Citrus, mint and liquorice hints make it a perfect G&T base. Not quite as complex at 47 Monkeys, the gin that brought Seb and Jen together (it’s a long story).

That particular premium  tipple from Germany’s Black Forest uses 47 different botanicals. We suspect, however hard you raid the Gin School shelves carrying 61 varieties of fruit, herb and spices you’ll ever hit that target as you create your own ‘brand’ to take home. 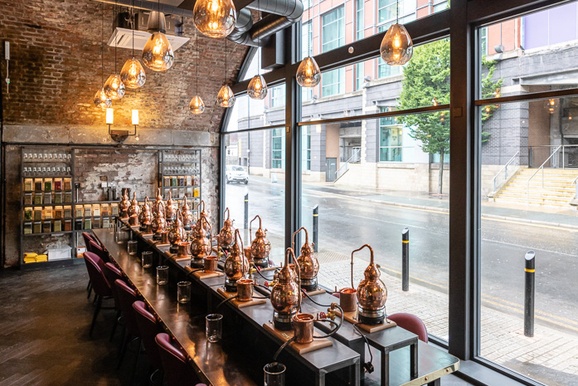 The immaculately laid-out ‘laboratory’ did remind us of a chemistry lesson back in the day  with 16 miniature copper pot stills in place of bunsen burners.

The Gin School experience runs for two-and-a-half hours and includes a gin and tonic on arrival as well as the chance to try lots of different types of gin to stimulate your palate. Places cost £85, while £20 gets you a guided tour of the distillery, where you’ll be introduced to the quartet of stills – Wonder Wend, Emmeline (Pankhurst), Victoria (Wood) and imminently Wendy. 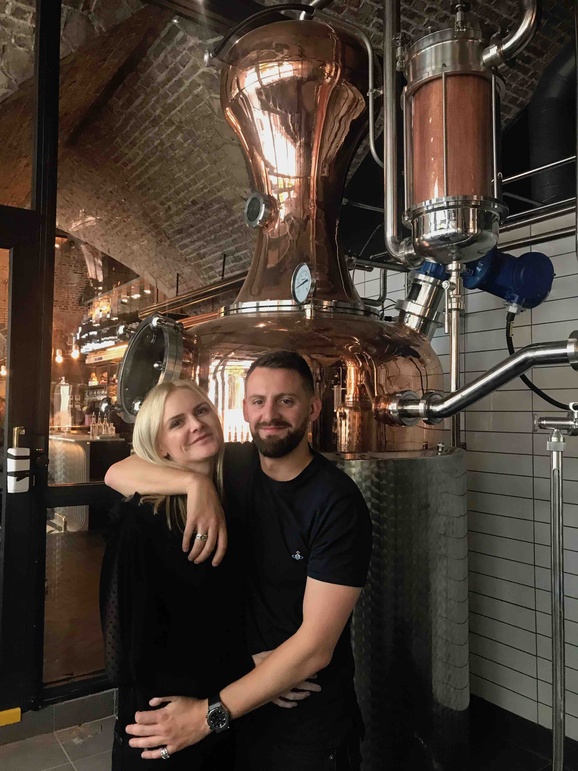