Manchester-based Pollen, the sourdough bakery and viennoiserie, has revealed it is to open a second city centre site early next year. Pollen’s new flagship pastry kitchen and café is the latest addition to the KAMPUS neighbourhood, where it will occupy a 2,600 square foot unit on the ground floor.

Pollen at KAMPUS will feature an expanded brunch menu and an open kitchen to allow customers to see the patisserie masters at work. There will also be space for workshops and supper club collaborations.

Pollen, one of Manchester’s better known independent bakeries, began in an archway round the back of Piccadilly train station in 2016. Queues soon began to form outside the unit for their range of delicious sourdough loaves and perfectly laminated croissants, pain au chocolate, pain au raisin and seasonal Danish pastries. Their ‘cruffins’ (a cross between a croissant and a muffin) usually sold out within hours. They also soon caught the attention of other local independent venues who began to order wholesale, and chefs who started commissioning special loaves for their menus. 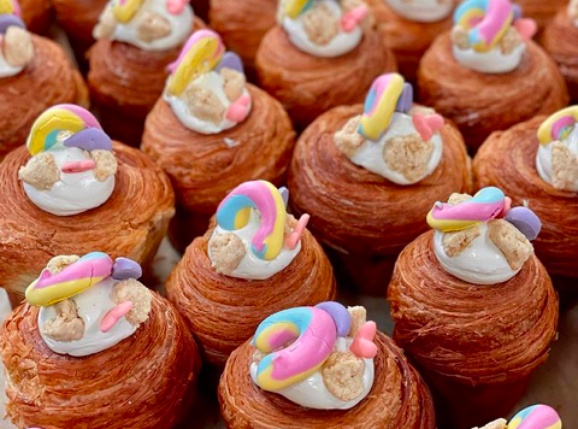 Their new bakery café, which is set to open early in 2022, will look out over the Kampus garden and will offer seating both indoor and outdoors. After General Stores and Nell’s Pizzeria, Pollen is the latest independent business to sign up at the Kampus community developed by CAPITAL&CENTRIC and HBD.

“We’d been looking for a place in the city to grow for a while and Kampus really appealed to us,” says Hannah Calvert, who co-founded Pollen with Chris Kelly. “The location right next to the canal is perfect and it’s rare to find somewhere with such a strong sense of community and independent spirit, where we’ll be side by side with other like-minded businesses.

“Alongside all the usual grab and go Pollen favourites we’re going to be expanding the brunch menu, with lots of local seasonal produce and some exciting new creations,” she added.

“The support we’ve received from the Manchester community over the years has been incredible, so it’s great to start the next chapter with a new café, even more cakes and pastries in a pretty incredible setting.”

Fit out of the store is set to begin next month, designed by Manchester-based interior studio, NoChintz.