The Oast House to celebrate 10 years with 10 birthday parties

Back in 2011, The Oast House originally opened its doors as a pop-up venue in The Avenue, Spinningfields. It was a collaboration between Allied London’s Mike Ingall and the late hospitality brand maker Tim Bacon who wanted to build something unusual that would bring revellers into the area which was seen as more corporate-led.

Their idea worked after Manchester-locals (and those further afield) took the pub to their hearts leading to The Oast House signing a long-term lease and cementing its place in Manchester’s social scene. It had a refurbishment in 2018 and the addition of an all-weather tipi outside makes it a great central place to sit and enjoy a drink, rain or shine. 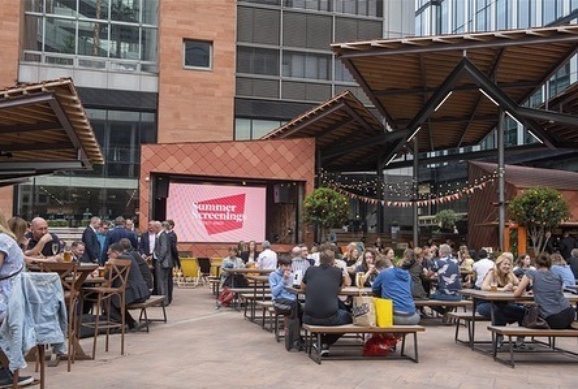 In October the venue will turn ten years old, but in true Oast House style, they’re not just throwing one birthday bash, they’re putting on ten of them, every week leading up to the big day itself.

The Oast House will celebrate their 10th birthday in style with 10 weeks of celebrations to celebrate their favourite milestones moments as they count down to October 29th.

But what’s a birthday party without a present? This is why The Oast House is planning to raise enough funds to donate £10,000 to 10 local charities to help fill the gap in funds.

The funds will be raised through the sale of £5 guaranteed entry and £10 tables tickets – where all the ticket cost will be donated to charity – a free drink of the week and a guaranteed table (which is no small thing on a busy Friday night). The Oast House will also remain open to walk-ins and guests can opt to donate to the charity on the night.

The parties get started on September 3rd, by marking The Oast House’s TWO Guinness World Records - one for World’s Largest Cider Tasting and the other for World’s Largest Beer Tasting. £5/£10 tickets includes a seat, a complimentary pint of Aspalls and £5/£10 donation to Hope Mill Theatre.

Subsequent themes, events and charities will be released weekly via The Oast House’s social, and website and donations will be made at the conclusion of the 10 weeks. For the full schedule, or to purchase charity entry tickets, visit theoasthouse.uk.com/10th-birthday