‘FELIZ Navidad’, Ana from Granada. Discovering your tiny tapas bar among the foodie shipping containers of Hatch has made it a merry pre-Christmas for ToM. The best tortilla we’ve eaten outside Spain, silky croquetas, those benchmarks of the national cuisine, and an array of charcuteria and cheeses from her native Andalucia all make you reassess the less authentic tapas we often settle for. 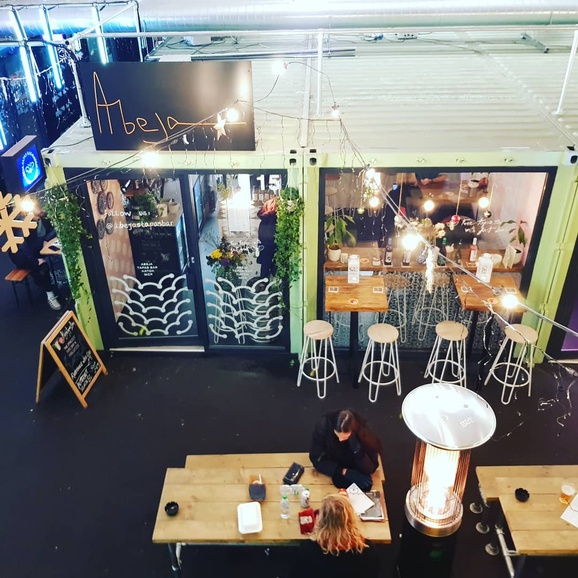 It has not been an obvious route from Granada to a 16-cover bolthole underneath the Mancunian Way. Her career as a biochemist has taken her on a winding Camino, far from her roots, including three years in Grenoble. Even her arrival in Manchester happened because the London School of Tropical Medicine relocated her lab up here. 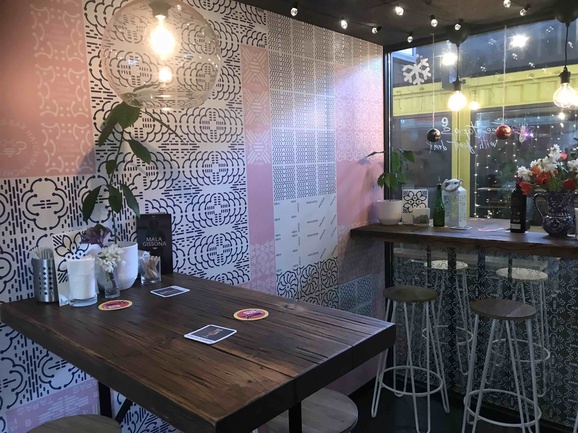 Committed home cook Ana's original plan was to open a full restaurant in Cutting Room Square close to the Ancoats apartment she shared with her partner. Logistical worries meant they didn’t sign the lease. On the rebound the accommodating attitude of Hatch’s landlord, Bruntwood, gave them a more modest launchpad for Abeja. 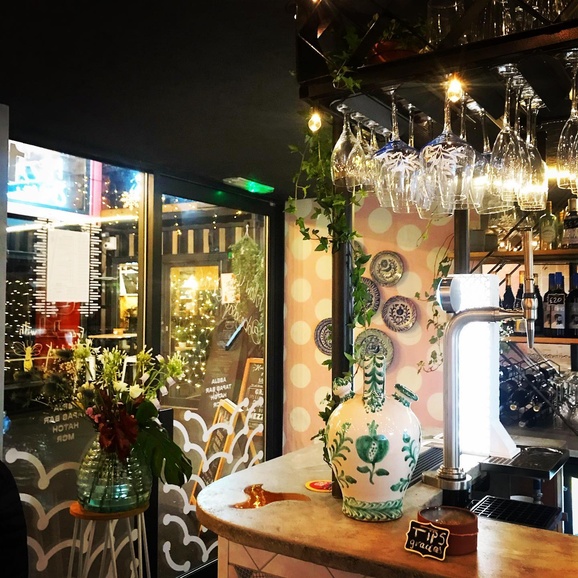 “It’s certainly been for the best – I’ve never run a restaurant before,” says Ana (Villegas) as she pours us a glass of Vermut concocted in Granada, from where she imports most of her ingredients and all of her wines. “This feels a place to establish a reputation and we can take it from there.”

Result a genuine tapas feel, as if you were on a crawl in Granada’s Albaicin quarter – albeit without the sun cracking the flags outside or a yearning snatch of Cante Jondo echoing down an alleyway. Still that heady, herby Vermut sets the scene perfectly and at just £3.50 a pop. Equally evocative is the scent of prawn shells from a bubbling stock pan in the open kitchen. In Manchester’ tiniest tapas joint you are on intimate terms with the afternoon prepping. 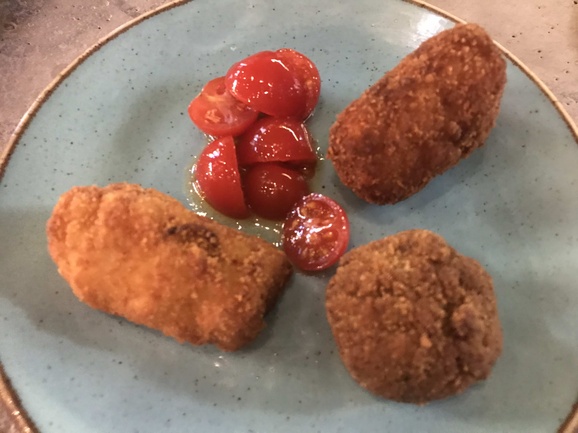 Prawn and cod are just one filling for the croquetas – time-honoured test of a Spanish kitchen. Here a portion of four costs just £4.50. Pick is the special of a day, melding sweetly soft morcilla (black pudding) with pepper, garnished with tomato in a gloriously fragrant olive oil (from Granada naturally).

The same olive oil features in tomato bread that accompanies that moreish tortilla, soothing in texture and flavour, a surprise star of the show. 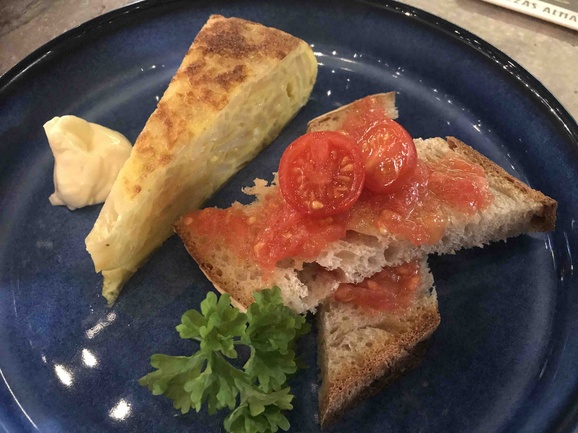 The twice-weekly easyJet service from Manchester to Granada must take some hammer from Anna as she stocks up from carefully curated suppliers. One that stands out is Rufino, whose intense Pedro Ximenez marmalade puts standard membrillo (quince paste) in the shade as an accompaniment to a sharp Manchego-like Guadix sheep’s cheese that forms a mixed ‘Tabla’ with regional charcuteria (£14 for one to share, larger than our taster below). 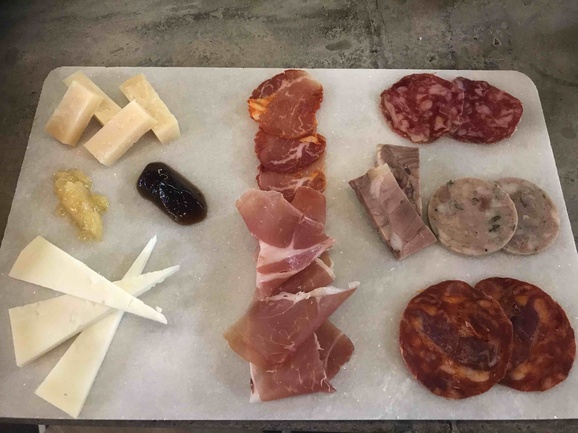 The straight meats plate, ‘Tabla de Embutidos Granadina’ (£13) showcases the cured riches of the region (lomo, chorizo and salchicon). The white sausage and pork terrine is not for us but Abeja’s 20 month aged Serrano ham is superb, gentler than Iberico Bellota but packed with flavour. 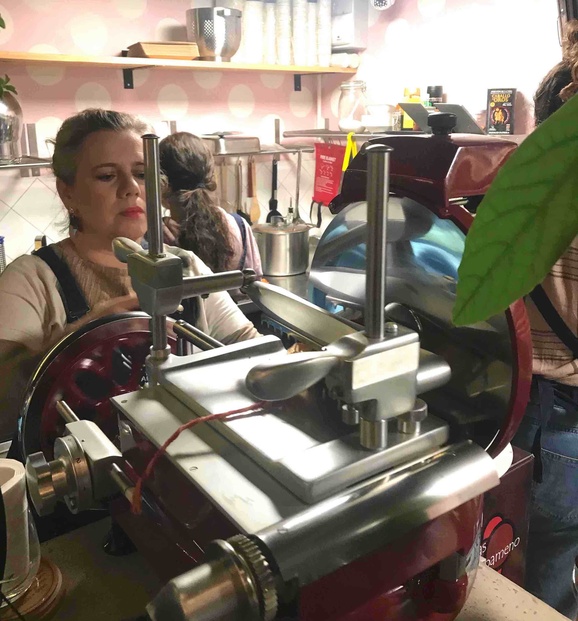 Ana is meticulous about jamon. She won’t stock the whole Ibericos because conditions are right for its storage here. She also rejects the snobbery that ham has to be hand-carved, but her slicer is very hands-on and precise, a rejection of industrial machines.

Accompanying green and black olives are probably the best in town too, while a hot dish of Berenjenas fritas con miel (£4.50) took us by surprise. Who would have thought frying strips of aubergine with sugarcane mollasses could be such a sweet/savoury winner? Like the missing link between churros and a Sicilian caponata. 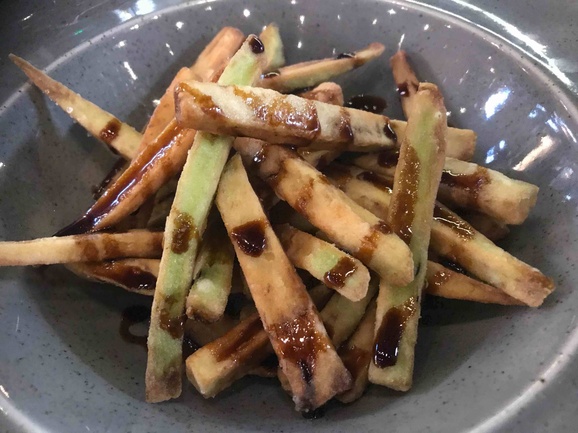 You guessed it – all the wines are from Granada’s high hinterland. Ask for Rioja at your peril. They don’t even stock a sherry and the one gin is the exquisite ‘Med in a glass’ Gin Mare at a very reasonable £7.50 for a double. Craft beers are from San Sebastian and Barcelona – maybe that’s not an Andalusian thing.

The most expensive red was a classy, complex £35 Garnacha from Fontadei; lovers of subtle oaking should opt for the Muñana Tres Cepas from the Sierra Nevada – a wicked blend of Syrah, Cabernet Sauvignon and Merlot. As warm and welcoming as Abeja – which translates as Bee. How appropriate for this little ray of sunshine under the Mancunian Way.