Review – Afternoon Tea in The Winter Garden at The Refuge

Afternoon tea was originally designed as a meal to keep you going in between an early lunch and a late dinner, but the best ones contain a parade of deceptively small items which collectively hold enough calories to fuel a half marathon.

There are a number of excellent afternoon teas to be had in Manchester, in grand hotels and independent cafes, and The Refuge by Volta at Kimpton Clocktower Hotel launched their first ever tea on 20th July. The Refuge’s new afternoon tea menu is served exclusively in the stunning surroundings of the Winter Garden and is available every Tuesday to Thursday, from 1pm to 4pm. 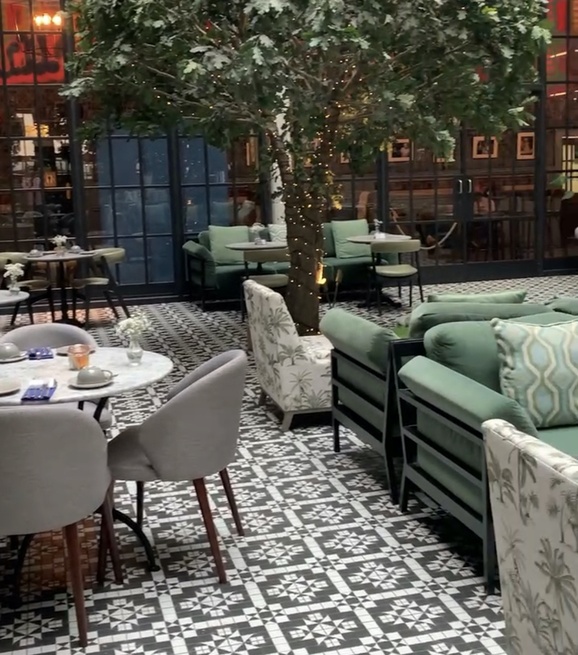 The Winter Garden has the perfect atmosphere for this sort of thing. The sound of crockery and cutlery echoes gently across the tiled floor and the green velvet upholstery and trees festooned with fairy lights create a timeless cocoon which seems a million miles away from the busy Oxford Road junction nearby. 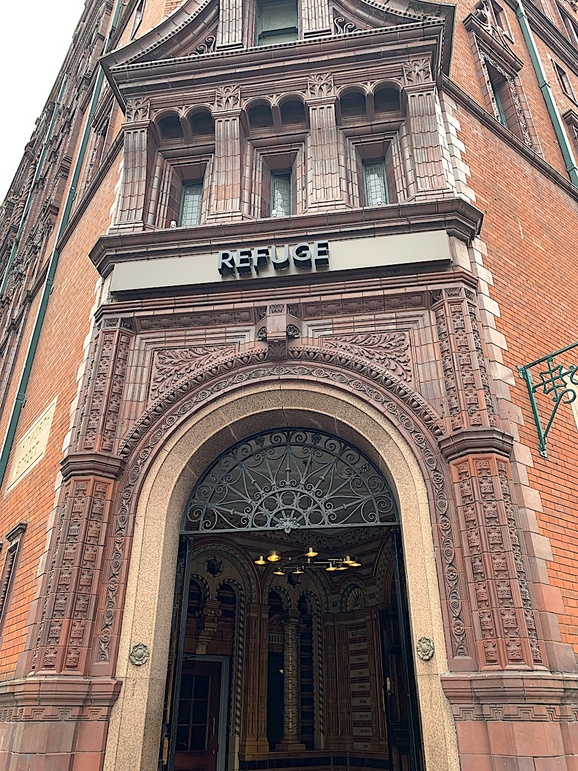 The Refuge’s afternoon tea is self-described as ‘a classic affair with a contemporary twist’ which is pretty accurate. It features picture perfect savoury treats, scones and three-tiers of no less than five different cakes and sweet fancies. Probably best not to have breakfast before you visit….and it’s likely you won’t want dinner afterwards. 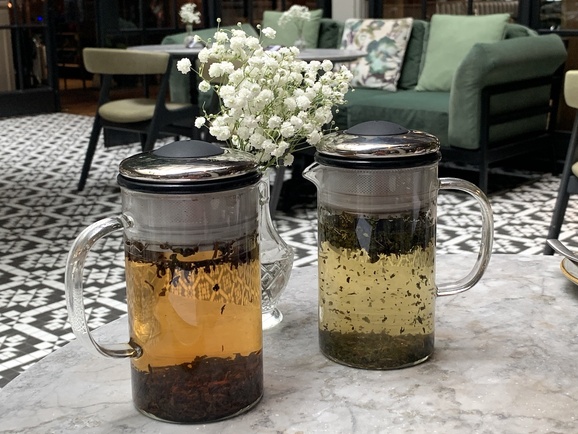 Choose from a selection of high quality loose leaf teas from Manchester-based The Brew Tea Company, or a coffee from local roasters Heart and Graft. If you want to make it a boozy teatime, then there are plenty of alcoholic add-ons. There are tea-themed cocktails like rooibos sbagliato or peach tea bellini, or various types of fizz. 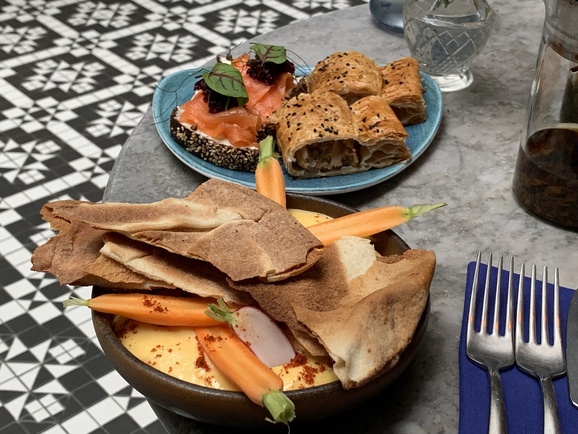 Savouries are served first. Oak-smoked salmon generously overlapping a slice of rich pumpernickel, with beetroot chutney and labneh; a hearty pork and kimchi sausage roll, and – star of the show - cheddar cheese custard with flatbread crisps to chase it around the dish, and baby carrots and radishes to add some bite to the smooth, silky dip. 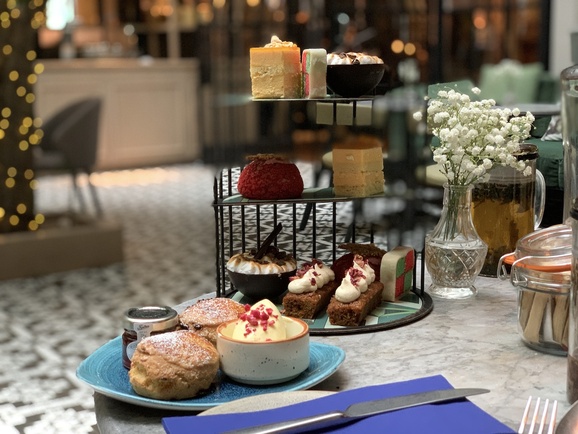 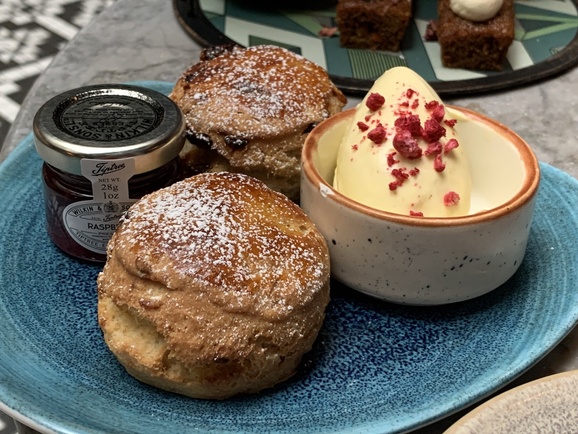 Then five types of cake arrive on a three-tiered half birdcage (that’s not including the delicious date and sour cherry scones with strawberry jam and clotted cream) It isn’t easy deciding which to try first. Maybe you’re supposed to do it like you would a cheese board, from lightest to richest…but how to judge that? 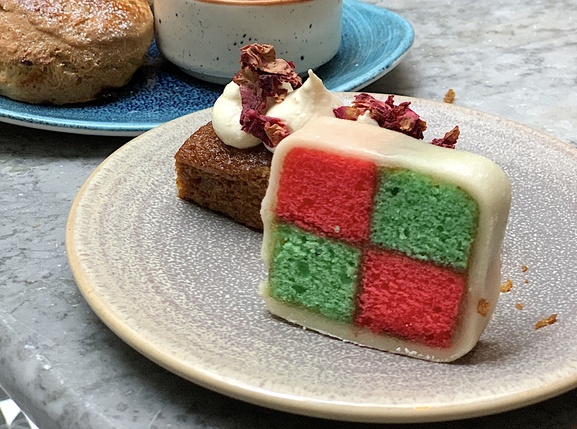 We made an educated guess and started with a slice of fig battenberg. This is a funked-up version in bright green and red instead of the traditional pastel pink and pale yellow version Mr Kipling prefers. 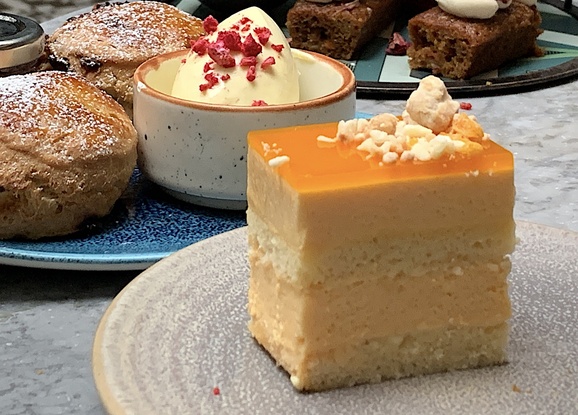 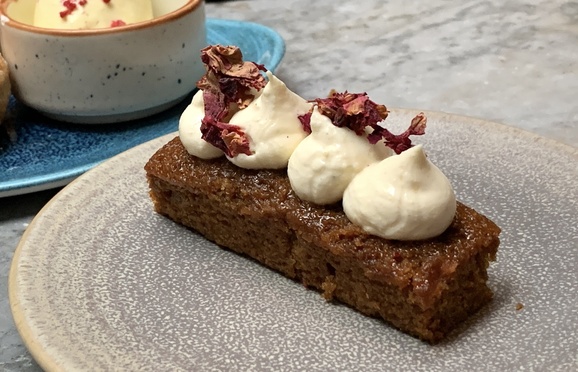 Spiced carrot cake, cardamom, rose petal was pleasant enough but quite dense. If they did decide to ditch one of the cakes (because five is A LOT), this would be the one that should go. 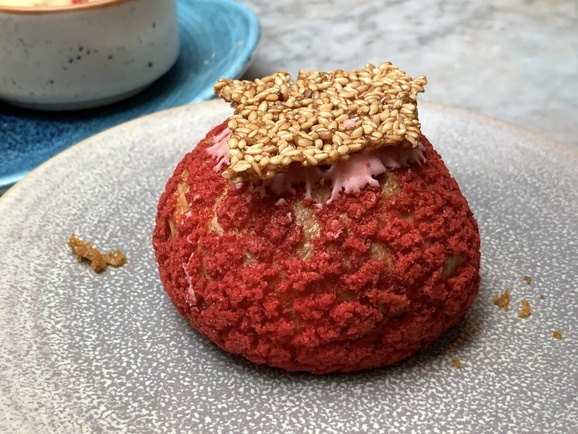 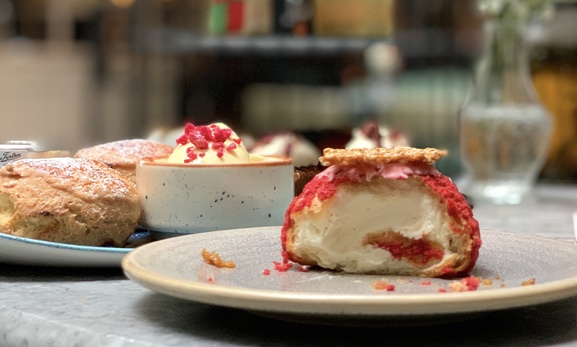 Next, our favourite - yoghurt, honey and tahini choux bun. Crisp, sweet and creamy with just a hint of sourness to stop it being too cloying.

Our final cake was a heavy hitter. The Refuge’s version of Black Forest gateaux is intense chocolatey sweetness packed into a plain chocolate shell. In the bottom is a layer of slightly boozy cherry compote, then comes a layer of rich fudgy cake, a layer of chocolate mousse and a soft scorched piped meringue. It probably contains more sugar than a fleet of Tate & Lyle lorries. 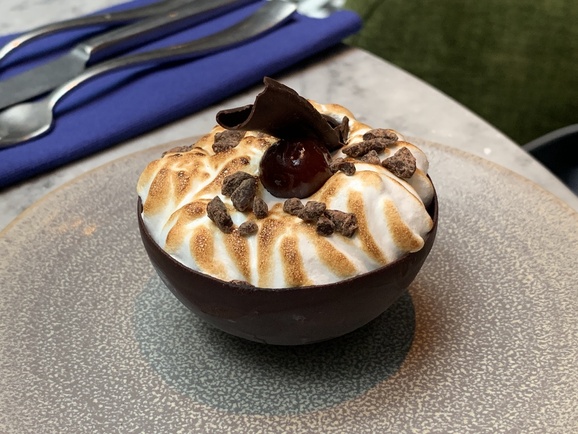 Priced at £29.50 per person, this is an afternoon tea to remember. But if you do manage to complete it, you’re probably going to need to lie down afterwards. Good job the Kimpton Clocktower hotel has plenty of rooms. Perhaps that’s why the best afternoon teas can often be found in hotels.

The Refuge’s new afternoon tea menu is available every Tuesday to Thursday, from 1pm to 4pm. You can book your afternoon tea now here: www.therefugemcr.co.uk.