AN esteemed food writer colleague, steeped in his native Rochdale, devoted much of his review of Bombay Brew to accounts of his Eighties high jinks there when the red brick edifice, historically the Wellington Inn, hosted a nightspot called Bojangles.

As it happens, I’m probably better acquainted (after three visits) with the nightlife of Bombay itself, where a Wham playlist still wakes many a clubber up before they go go. That Raj city is now bigged up as Mumbai. How times and names change.

In this turnaround it’s all about the BB effect. Ben Boothman is a force of nature on the Rochdale scene. Still Bombay Brew is a surprise package, a £150,000 re-fit creating a craft beer and Indian street food combo, with echoes of another buzzy BB, Bundobust. 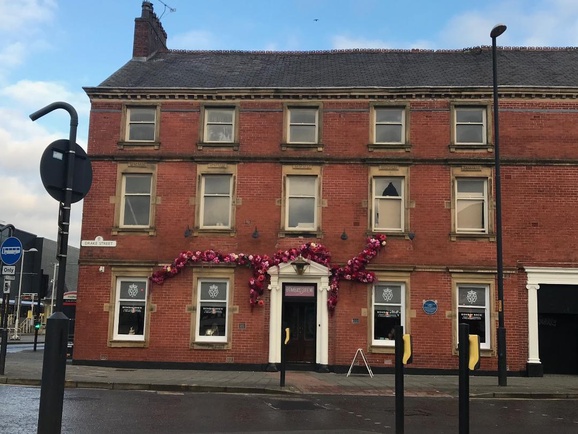 This man never stands still. His flagship is The Flying Horse, a three minute walk away in the shadow of Rochdale’s remarkable Town Hall. It had been languishing as ‘The Sport’ before he took over and restored the original name. In 2019 it was the CAMRA Greater Manchester Pub of the Year for the second year running and also shortlisted for Pub/Beer Bar in the Manchester Food and Drink Awards. Toad Lane’s The Baum, a previous CAMRA national pub winner, is also under Ben’s wing and ToM loves his Littleborough micro-pub (Adolfus brings a Caribbean vibe to the laidback Hare on the Hill). 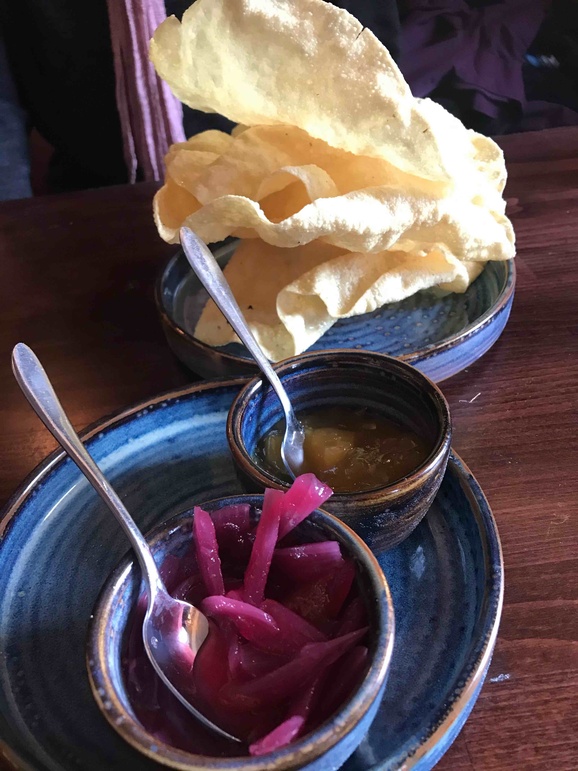 So his craft (and cask) credentials are immaculate. He has enlisted Calderdale brewery Vocation to create ‘Bombay Brew’, a 3.9% beautifully balanced house session IPA. But what of the food side of things? Catering is in the Boothman blood, too. As a sideline they run Quirky Catering, hired by both Rochdale FC and Oldham Athletic for match day hospitality. But doing Indian in a town where spicy Asian (mostly Bangladeshi) cuisine comes as standard? Whoo! 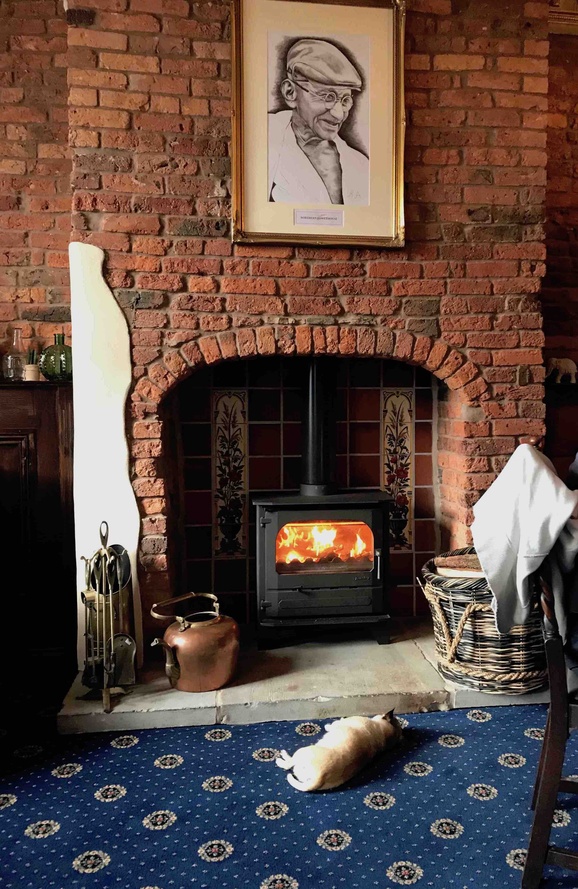 Quirky actually sums up two elements here – the one dish that reaches up and wags its tentacles at you, Masala Butter Octopus with Poached Egg, and the menu’s commitment to being a non-coriander zone for those who find the fresh herb a soapy turn-off.

We were dining in the pet-friendly lounge with a log fire to curl up in front of (the dog not us) and while we were awaiting our £8 cephalopod starter we gazed up at the mock-Baroque ceiling inherited from the pub’s previous incarnation. 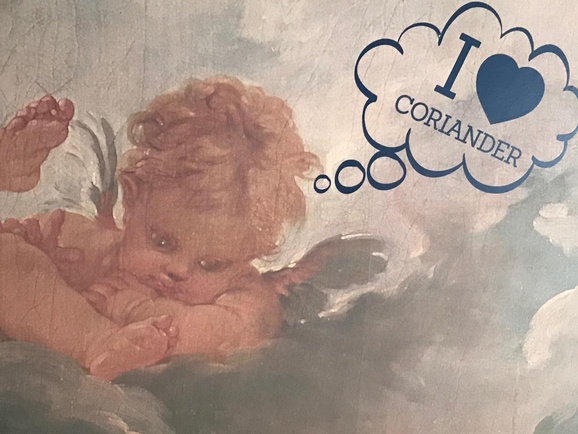 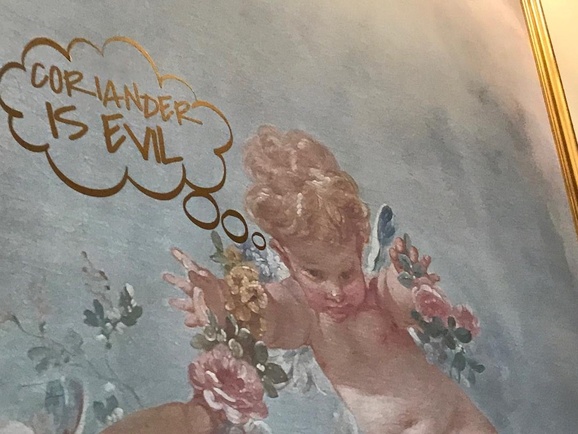 Cherubs. We love a frolic of decorative cherubs, but these had graffiti thought bubbles: ‘I love coriander’ versus ‘Coriander is evil’ in that celestial battle between Cilantrophiles and Cilantrophobes.

Then Moby Dick hove into view. Sorry, our octopus, leviathan-sized as no ‘small plate’ should ever be. With that girth would it be overly chewy? No. Tender, pooled in yolk and subtly spiced, it was delicious. How can they make a profit on this dish, half of which I took home to create a salad with? 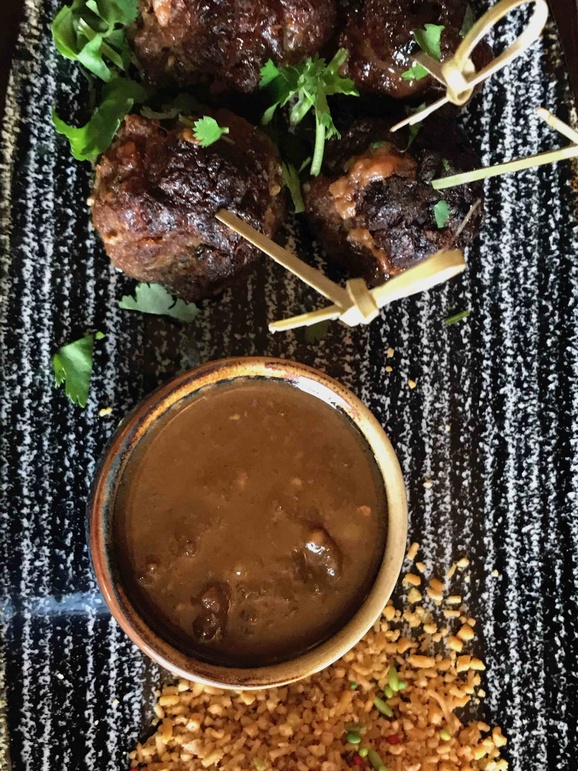 Maybe cutesy quirks should be banned from menu descriptions. Still Bom-Bae Lollypops (£6) turned out be seriously tasty koftas, pungent with ginger, cumin and garam masala, while our native black peas made a perfect marriage with chick peas in a £5 pakoda.

In retrospect we should have continued with the small plates on the left hand side of the menu. They plus the fine beer selection, cool decorative ideas and utterly charming service are what makes this a four star review. The curries were a let-down. Basically it’s a trio of styles, a bit old school curry house – with each you choose from chicken, prawns etc – meets pub curry, offering both rice and a chunk of naan. The unpolished rice was a plus, though. 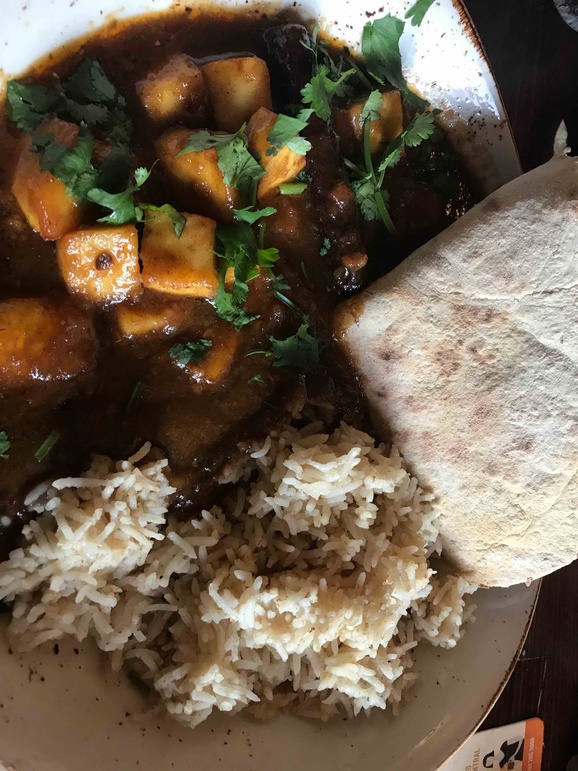 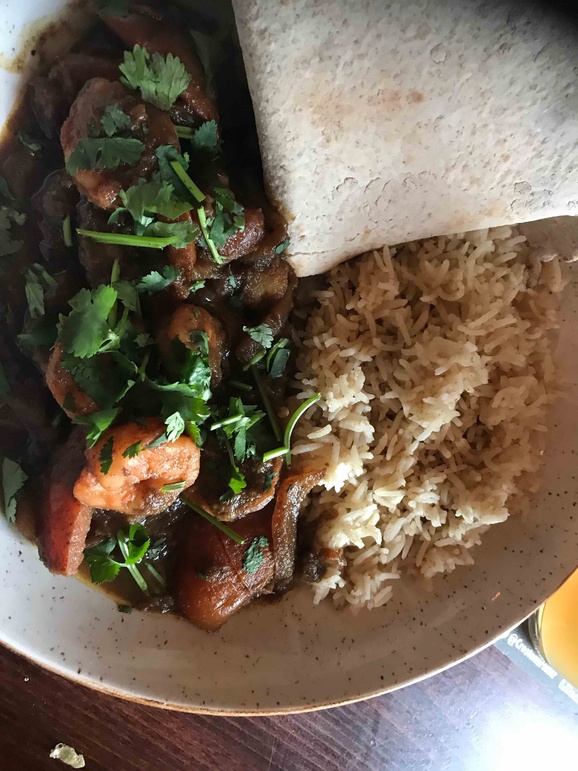 OK, I was warned my Paneer Kadai (£9) was sweet and cinnamon-centric. Well, that was the case, a three inch log of bark dominating its stewed sweetness. Perhaps cinammon is the new coriander? Dhaba is a Punjabi dish named after truck stop cafes you’d find on the Grand Trunk Road. Lots of onions and tomatoes, which suited a good helping of prawns in Bombay Brew’s £9 version. A notch up from that odd Kadai but one-dimensional. 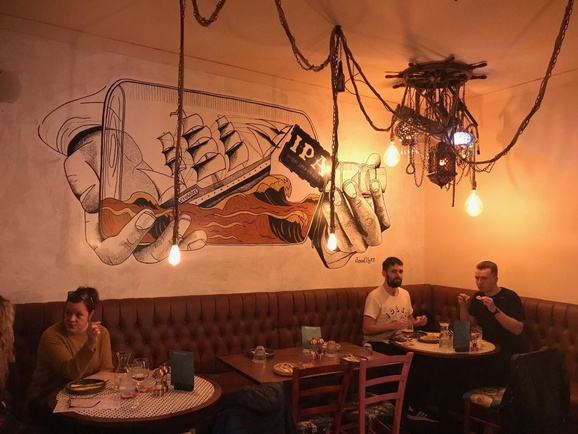 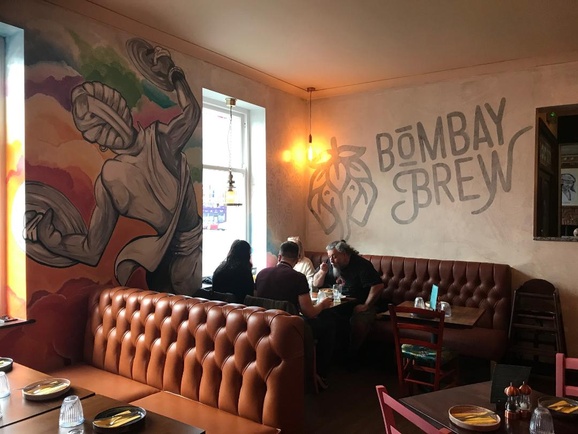 The revamp of the Wellington is far from one-dimensional. The two large dining areas are adorned with nautical murals commissioned from street artist Doodlher. Read her account here of how she was inspired by the ill-fated voyage of the Bombay-bound cargo ship Crusader out of Liverpool in January 1839. An unprecedented gale wrecked it on a sandbank. Among the goods salvaged were hogsheads of ‘India Ale’ brewed by Bass and Alsop’s.

I could be marooned in the Bombay Brew any day of the week. A real asset for all you Rochdale shipmates and beyond, but stick to the craft beer with a range of small plates as ballast. As you tackle the octopus yell: “Avast behind.” 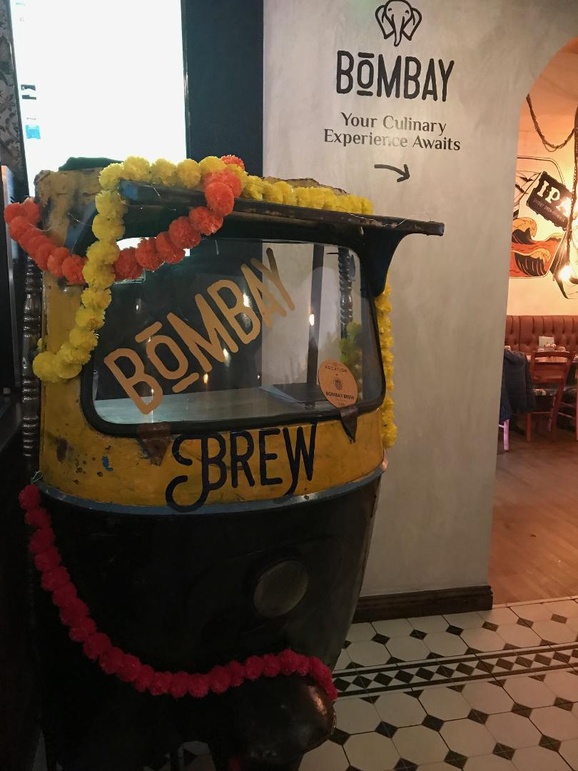 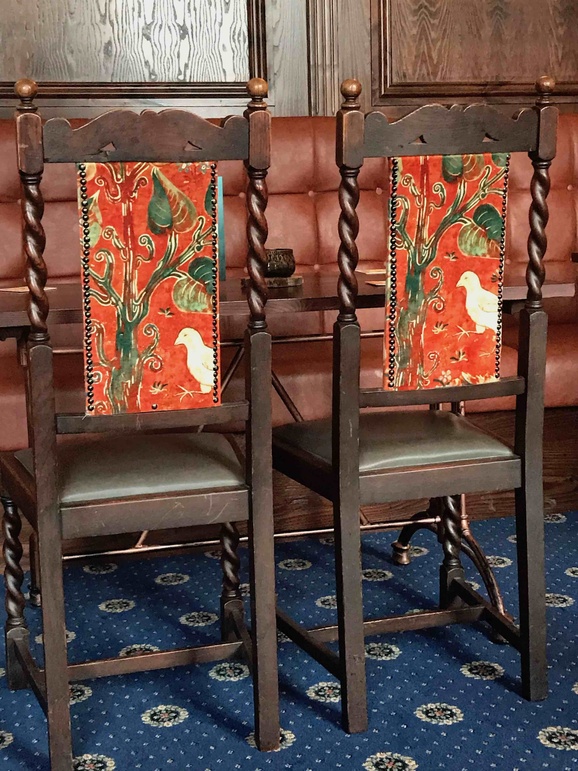