SPREAD the word – Michelin-starred Mana doesn’t have a monopoly on contemporary culinary wizardry in Ancoats. Yet inevitably it steals most of the thunder.

Close neighbour Erst refuses to prioritise the fascinations of Patrick Withington’s compact menu, modestly dubbing itself ‘natural wine bar and restaurant’, but each fresh visit reveals intriguing adventures in the kitchen and proof that low-intervention wines do transcend stereotypes. Purple haze can be a hit. 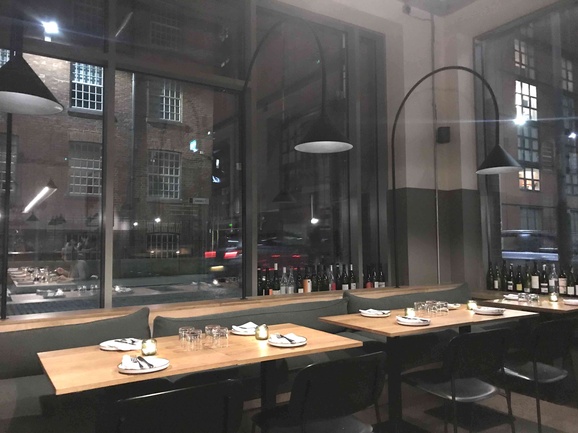 Mana, now mecca for gourmet guide completists from near and far, is invariably seen as its creator Simon Martin writ large. Not that he seeks any massage for his ego; he’s just high profile and obviously intense about his project (with team input, too, this is 2020).

In contrast, Erst feels more communal and laidback. And not just because they encourage you to pull up a stool at the bar for a pour of their latest discovery. You feel that chef patron Patrick and restaurant manager Will Sutton bounce ideas off each other – a habit developed working at Trove in Levenshulme, of which Erst is an offshoot. 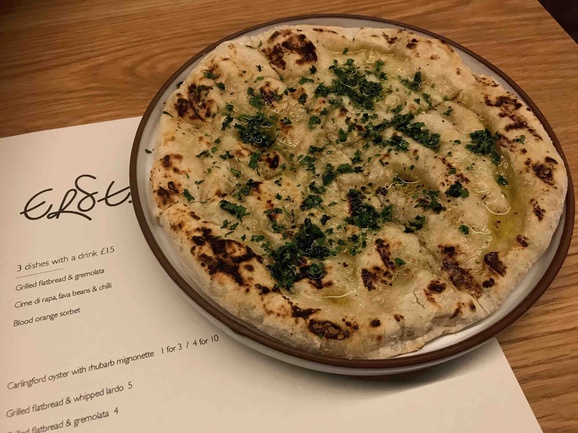 Patrick was a former plumber who swiftly rose to be head chef, Will a barista who found leftfield wine, craft beer and cocktails a natural progression front of house. From there foraging, fermenting and pickling was an obvious bond between them. There are a lot of jars bubbling on shelves at  Erst and a robata grill that is given no rest. So far so ‘today’, but their offering still has to taste the real deal– and it does.

Forgoing Carlingford oysters with rhubarb mignonette (we’re still asking ourselves why – there is apparently a case that oysters qualify for Veganuary) we nibbled the house flatbreads, grilled and doused with gremolata (olive oil, garlic, parsley). 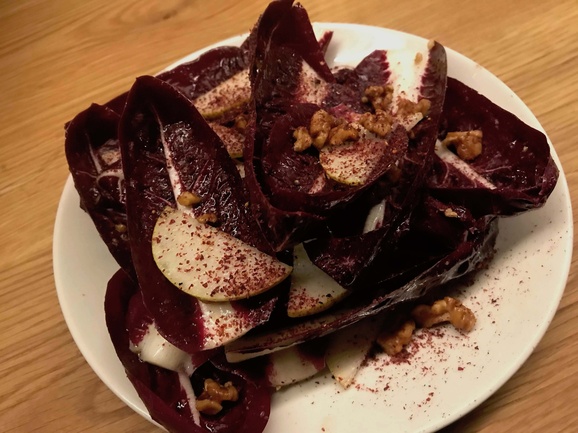 Our accompanying glasses of Vernaccia di San Gimignnano (£8.50) challenge preconceptions of what an aperitif white should be. Golden in colour, herby and medicinal on the nose, pear and apricot fruit, with a resinous mouthfeel, it came into its own with our next dish – a plate of bitter radicchio leaves and pear (£7.50) so intriguing we had to quiz Will about its components.

Why were the accompanying fresh walnuts so concentrated? Blanched and then deep fried. And what exactly is ‘cranberry sumac’ peppering the pear slices? They weren’t happy with the Middle Eastern original they were getting from importers. Air-drying and grinding our own native berries provides a more intense, peppery lemony seasoning. We can confirm this. 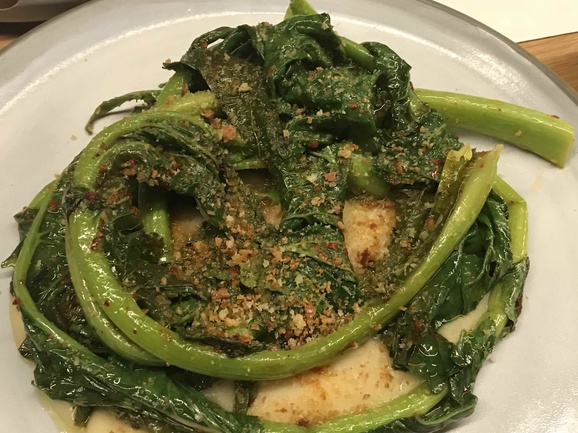 Equally bitter and exciting were coils of cime di rapa, the Italian winter green also known as turnip tips, served on a bed of fava bean puree with a dash of chilli. This is the main in the £15 meal offer – the veggie one, so that gremolata flatbread to start, a bitter orange sorbet to close. 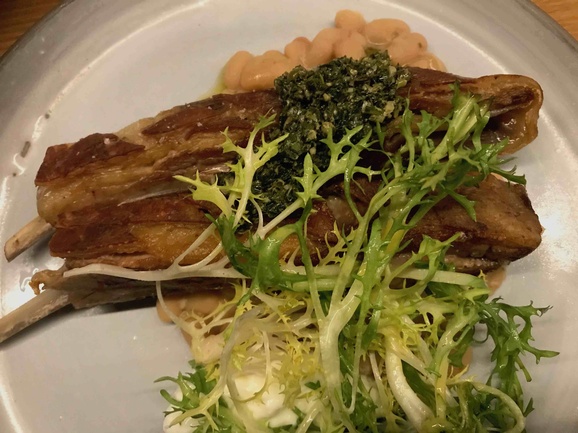 For meat eaters substitute lamb ribs and white beans for that main and your flatbread comes with lardo. Just for a fiver more. Each comes with a drink of choice. The  house Gruner Veltliner white or Zweigelt red are both excellent, making this a fine offer. A pat of sheep yoghurt and and a light green sauce added a beautiful subtlety to the lamb plate.

Back to the main menu and a new winter dish that was the star of the show. I last ate gnudi at The Spotted Pig in New York’s Greenwich Village (their version of Ancoats), where these little balls of fresh ricotta rolled in semolina flour are never off the menu. You treat them like their heavier spud-based cousins gnocchi, – shown boiling water and when they float to the surface you scoop them out and dress them essentially with butter, maybe a scattering of sage. They are fiddly to make. In her book, The Girl and Her Pig, chef/patron April Bloomfield lamented: “It’s been seven years of sheer hell making these little things.” 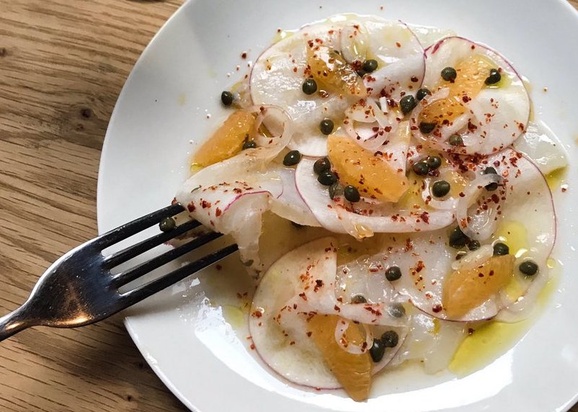 At Erst Patrick pairs them with braised leeks in an aromatic broth with thyme, parmesan and breadcrumbs (£10), yet they retain their fluffiness beautifully. And we’d always credited the salt cod with clementine, bergamot and wafer-thin turnip (above) as Erst’s best dish.

Ricotta, salted this time, mingles with capers around a delicate venison carpaccio (£12). The deer loin comes from Lyme Park, the rest of their meat from the excellent Littlewoods in Heaton Chapel. Such as the pork collar for our final dish (£10). 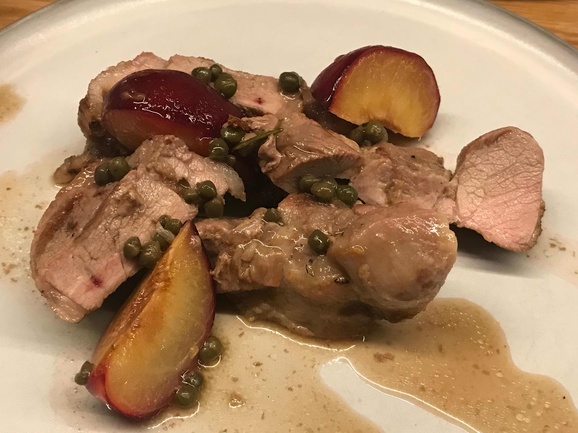 The combo of fish sauce, rosemary and tart plum was daring but worked but the collar, a shoulder cut, was over-cooked and dry. The one disappointment in a meal that for us establishes Erst as a major player, albeit in a minor key of its own making.