THE fate of the nation in the balance. So where else to go out for dinner on Election Night than that bastion of capitalism, the former Stock Exchange? The brokers’ ghosts looking down may be Tory to the core but current incumbent Tom Kerridge is a Man of the People writ large.

Hence for some Twitterati the elephant in the dining room at The Bull & Bear is the plethora of telly screens dotting the Edwardian splendour of the old trading floor. Mercifully not showing political pundits brandishing exit polls – just helpings of silent football action.

Maybe Arsenal’s Europa League fightback against Standard Liege did on occasion divert me from the end to end action of exec chef Dan Scott and his team in the open kitchen (we were in the front row ‘dug-out’ of the chef’s counter seats). 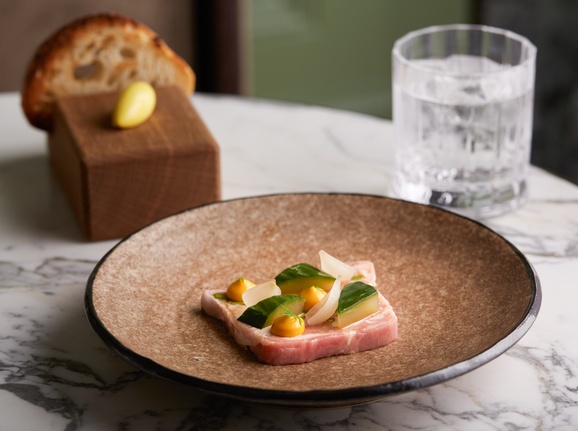 But when the food kicked off it captured all our attention. Indeed we were almost ready to demand action replays of the Whole Stuffed Rotisserie Quail with Black Pudding and Moilee Sauce (£17.50) and the Cassoulet of Tarbais Beans with Roasted Vegetables, Cepes and Winter Truffle (£13.50). Stunning dishes, the product of impeccable kitchen skills but not flaunting it. Similarly the most delicate of terrines (above) made a beautiful first impression. 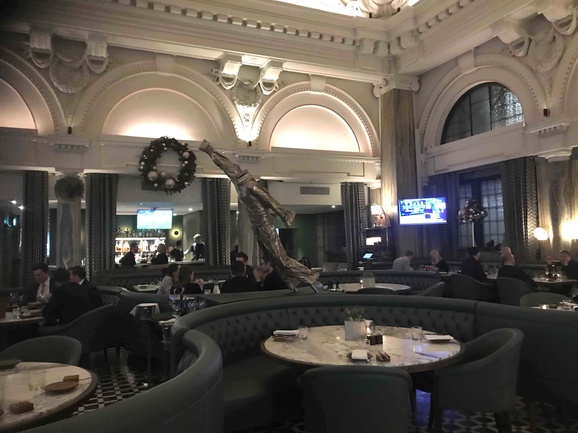 Kerridge’s mantra across his food pubs is ‘Refined British classic comfort food’ and he delivers that at the heart of a listed building transformed into a luxury Relais & Chateaux hotel with room prices to match. Ok, there are signs of bling – an astronomical price on a special adding Oscietra caviar and creme fraiche to a Baked Red King Edward (£74 to share) and a wine list with some  Bordeaux and Burgundy big hitters in there.

Still most dish prices hover between nine quid and the mid-teens. They advise ordering three each plus sides. I defy anyone not to adore the benchmark chips with addictive gherkin ketchup for £5.50 a tankard. 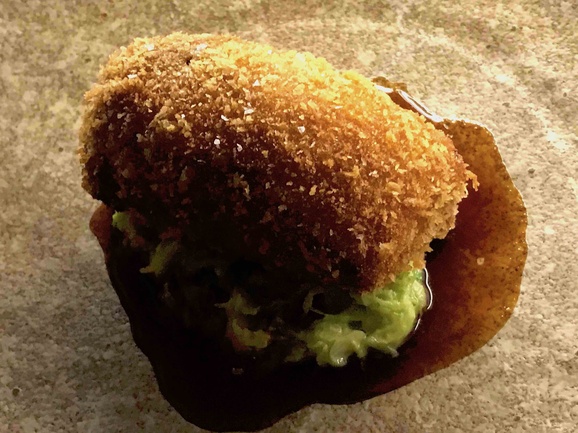 The plan was finally, on this return visit, to tackle the £14.50 Chicken Kiev with maple syrup butternut squash that is almost a Kerridge trademark, but instead we succumbed to the allure of a pheasant version off the specials, oozing garlic and seasonally accompanied by ultra-refined creamed brussel sprouts. 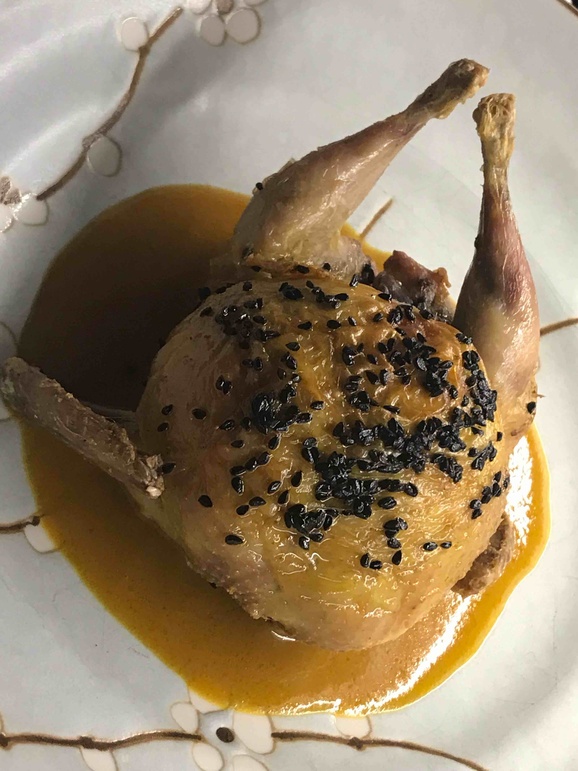 It was seriously satisfying but eclipsed by the rotisserie quail. Down in Marlow, Bucks, at Kerridge’s second pub, The Coach (inspiration for the B&B) this comes stuffed with haggis;  here in concession to Up North it’s black pudding. Whatever, the coconutty  Keralan-influenced moilee sauce donates real magic to the surprisingly substantial bird.

The bearded former Galvins group executive chef is in the room tonight casting a perfectionist eye over proceedings. Scott, his sous chefs and the servers all step up to the plate. 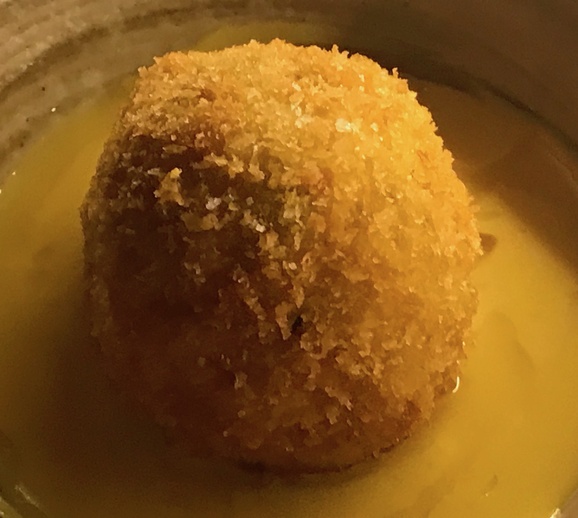 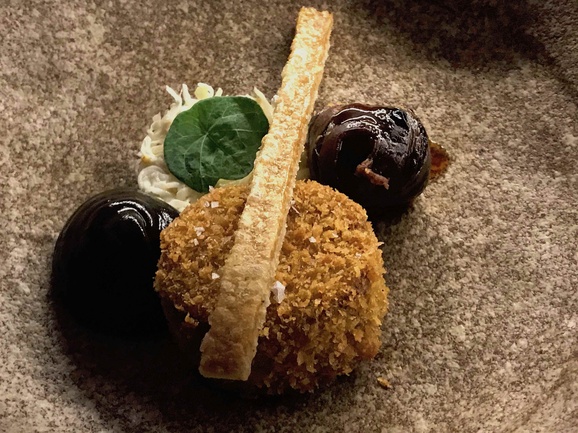 Attention to detail is apparent across the dishes that arrive – to quote Theresa May (vaguely remember her?) – in an orderly fashion. An intense bisque adds shellfish oomph to the delicate pollock encasing a quail’s egg for a superior twist on a Scotch egg (£9.50).

Deep-frying can be the greasy bane of a critic’s life, but this kitchen gets it spot on with a Crispy Pig’s Head for the same price. Celeriac Remoulade and Spiced Date Sauce accompany, simple and satisfying as the rest. 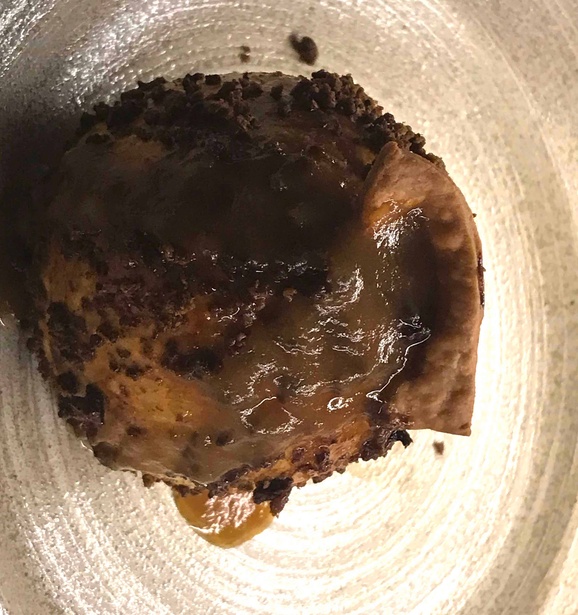 Posh pub grub grappler, though, has to be Steak and Blue Cheese ‘Demi’ Pie with Roasted Onion and Ale Gravy (£14.50), unctuous dairy and slow-braised beef inside an half suety casing. It went perfectly with our Madiran Bouscasse. This sturdy Tannat red from South West France with over a decade’s bottle age probably needed more time to open up on the night even after decanting, but still proof of a wine list that's a real contender. 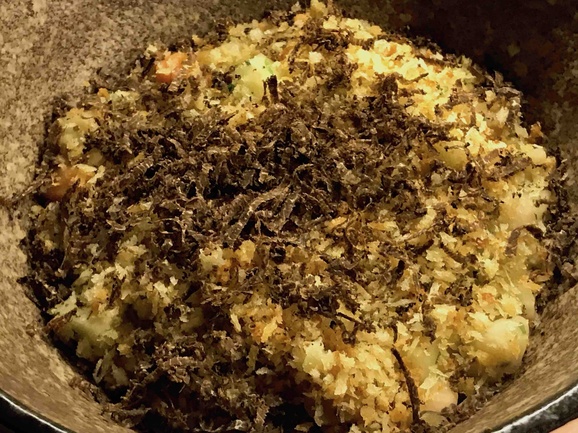 The presence of winter truffle in a couple of dishes, a side and a main, signals fleetingly the Michelin star backdrop of the operation (one at the Coach, two at the Hand and Flowers). It's such a relief really when Kerridge insists a fourth is not the aim at the Bull & Bear.

The tuber’s aromatic presence is more obvious in Rotisserie Celeriac with Winter Truffle (£4.50). In a ‘Cassoulet’ of Tarbais Beans with Roasted Vegetables, Cepes and Winter Truffle (£13.50) it is battling with other earthy flavours. A revelatory veggie take on a carnivore classic, mind. 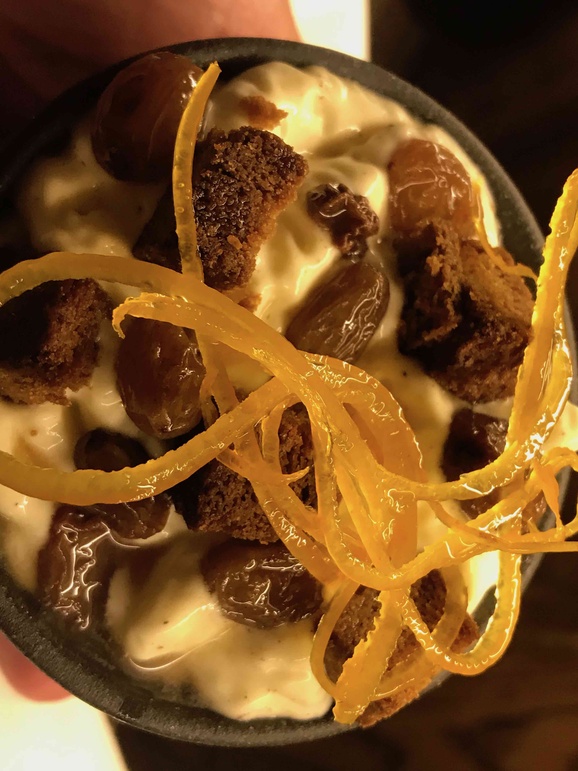 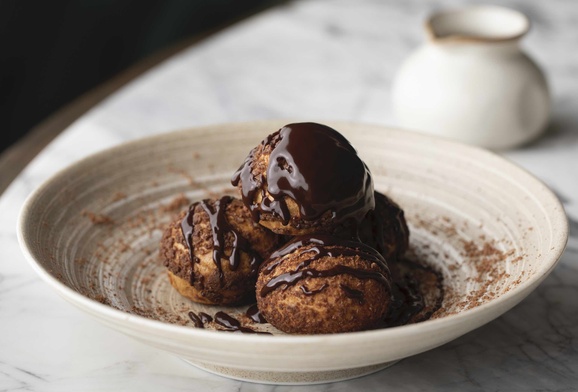 Sticky toffee pudding is the dessert list clarion call, but a Nutmeg Fool with Plum Pudding Ice Cream (£8.50) was equally  irresistible – an almost triflelike tangle of flavours. Profiteroles with Soured Vanilla Cream (£8.50), was perhaps the only disappointment  on the night (apart from Labour being crushed). Didn’t enjoy the texture of the shell or the fierce salt caramel feel to the sauce.

Still The Bull & Bear is a remarkable antidote to a divided nation in despair. We even hve no issue with the tellies. Book us in again please, Tom, but promise you’ll put on the World Darts from the Ally Pally.