Co-owners Kirsty McAlpine and Alex Moreau have pulled out all the stops with their glittering patisserie and bakery in the heart of Didsbury Village. 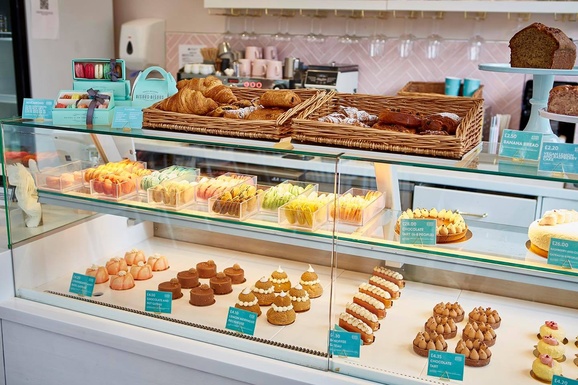 They were so successful, they opened another patisserie café in Chorlton, followed by a shop on Deansgate and concessions in Selfridges Manchester and Birmingham.

The name means ‘little kiss’ which is fitting for their premium macarons, baguettes, croissants and gateaux which have convinced locals (and a wide range of restaurants) that it's definitely worth paying that little extra for such quality.

The café is open for hot and cold drinks, milkshakes, smoothies and even a cheeky glass of wine or beer. You can order all day brunch items such as freshly baked plain or almond croissants, pain au chocolate or pain aux raisin, quiches or filled baguettes, but it's the sweet stuff that most people come for.

Choose from picture perfect viennoiserie, including eclairs, tarts and gateaux, brightly coloured macarons, cakes, tea loaves and brownies. they have even developed a few vegan variations.