Full flavours and culinary cabaret as Carnival comes to town

Escape to Freight Island, just a stone’s throw away from Piccadilly Train Station, might not be everyone’s cup of tea. It’s a crazy, loud and colourful space that can make you feel you’re eating your dinner in a tumble dryer full of circus costumes.

There’s a vast outside area to enjoy during Manchester’s handful of sunny days and a huge, cavernous interior that’s home to an eclectic mix of DJs and performers. In winter there’s an ice rink on the mezzanine and a brand-new roller skate rink, Good Life Skates, is coming this Spring. 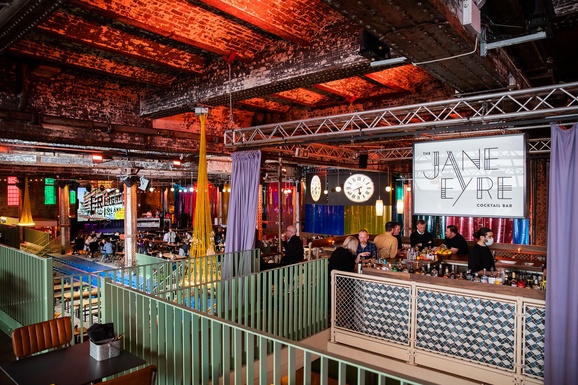 Escape to Freight Island (ETFI) is also home to a number of really talented independent food traders and bars, which come and go to keep the energy up and the offering fresh. While One Star Doner Bar, Mi & Pho, Voodoo Rays, and Madre are staying, the new spring line-up will include Burgerism (replacing Patty Queen mid-May), Batard’s new American pie bakehouse and Gooey bakery (replacing Choo Choo and Soft Boi.) And there’ll also be a brand-new deep fried and charcoal grilled chicken concept, Lucky Foot, from the team behind Liverpool’s Belzan. 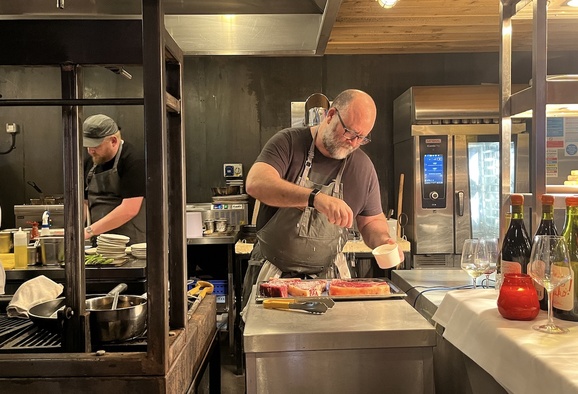 The fluidity of the space is ripe for creativity and book now or you’ll miss ‘em pop ups. The latest is new grill venture, Carnival (replacing Baratxuri), a collaboration with chef turned butcher Richard Turner, who has been a key player behind some of the best grill restaurants in the country including Hawksmoor, Pitt Cue Co, Foxlow and Blacklock. He also brought the annual Meatopia Festival to London to celebrate his passion for ethically sourced meat and barbecue.

In the book, Hawksmoor Restaurants and Recipes, Richard admits to previously having been ‘a Michelin junky, working at a succession of 3-star restaurants’ including Le Gavroche, Harvey’s and The Restaurant Marco Pierre White ‘until a couple of lunches completely changed the course of my career.’

A simple nose to tail experience at St John swiftly followed by a Turkish grill at Ocakbasi 2000 lead him to understand that it wasn’t all about fancy saucing and garnishes. What really floated his boat was simplicity, great quality ingredients and charcoal. And that’s what Richard has devoted his life to ever since.

He opened Turner & George, a meat merchants in Angel, London, with butcher James George, supplying ethically reared meat using traditional butchering methods. They source from British native breeds reared on independent farms and smallholdings, free from growth hormones, antibiotics or cruelty, all dry-aged in house on the bone for flavour. 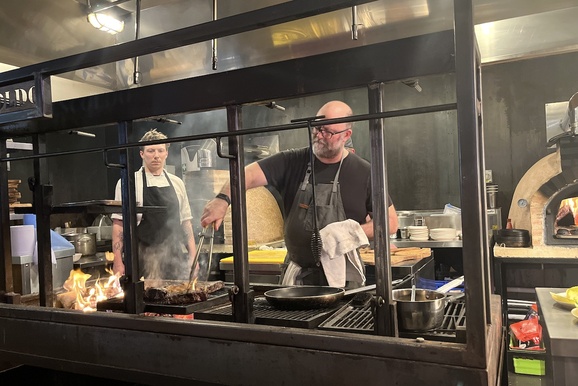 Through a friend of a friend of the team behind Escape to Freight Island, he was invited to bring his meat-based magic to Manchester. He has helped created the concept and the dishes for Carnival in collaboration with chefs Sam Grainger and Chris Edwards from Madre who have been part of ETFI, offering tacos as part of a two-year residency. They also own Liverpool’s highly acclaimed Belzan bistro and are currently working on bringing a new Mexican taqueria and mezcaleria to the Kampus neighbourhood in May.

They’re all busy boys and this is a dream team. 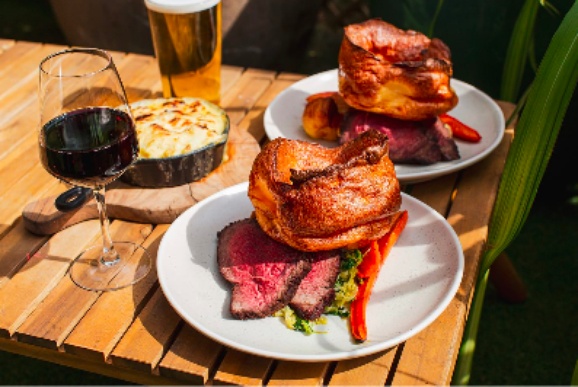 Using the best meat from a single producer farm, Carnival’s grill menu will feature fine cuts of premium rib, porterhouse and T-bone steak, as well as smoked beef short ribs and pork chop with apple tamarind ketchup. You can order steaks, shellfish, and other delightful stuff any time from their general menu via the ETFI app. Carnival are also offering a weekly Sunday Roast (12-6pm) which is available now at £19, or £25 for two-courses and £30 for three-courses. For those with big appetites, ‘THE BEAST’ Porterhouse or T-Bone roasts is available for minimum of two people sharing and priced at £20pp. 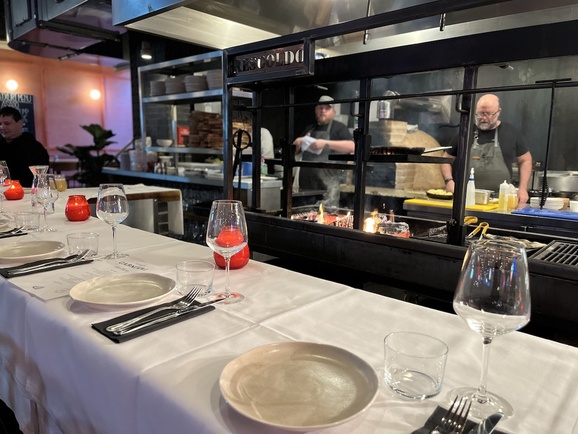 What we recommend is the exclusive front row seat tasting menu - designed by Richard Turner and brought to you by Sam, Chris and team. This experience will launch on Friday 29th April and will run Fridays and Saturday evenings with two sittings for up to 12 guests - 6pm or 8:30pm. This chef’s table offers a mesmerising view of the grill, an evolving set menu for £85pp - and they’re likely to throw in a few extras on the night. This comes with a wine list made up of their favourite low intervention wines, alongside some iconic names and bottles. 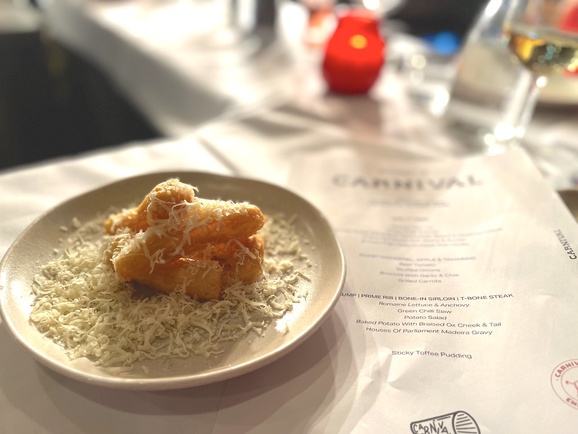 We went to try it out on a pre-launch press night and were totally swept away by the spectacle and the standard of dishes. Chris Edwards is a natural host bringing over course after course packed with flavour, each one arguably better than the last. 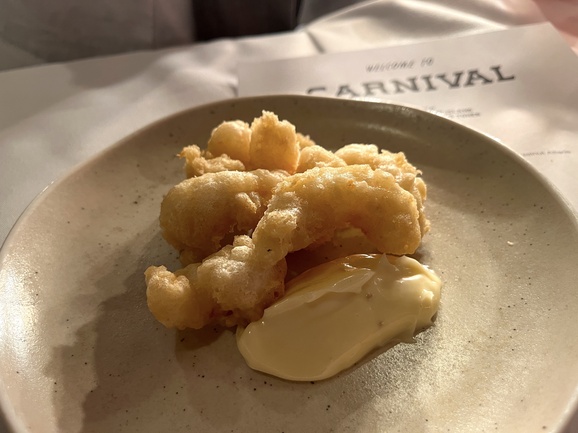 It’s not ALL meat. We started with cheese churros, piping hot from the fryer and liberally scattered with grated aged Parmesan, followed by crispy fried scampi (langoustine tail and squid) with roast garlic aioli. 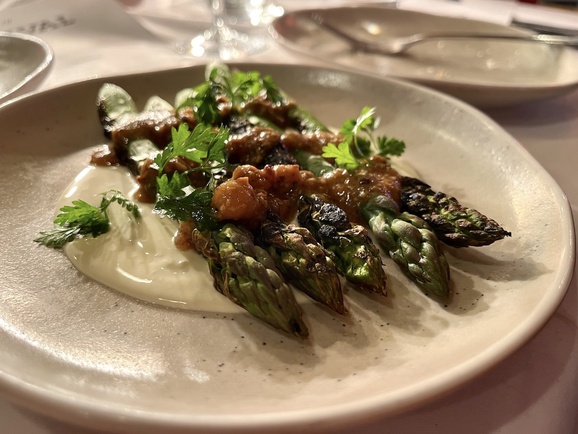 The next course showed how charcoal makes veg shine as much as meat – fresh fat stems of local asparagus dressed in horseradish sauce and a toasted hazelnut aillode. After that, chargrilled squid and deep-fried tentacles served with rocket and kosho, an incredibly perky Japanese fermented condiment made with chilli and citrus peel. 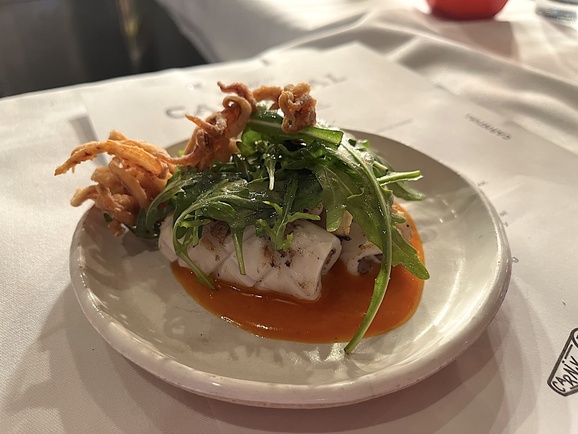 All the while you can see Richard and the team at various stages of preparation behind the scenes; salting, grilling, turning and resting giant steaks the background like a carnivorous cabaret. 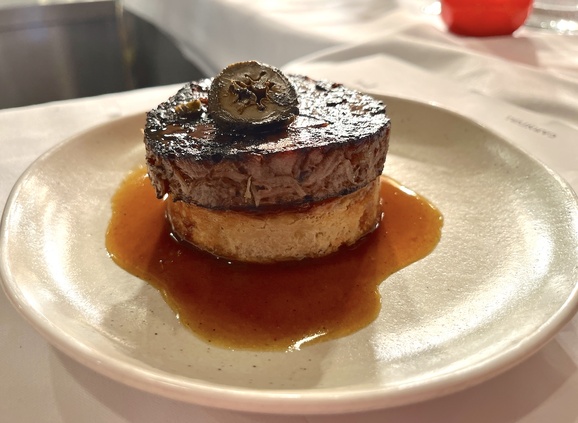 Next, a miles-better-than-it-sounds pig’s head crumpet infused with aromatic cloves and a bit of honey to balance out all that base meatiness. It was like a cross between the best pulled pork you’ve ever had and properly made country paté. 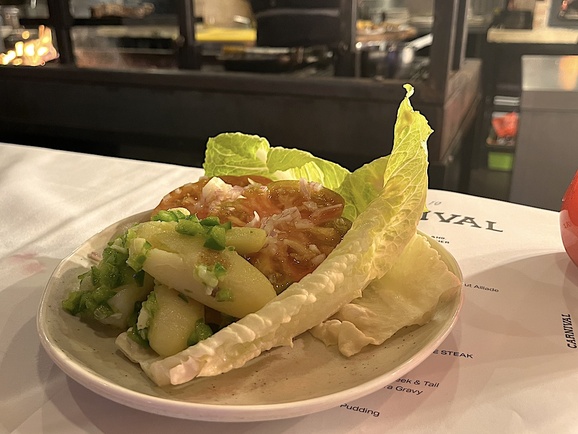 Time for the main event. A chorus line of crisp fresh Romaine lettuce was laid before us with huge slices of beef tomato, plus boiled and dressed Ratte potatoes. But they were only the cold side dishes. 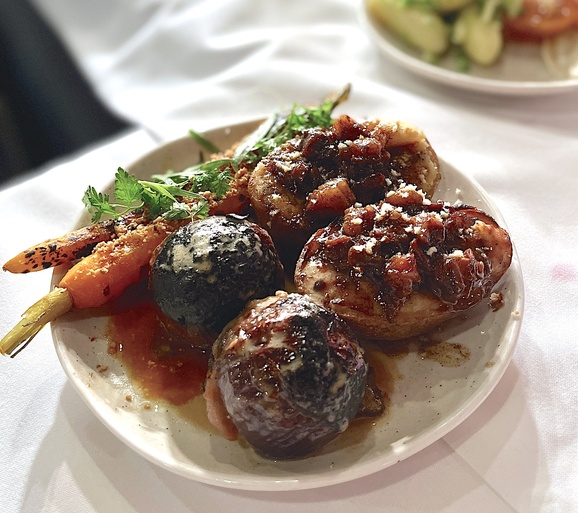 Hot on their tails were whole carrots straight from the grill, roasted onions stuffed with sausage meat and an incredibly rich baked potato half stuffed with braised ox cheek and tail (to which you can add caviar for a supplement). 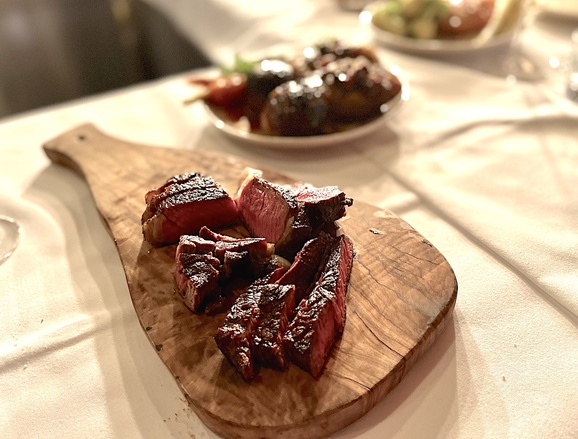 We were starting to wonder whether they were trying to kill us with delicious food, but then we realised there was probably no better way to go, so we ploughed on as the steaks arrived, trying a piece of each cut as the wooden board was passed around. These guys are pathological feeders, so they decided to finish us off with sticky toffee pudding, toffee sauce and clotted cream. 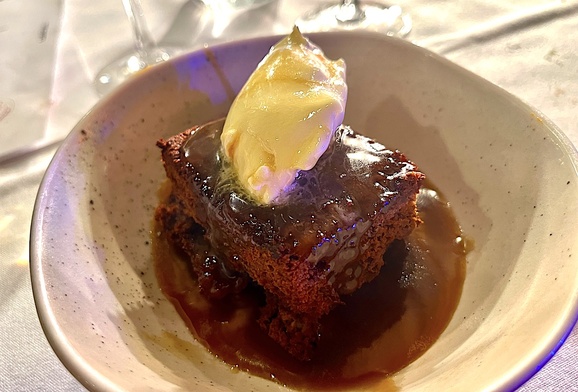 What an experience. Truly incredible food, produce with impeccable prominence, a team of hugely talented and experienced chefs, a fringe theatre setting and a roaring fire. We would have given them a standing ovation – if only we could have managed to stand after all that lot.

Carnival’s tasting menu is available every Friday and Saturday. Bookings for the Front Row Seats are open now. Reservations for parties of 2-12 people can be booked through resdiary.com, and they keep some space for walk-ins.