What to order – Campagna at The Creameries

Chorlton has a new neighbourhood bistro. Well, it’s new but not exactly *new*. Let’s recap. At the end of 2021, Chef and owner of The Creameries, Mary Ellen McTague, decided to drop the tasting menus. She realised that The Creameries was becoming known as more of an ‘occasion’ restaurant where people would go for ‘special meals’ like birthdays, anniversaries and date nights. 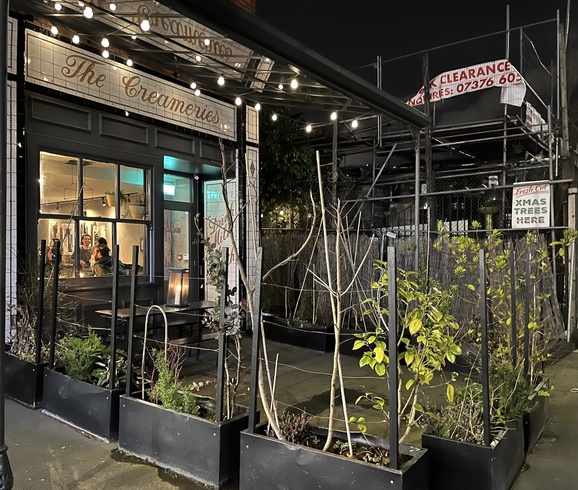 It wasn’t an ideal business model, but how could The Creameries get punters in during the week? Enter head chef Mike Thomas, an experienced and diligent chef who shared McTague’s ethos of using fresh, seasonal, locally sourced ingredients and turning them into delicious dishes. 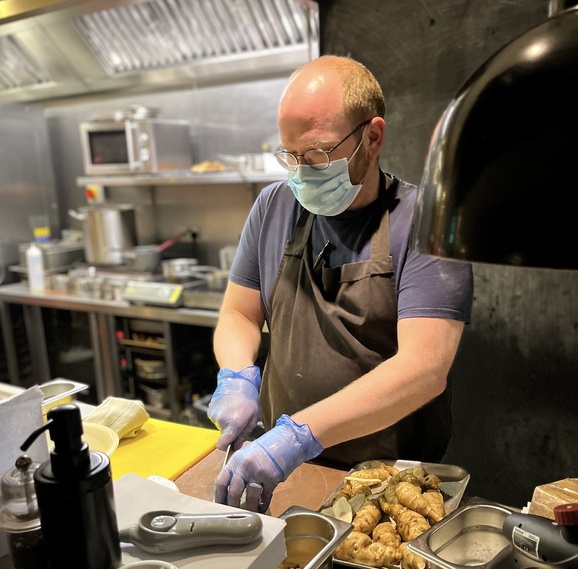 For the last few years Mike has been running Umbra Food, a roving supper club around Manchester where he specialises in recreating dishes of Southern Europe with an emphasis on regional Italian cuisine with touches of France here and there. He has also worked stints in notable London restaurants with a similar offering such as Bright, Rochelle Canteen and Leroy, as well as Stockport’s Where the Light Gets In, and a couple of years at Honest Crust honing his dough making techniques. 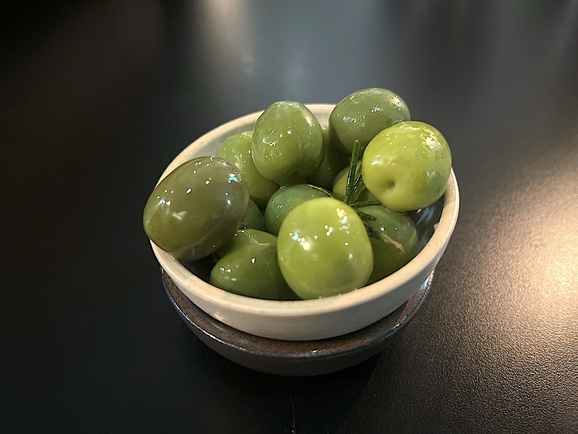 Together, they decided to rebrand The Creameries as ‘Campagna at the Creameries’ and open Thursday-Sunday as a more casual neighbourhood bistro and wine bar (with interesting low intervention wines sourced by Kimberly McBride). Read more about it HERE. 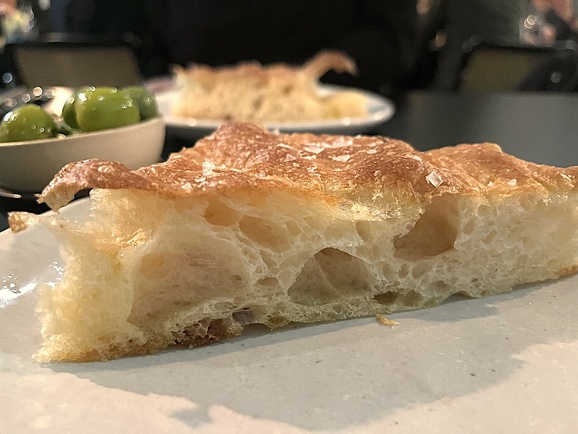 The idea is that customers can pop in, order some wine, graze on some marinated olives, freshly made focaccia or panisse with rosemary and salt (delicious chickpea flour fries) and make the space their own while they’re there. 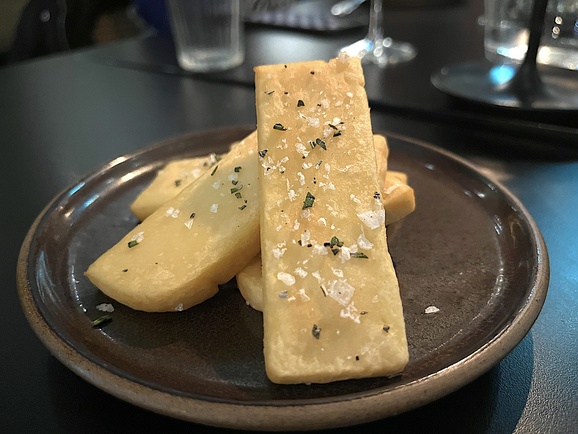 If that’s all they’re after, no problem, but if they want to eat, there’s a small menu chalked up on the blackboard listing the available choices which fall under (currently winter) salads, pasta, mains and desserts. It’s supposed to be rustic and more accessible but, as you’d expect, quality is still high, dishes are exceptionally well considered, and ingredients are fresh and at their seasonal peak. 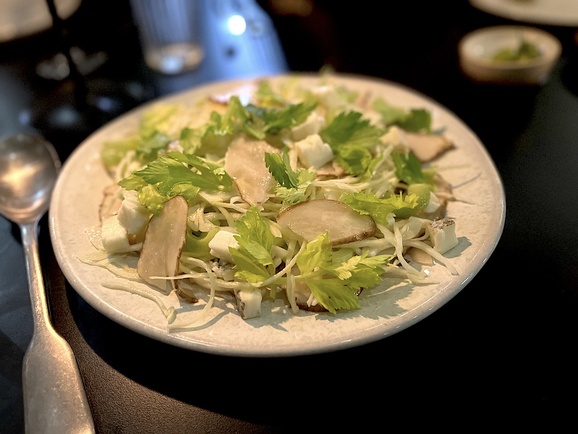 What I enjoyed was the element of surprise. How Mike manages to get the best out the available ingredient whilst holding onto the element of simplicity. My favourite dish (and the one I’d return for) was Jerusalem artichoke salad with shredded cabbage, Yorkshire Pecorino and truffle oil – the scent of which introduces itself first. I grow these knobbly veg but it had never occurred to me to slice them thinly and serve them raw before. 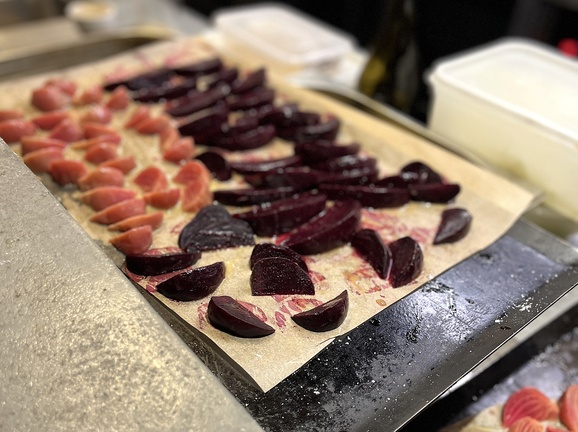 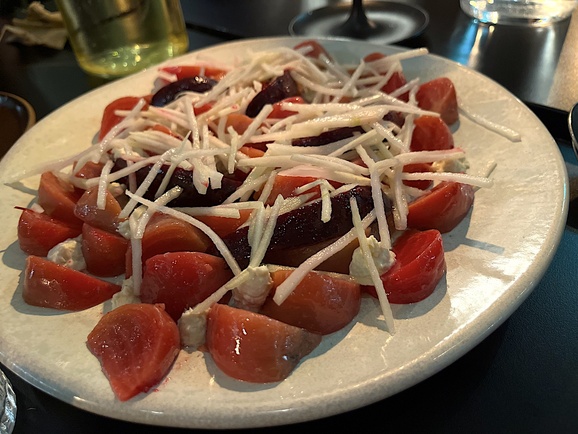 Candy beetroot, roasted to the peak of releasing its sweet earthiness, was served simply with cold weather companions, kohlrabi, apple and a hint of horseradish. 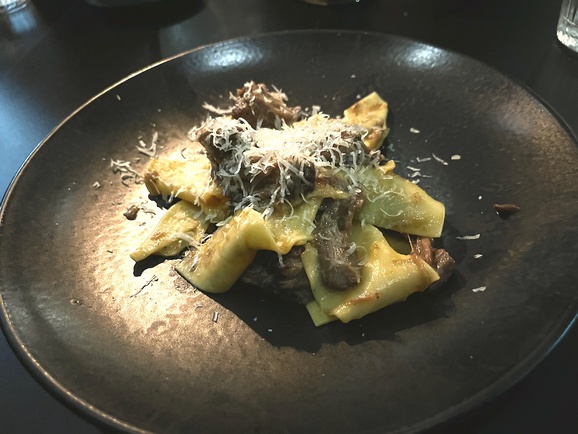 If you want something more comforting, Mike prepares fresh pasta every day. Currently there’s the vegetarian fazzoletti with walnut salsa or pappardelle with beef ragu – likely to become a menu staple. Campagna’s ragu is different to say, Bolgnese sauce. It’s made with one of the cuts more suited to very slow cooking like shin beef, brisket or short rib until it falls off the bone. There’s no tomato in this ragu, it’s more like a lighter but comforting gravy which gets soaked up by the silky pasta ribbons. 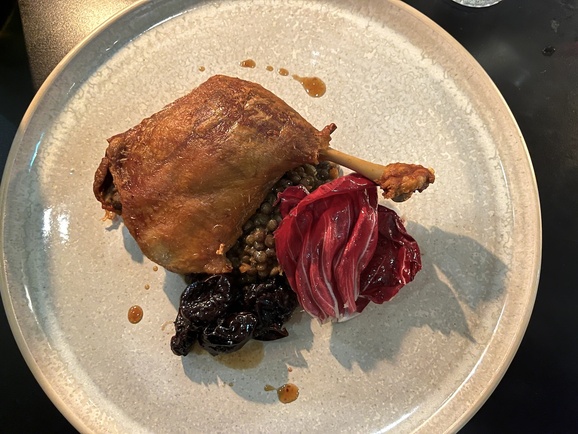 Again, you could leave it there, but there’s a choice of main courses to follow (or head straight to) if you’re out for a proper feed. This time there’s a choice of three; meat or fish and vegan. The plant-based option being braised fennel with chickpeas and rouille and the fish being a similar dish substituting the fennel for clams instead. We enjoyed a generously plump confit duck leg with braised puy lentils, salted radiccio leaves and prunes. 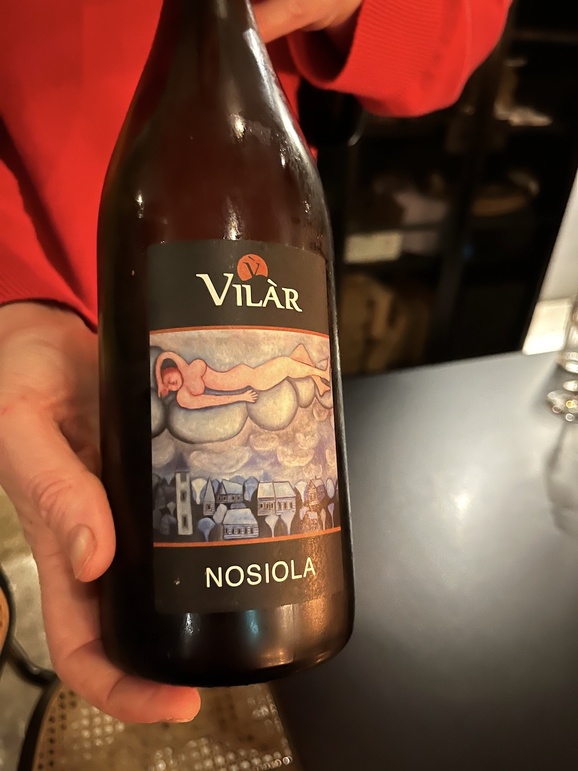 If you want to pop in for a dessert or a bit of cheese and wine, you’d be welcome. We recommend the light but delicious hazelnut torte served with zabaglione, but if you have more of a savoury tooth, enjoy a well ripened gorgonzola dolce with quince.

Pasta dishes start from £10 (portions will be larger than pictured as we were there to try a bit of everything.) Starters, salads and desserts are priced between £7 to £14; and they’ll offer three courses for £30 on Sundays with something ‘al forno’ (a big family style baked dish) on the menu. 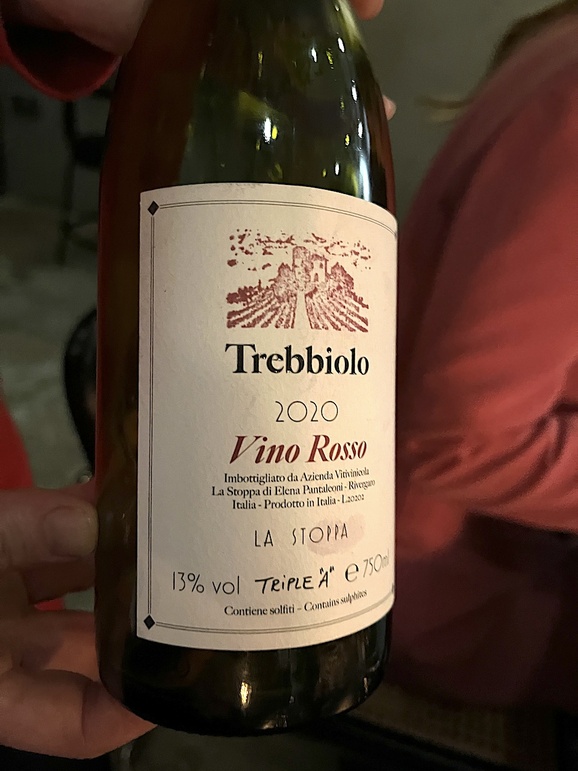 This new incarnation of The Creameries gives Mary Ellen McTague the chance to take a step back and be more ‘owner’, but just less hands-on. “I’ve been meaning to step back for a while,” she tells me. “But I’ve never got round to it… I really mean it this time.”

Mary Ellen now intends to keep only the one eye on the business while leaving it in the more than capable hands of the team. She intends to do some consulting work (she spent four years spent working with Heston Blumenthal, firstly as Sous Chef at the 3 Michelin-starred Fat Duck, then as Research and Development Chef, working on historical food for the Hinds Head and Fat Duck menus.) She also plans to do some writing and enjoy some quality time with her two children. And, after spending lockdown setting up the Eat Well Mcr charity and relentlessly rallying the troups to help provide thousands of meals for busy NHS staff and the vulnerable, she deserves some time to herself.