While the hospitality industry was crashing down over lockdown, some chefs got creative and used the time to improve their skills, refine their dishes and create new concepts. When restaurants re-opened, a few were not what they once were. They were better.

Simon Wood utilised the newly built terrace outside his restaurant on First Street back in April 2021 for a taco and tequila pop up incorporating his own signature Devil’s Tongue hot sauce and home fermented chilli. Behind the scenes, he was deep in dish development. 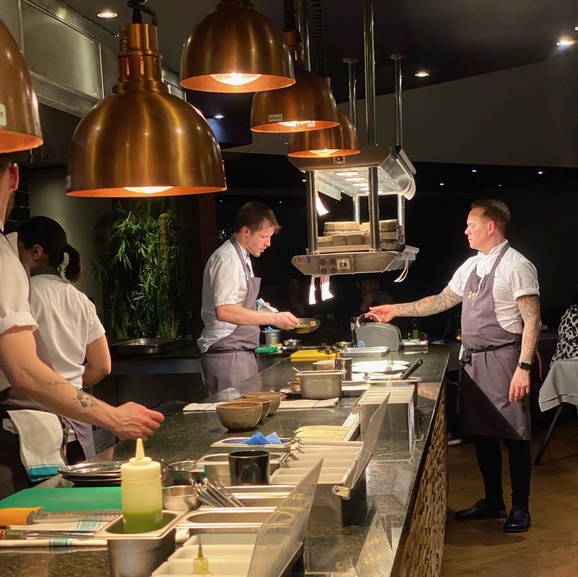 At the time Wood told us how excited he was to re-open properly. “We’ve really stepped things up during lockdown,” he said. “We’ve worked hard over the last ten months or so developing brand new tasting menus…I want to make it what I want it to be now we’re bold enough to stand up and fit where we want to fit.”

Where he wants to fit is within Manchester’s fine dining restaurant scene up against the likes of Adam Reid at the French and, dare he even dream? Manchester’s only Michelin starred restaurant, Mana. 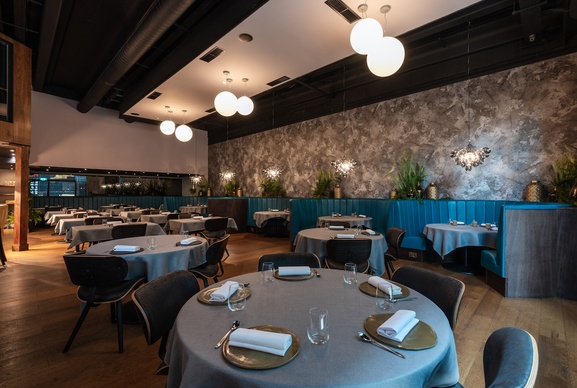 Wood has now done away with a la carte menus, lowered the number of covers, reduced opening hours and has created a refined seven-course lunch (£75) and a nine-course evening tasting menu (£105.) He’s introduced grey linen tablecloths, hand-made ceramic dishes, and a softer acoustic soundtrack. The kitchen team are also more involved, and the chefs take turns bringing each course over to the table.

But the food, that’s what we’re here for, is it any good? You bet your life it is.

Who’d have thought he had it in him? Well Simon, obviously. And TV’s Greg and John who crowned him Masterchef Champion in 2015. But it’s 2022 and Simon Wood has gained the confidence not to lean on that as a reference for his abilities. 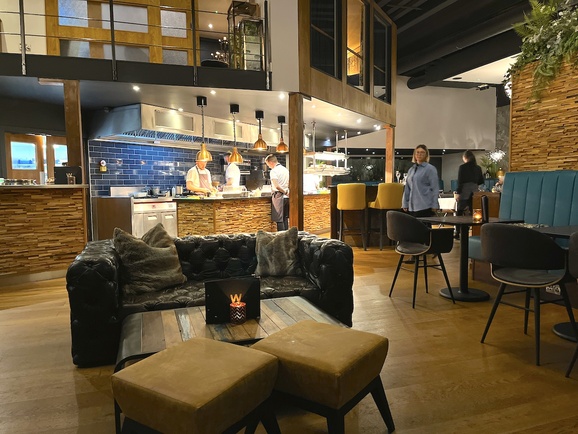 Diners are first seated in the candlelit bar area where menus are presented in a black envelope with a gold embossed seal to lay the foundation for a sense of occasion. This doesn’t equate to pretentiousness. Simon’s always regarded accessibility as a priority. He’s still a down-to-earth Oldham lad at heart. 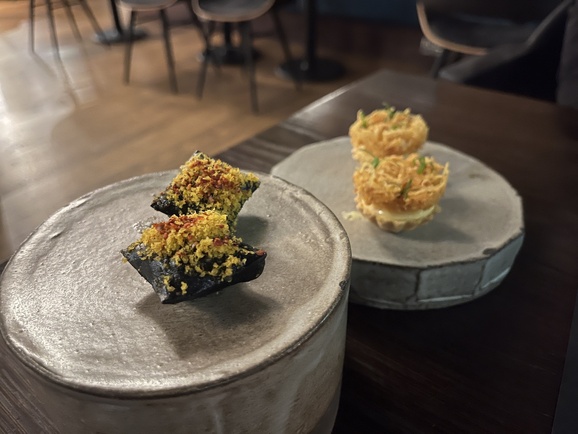 Simon brought over some bar snacks while head sommelier and general manager James Cameron poured the Piper Heidsieck. The canapés made us realise how Wood really has raised his game. A bite-sized tart made from 'Owd Yonner cheese and Roscoff onions topped with a salted potato basket (a Yonner is the colloquial term for someone from Oldham, as in ‘up yonder’.)

“It’s supposed to taste like Walker’s cheese and onion,” said Simon with a cheeky grin. “They’re my favourite crisps.” His roots are firmly Mancunian and run through the menu via local produce, traditional touches, and a sense of humour. The other snack was a pop-in-the-mouth charcoal pillow stuffed with smoked eel and topped with mullet roe. The last time I had something like that was at the two-starred Moor Hall. 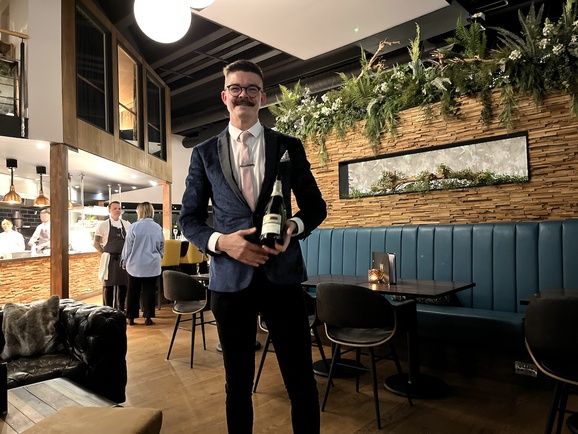 We were led to our table where a series of perfectly paced dishes kept heading in our direction. James (and assistant sommelier Charlie Walsh who used to work at Manchester House) offer seasonal (£60) and classic wine pairings (£85) which are an adventure in themselves. The seasonal wine flight took us as far as Kefalonia, Spain, Armenia and Israel, with dark rosé from rebellious Australian wine makers, to sweet black muscat from California. 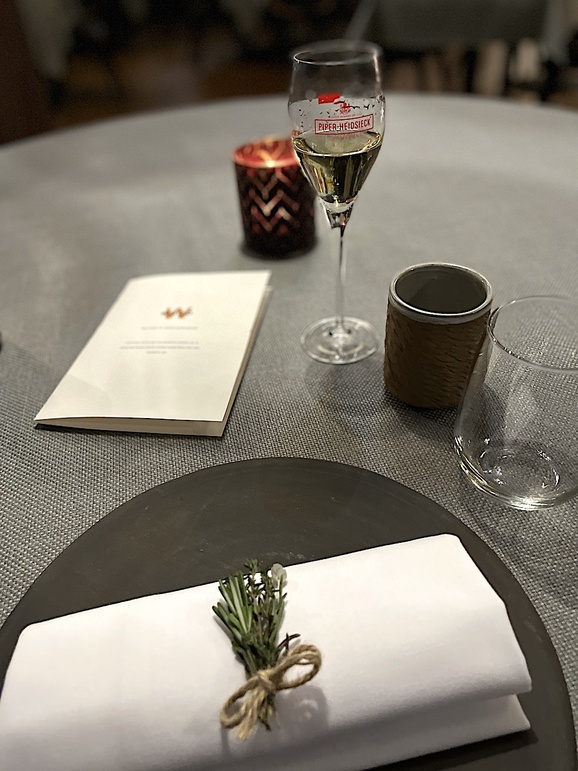 Our dining adventure began with our server pouring us a cup of deliciously intense mushroom koji tea with instructions to pop the bouquet garni, which served as a table decoration, into the cup to infuse. 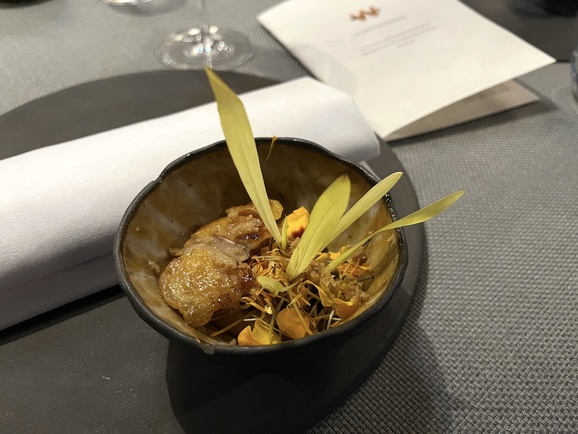 Next was ‘The Best Bit of The Chicken with Cured Lamb and Mushrooms’ – the chicken oyster with fermented sweetcorn supported by an undercurrent of deep lamby flavours. He’s captured the intensity of the scrapings of a roasting pan on a Sunday afternoon – surely that’s what he means by ‘the best bit’. 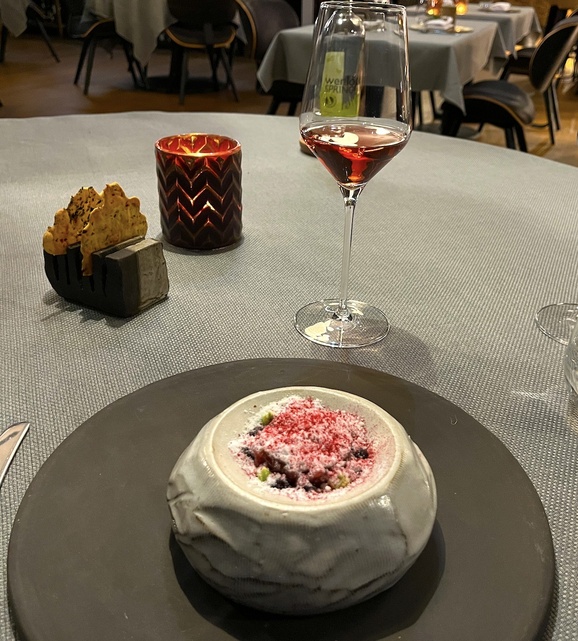 After this came slices of Orkney scallop with sea vegetables which your spoon had to dive for underneath a light green foam. Then ‘Leg of Cornish Lamb’ tartare in a slightly sweet jelly and a scattering of beetroot powder. The idea is to scrape up all the delicious lamby jammy stuff with a home-made cracker. 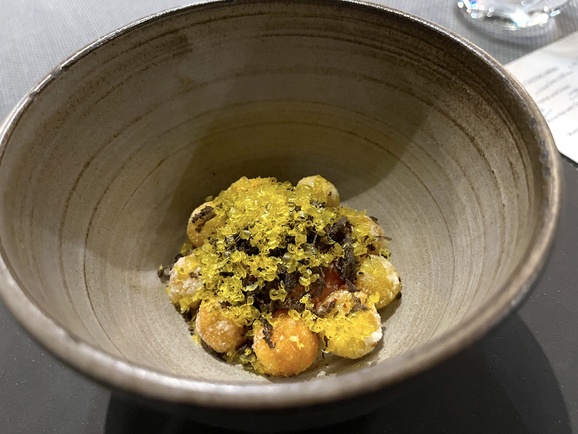 Simon’s signature dish - Hen’s Egg with Truffled Chips and Ham was next where the potatoes are pommes Parisiennes (that’s balls to you and me) fried in lardo from Porcus up in Todmorden, surrounding a precisely timed free range Arlington White Cacklebean egg yolk. He’s not forgotten the vinegar which, from far as I could tell (I was five wines in by then) came in the form of a powdered dusting. 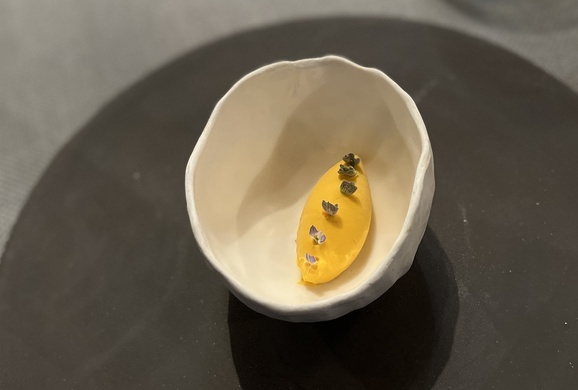 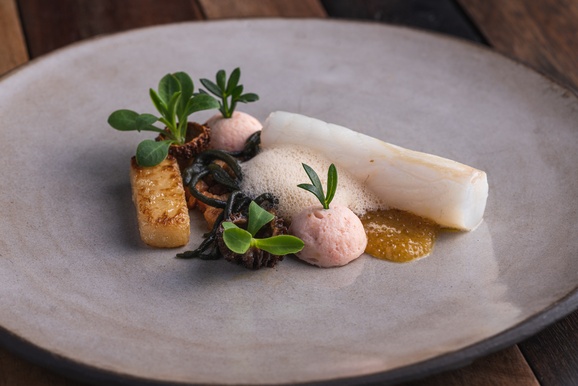 After a sea buckthorn palate cleanser, came fillet of turbot with cured swordfish bacon, salt baked kolrabi, lobster mousse, lemon oil, tarragon butter, garum (best you don’t know but it’s what the Romans used instead of Worcester sauce), garnished with aquatic plant life such as fork weed and sea campion. The sheer level of detail in these dishes is phenomenal. 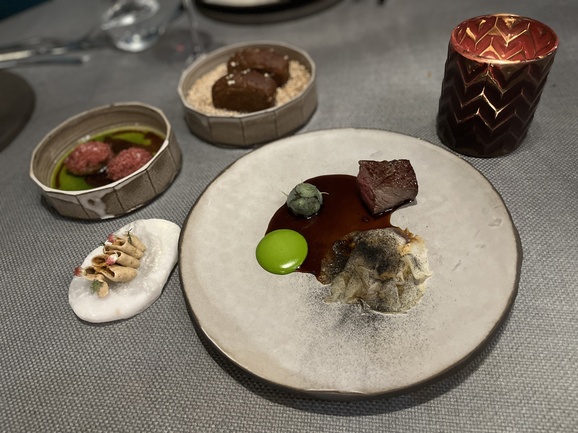 Then comes a showstopper of many parts - ‘Some Beef, It’s Bones and Whey Soured Onion.’ Several dozen components aim to get the best out of the beast, and they all worked in total harmony. Top credit goes to the glossy and slightly sticky gravy, with special mentions for the tiny rag pudding wrapped in nasturtium leaves, the croutons cooked in beef dripping, and individual loaves of wheat beer and black strap molasses with a beautiful wiggle-waggle (technical term) of bone marrow and burnt ends butter. Jesus.

I’m not sure what the deal is for vegetarians and vegans, but when Wood called the day before to confirm our reservation they asked if we had any dietary requirements, so you’ll have to let them know. 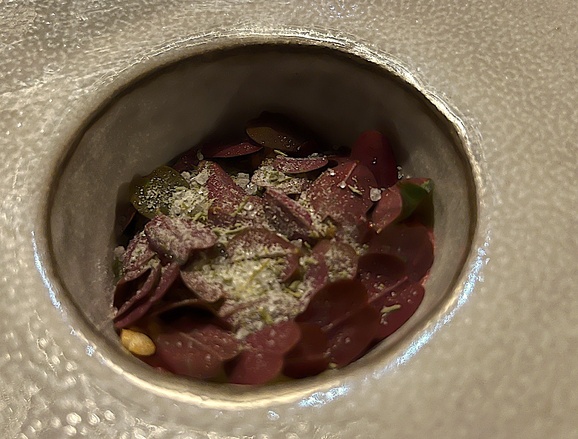 There are two pudding courses – neither of which would have looked out of place in a posh Lakeside hotel. The first, Yorkshire forced rhubarb poached in syrup with a cultured ewe’s milk mousse and ‘the tree from last Christmas’ which turned out to be sugar infused with Douglas Fir. 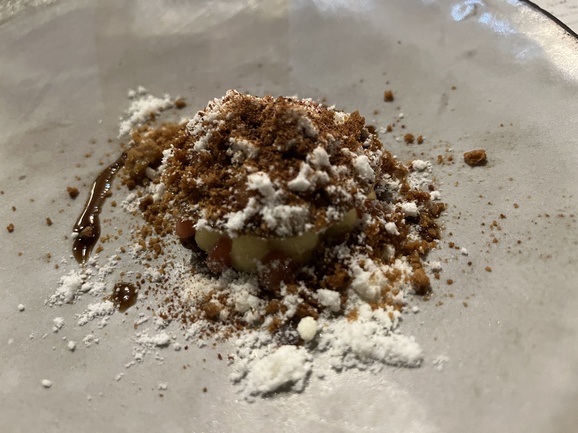 The second, simply named ‘Brown Butter Artichoke with Black Apple’ had sticky toffee vibes and a satisfying crack when you broke into it to get to the tonka bean brûlée underneath. (There’s a fuller description on Simon’s Instagram involving umeboshi, maltodextrin, rare vinegar and beurre noisette if you want to go into more detail.)

If all that isn’t enough for you, you are welcome to go upstairs to Wood’s new standalone wine and cheese experience, Homage – read more about that HERE because I’ve exhausted my word count and it deserves an article entirely to itself. 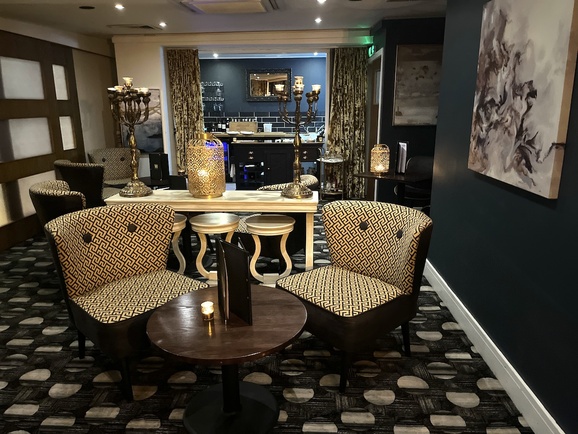 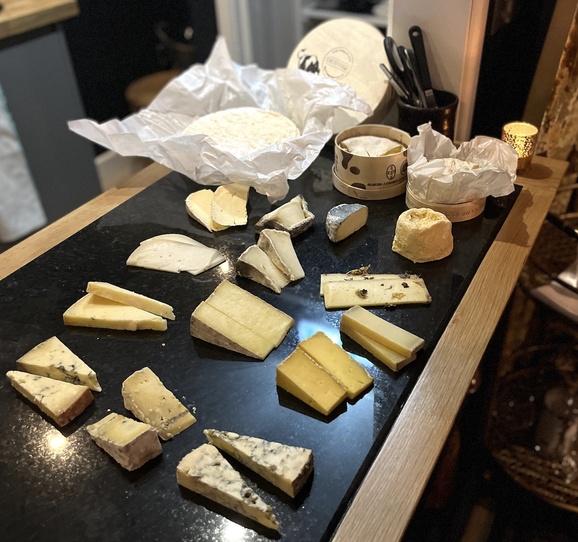 Yes, a meal at Wood is quite the investment. Yes, it’s not really an everyday kind of restaurant. But also, yes, it IS value for money, and if Simon Wood can sustain this standard of cooking, there are definitely more awards heading his way.