What to order – Maray

After enjoying huge success in its native Liverpool (where they have three sites) Maray headed down the M62 to open a restaurant in Manchester in July. They have taken over a ground floor site on Brazennose Street, right by the Hidden Gem church – it’s now the largest restaurant in the group. 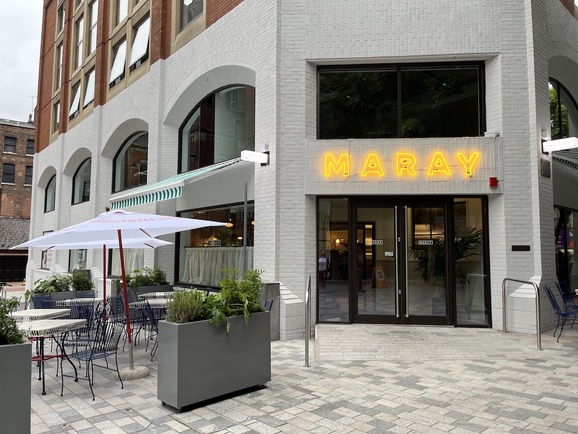 In theory, Lincoln Square is an ideal location. A very central cut through from Deansgate to Albert Square. But historically, there’s never been much going on there. Wing’s Chinese restaurant seemed to enjoy some reasonable (and unfathomable) popularity, but it’s always been a bit of a no-man’s land. 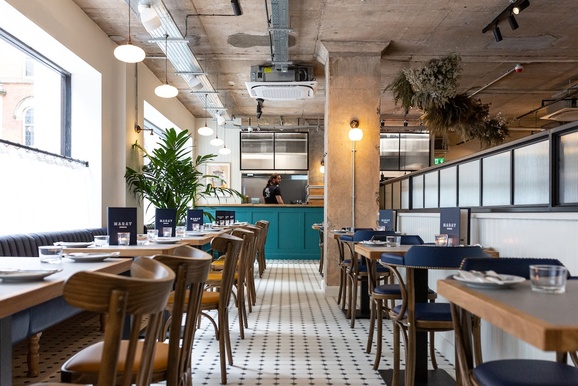 That’s all set to change as property developers such as Bruntwood Works and Marshall are currently working on various office buildings and retail units to bring this part of the city centre back to life. Maray is the first to open on the new look Lincoln Square, and it comes with a gorgeous little outdoor terrace for watching the world go by. 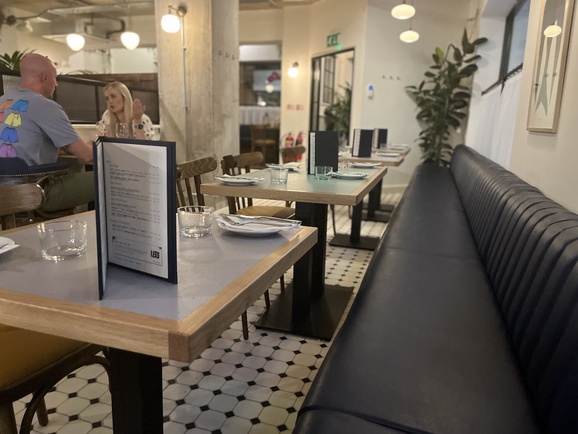 So what is it? Maray sounds French. Does it serve French food?

Not exactly. The concept was inspired by (and named after) the owners' experiences in the Le Marais district of Paris. The vibrant arrondissement is well known for its bustling Middle Eastern restaurants and stand out cocktail bars. So rather than frog’s legs and snails, we’re talking more hummus and falafel. 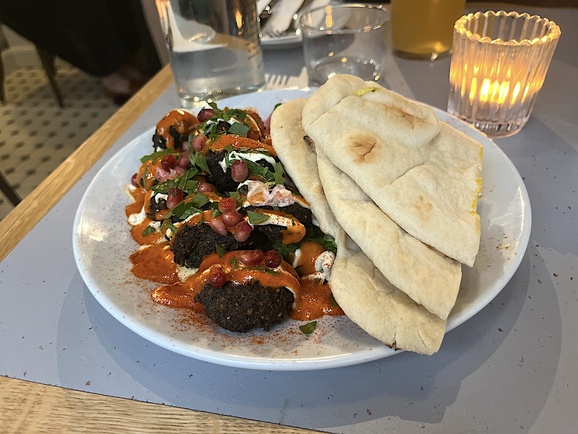 Their menu features a selection of hot and cold mezze, and small plates like falafel, lamb shawarma, and baked halloumi. Their signature dishes include ‘disco cauliflower’ (£7.75), served whole and doused in chermoula, harissa, tahini, and yoghurt, with pomegranate, almonds and fresh herbs.So, expect lots of full flavours, dips, and tasty things that arrive as and when, to pick at over drinks and conversation. 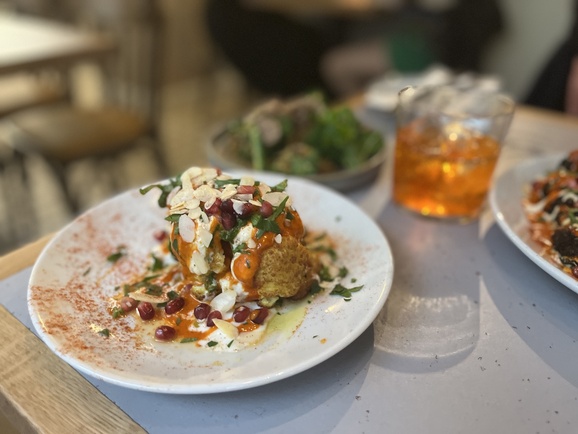 This sort of dining is ideal when there’s a group of you with different tastes and dietary requirements. There are plenty of full flavoured veggie options like hummus (£4), labneh with aubergine and beetroot (£6.50) and the bigger falafel sharer which comes with hummus, tabbouleh, zhug, tahini, flatbread, pickles (£14.50). Vegans can choose from their own dedicated menu which features loads of plant-based mezze, small plates and even a couple of desserts. They won’t go hungry here. 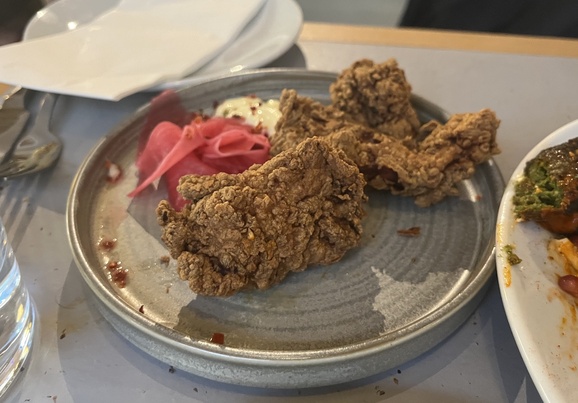 Meat and fish dishes take up less room on the menu and include Maray’s crispy fried chicken with pickles and aioli (£8.50) and pork collar with tahini, amba, date syrup, confit garlic (£12.) They use all the tricks here to get extra flavour into everything with spices, fresh herbs, sharp pickles, sweet pomegranate seeds, smooth tahini and crispy onions. 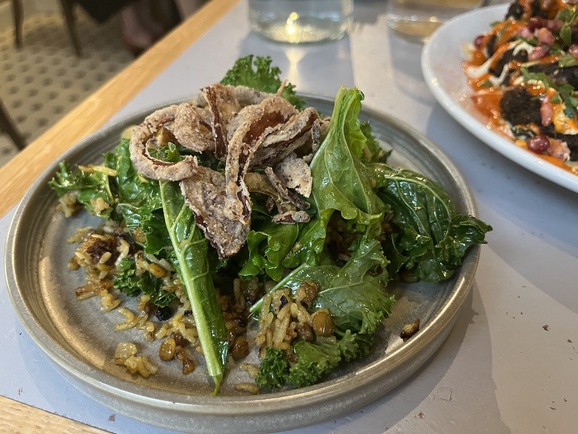 A seemingly neutral side dish of mejadara (Arabic lentils and rice) comes pimped up with crispy kale, Aleppo chilli oil and raisins to create more than the sum of its parts. Even their chips (£5.50) are smothered in hummus and zhug - a green hot sauce from Yemen.

And Maray has paid just as much attention to drink. The cocktail list is divided into staples, short drinks, long drinks, low and no booze, and their ‘picks’. A Peddler (£8) was a great summer alternative to a negroni made with Aperol, Macedonian white wine and rhubarb. Beers are also available including a food friendly IPA they created with Manchester’s Track Brewery. Collaborations with likeminded businesses (like the one they did with Bundobust) are Maray’s thing, which shows a generosity of spirit and a willingness to share ideas and influences. 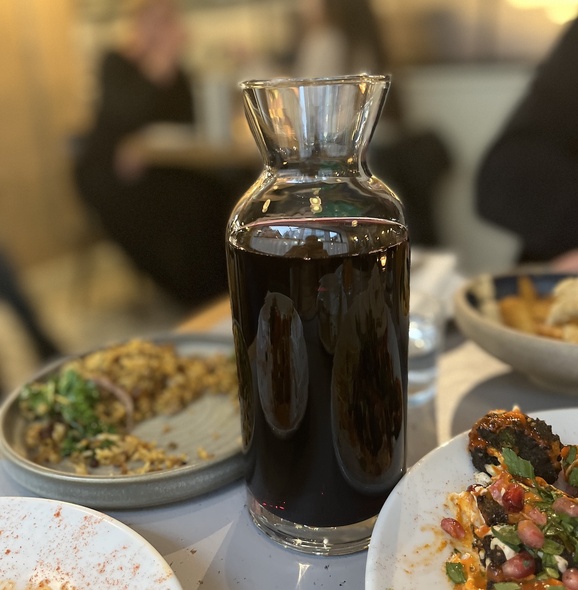 The wine list is more interesting than your average restaurant affair with many offered by glass, carafe and bottle lying within an affordable range between £20-£45. There are a few from France and Italy, but most are interesting, easy drinking wines from ancient wine making territories such as Lebanon, Greece, Cyprus, Croatia, Turkey and North Macedonia. Many are produced in a slower, more natural way with less additives and mucking about involved – and they’ve all been chosen to match this kind of food. 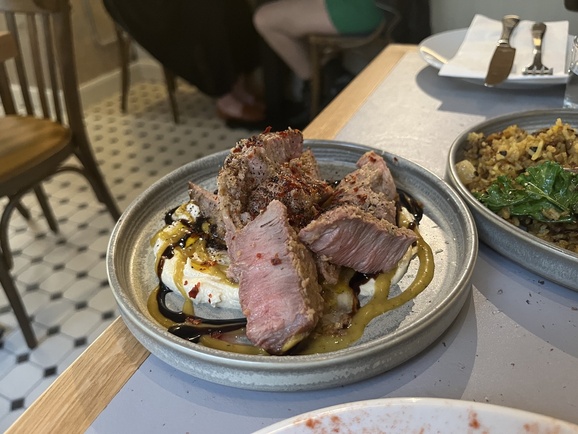 The only trouble with a menu of such small, delicious plates is that the costs can mount up. A meal for two with half a dozen sharing plates, wine and a couple of cocktails came to around £90. But it’s also a great place for popping into sitting on the terrace with a drink and a bowl of those hummus zhug chips if you want to graze well on a budget. 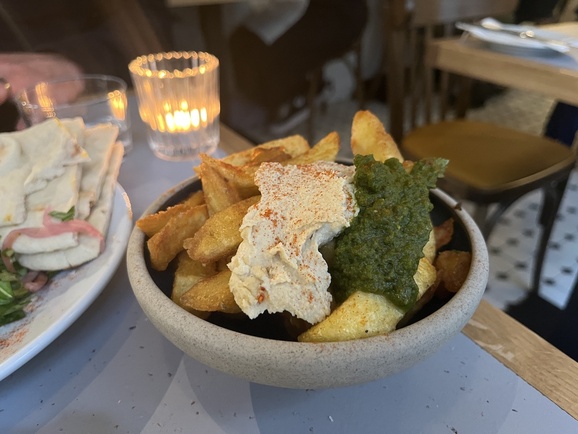 Our visit was on a mid-week evening only a few weeks after Maray opened, and the place was absolutely buzzing. Staff are friendly and on the ball, with plates and drinks flying around the place like they would be in Le Marais itself. It looks like the owners have fulfilled their brief and Manchester has already taken Maray into their hearts.